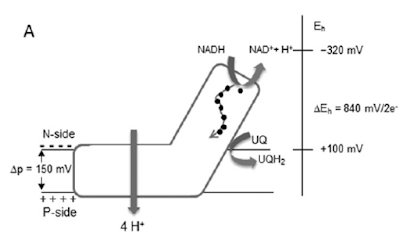 It shows that taking two electrons from NADH and dropping them to CoQ provides a Gibbs free energy of 840mV for the pair. That's all well and good and is why cells love oxygen based electron transport chains. But I'd like to look at this in reverse. We know that complex I works perfectly well in reverse. So we can say that dropping four protons from extracellular to intracellular down a membrane voltage of 150mV across a proton tight membrane will allow the performance of 840mV of work.

For complex I running in reverse this 840mV of work is always used for NADH generation from NAD+ (or superoxide generation) because that's the unit bolted on to the membrane arm. Other metabolic units can be used in place of NADH dehydrogenase and many of these can be found in various bacteria using various substrates with various numbers of antiporter-like subunits in the membrane arm. All will work in reverse and provide/utilise differing Gibbs free energies.

So I would like to view the membrane arm of all of these complexes as a machine in its own right which, when running in reverse, can harvest the energy available from a proton gradient for whatever function the cell might like. Obviously this is not the current arrangement, but is possible.

So here is the intact membrane arm of the complex I of T thermophilus, once again taken from Luca et al 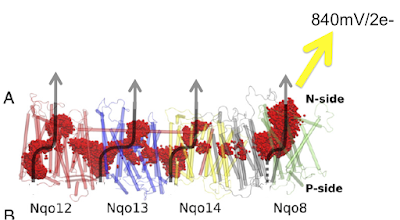 running in reverse to give 840mV/2e- of usable energy. As in the last post we can imagine each proton passing through each channel "kicks" to the right ('cos we're running in reverse here) until the cumulation of four "kicks" is enough to cause the conformation change in Nqo 8 which drives two electrons back up the FeS chain to an NAD+. Think of the membrane arm as a machine to accumulate multiple "kicks" to give a big Gibbs free energy.

Now let's remove some of the sub units and see what we get. How about this: 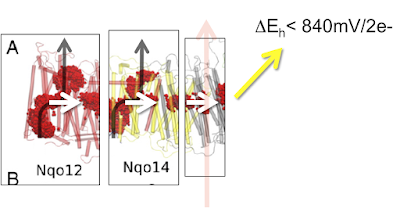 Two proton translocations will provide much less Gibbs free energy than four proton translocations. I've faintly allowed a third proton channel but there is no suggestion this is a functional feature of complex I at all. It's Nqo 10, never mentioned in the paper. Note that all of the subunits are kicking in the same direction.

The above is obviously the basis of the MRP antiporter, which looks like this: 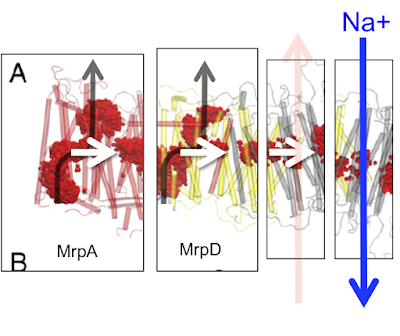 where the energy of two protons is cumulated to allow a single Na+ ion to be extruded. How much of a Gibbs free energy will be developed by the two protons will obviously be influenced by the membrane voltage through which the protons fall. It will also be influenced by the permeability to protons of the membrane in which MRP is embedded. If the membrane was 100% permeable to protons there is no point trying to harvest a gradient which isn't there. The more permeable the membrane the less energy can be harvested per proton. But we do know that in E coli under CCCP with a membrane voltage of as little as 15mV that MRP can cumulate enough Gibbs free energy to antiport Na+ when monogenetic antiporters fail completely.

In the ancestral hydrothermal vent scenario a membrane voltage from the pH gradient between vent and oceanic fluids might be, ideally, around 150-200mV. I still consider MRP is most likely an adaptation to allow colonisation of vent environments where apposition of fluids is not perfect or some mixing has already occurred and the available membrane voltage might be very low. Given MRP LUCA might survive on the edges of vents in addition to thriving in the luxurious conditions of perfect apposition near the centre.

A step on from MRP is, hypothetically, to add a power unit which will allow Na+ pumping when membrane voltage is too low even for MRP. You can think of this as an adaptation to the tail end of the vent system. Some membrane voltage is still present as are complex molecules (from dying prokaryotes in the better vent environments) out of which ferredoxin can be synthesised. This is not quite the membrane bound hydrogenase of P furiosus as we will see. It's an augmented "kick-to-the-right" through MRP to assist the generation of enough Gibbs free energy to allow Na+ extrusion: 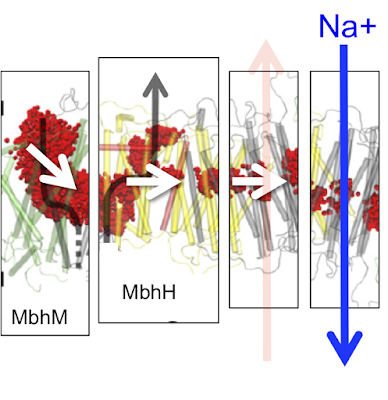 Notice that all of the "kick" arrows run in the same direction as for all of the illustrations in this post, looking to generate a significant Gibbs free energy at the right hand end.

The final stage of generating the MBH of P furiosus (and freedom from the vent gradient completely) is like this: We have to reverse the direction of the proton travel in MBH subunit H. The "kick" from proton ingress is to the right. We want to impose a kick towards the left to reverse the proton flow to give egress, using ferredoxin power. This requires a barrier between MbhM and MbhH to stop that kick to the right, completely different to complex I and any doodle so far. As Yu at al comment in the legend to Figure 3

and in the legend to Figure S4:

"Note the large gap between subunits M and H in MBH (A). There are four elongated densities located to the lower region of the gap (A) inset; marked by blue dashed lines), which stack against several hydrophobic regions of subunits M and H. These densities are likely from two phospholipid molecules that may stabilize the structure and prevent ion leakage across the membrane bilayer. The dashed curves in (C) and (D) highlight the fact that the chain of hydrophilic residues found in complex I is continuous (D), but is discontinuous in MBH (C)".

This is the genuine article: 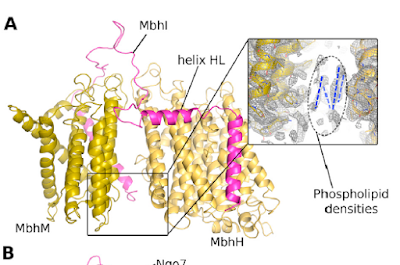 and my version, more crudely: 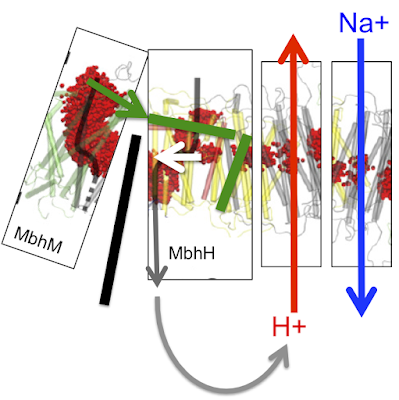 As well as stopping MbhM "kicking" the central water channel protons of MbhH to the right, the conformation change from the NiFe hydrogenase has to be imposed on MbhH to force a proton outwards.

So the white arrow of proton "kick" in the central water channel of MbhH is reversed by the green cranks using the power from the hydrogenase (green arrow) to enforce this. The bright red proton channel is present as specified by Yu et al and is both essential and functional. Quite what the remnant of this is doing complex I I don't know and quite what the proton channel within MbhM is preserved for I also can't imagine (yet). But the general principles of proton movement as set down here are much more satisfying than my initial thoughts on MRP and MBH.