Surwit diet and derivatives (2) It's the insulin

I've been spending some time re-reading a couple of papers out of Jim Johnson's lab and I'll start with this one because it has a core message which is absolutely crucial and possibly under appreciated. Sorry if the text is a bit repetitive but the idea is not completely intuitive.

The mice in this study were full knockouts for the Ins2 gene and also had either no knockout or half knockout of the Ins1 gene. Reduced insulin gene dose reduces insulin secretion which completely protected them from the obesogenic effect of the Surwit (D12330) diet. You cannot become hyperinsulinaemic in response to Surwit's maltodextrin/sucrose if you have only one out of 4 insulin genes functioning (with two out of four you can). Lack of hyperinsulinaemia normalises fat storage as one effect. Lack of hyperinsulinaemia also eliminates long term insulin-induced insulin resistance as a second, non related effect. Both effects are independently the direct result of reduced insulin exposure. The mice stay slim because they are eu-insulinaemic on a Surwit diet. The mice stay insulin sensitive because they are eu-insulinaemic on a Surwit diet. One cause, two responses. Shared causality tends to give correlated effects. But we all know about correleations and causality...

Okay, have some graphs: 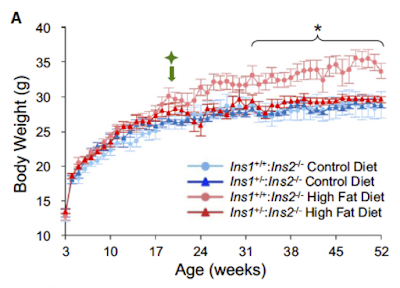 And insulin resistance: just consider the 52 week values here, these mice are a bit hit and miss re glucose/insulin function very early in life. By a year they show their true phenotype. 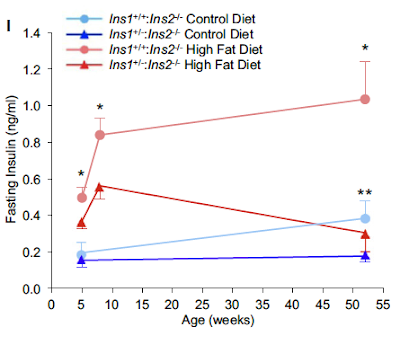 Just to reiterate: On the obesogenic diet fasting insulin is high because there has been a year of exposure to high insulin from the maltodextrin/sucrose of the Surwit diet when combined with a fairly normal pancreas, pink circles. The red triangles are the same diet but with blunted insulin exposure due to their Ins1 partial gene knockout. Ergo, low insulin exposure is causative of low insulin resistance at a year of age, even on the Surwit diet.

I'll take a brief pause here for that to sink in before looking at the next paper from Jim Johnson's lab which translates these findings in to longevity studies. Which are really weird.

Labels: Surwit diet and derivatives (2) It's the insulin

>but the idea in not completely intuitive.
in=>is

Awesome paper and review Peter. It's astounding that we don't measure fasting insulin levels when getting a physical. I always felt it would be nice to start tracking it in our teenage years, but that might facilitate major lifestyle changes that would cut into the bottom line of the healthcare providers and drug companies. Lol!

As with any metric, you have to look at it as one measure. Why did I get the 33 and 23.8? I have no idea. I went on vacation after getting the 33, where I would naturally eat more carbs (limited options) and got a 23.8; insulin went down. I hypothesize that it's related to what you ate the day before, but since I can't test insulin regularly, I don't know.

As long as you realize that a single test doesn't say much, then I think fasting insulin can be useful.

Ctviggen, that's interesting. Thanks for sharing your experience with testing. I wish they had a validated in home test like they do with glucose.

I am a huge proponent of functional strength training with a little bit of tabata/HIIT sprinkled in. I have done HIIT tabata a couple times a week for around 2 years now and just started adding heavier type strength training in. I didn't realize just how much I missed carrying around a little bit of muscle (my wife can't keep her hands off of me lol) and it makes doing tough farm chores that much easier. The tabata/HIIT is still important for increasing work capacity and depleting glycogen, so I can tolerate more carbs when I want to splurge. I have tested though, so I'm not sure what kind of impact it has had. I'm only working out 2 days a week and my eventually add the tabata back in to make it 3 once we can start having our group class again.

I have been doing IF most days of the week for over 15 years ago, so it's actually hard for me to eat enough to complement the strength training with enough protein/calories. I also feel walking is underated. Due to the farm and the nature of my regular job, I never sit unless I am in the car or eating dinner. I feel this gives me an advantage over other people who fly a desk for a living.

Thanks again for sharing your opinion/experience!