Here is the right hand end of the graph from the last post, showing the partially adjusted all cause mortality for the UK in week 52: 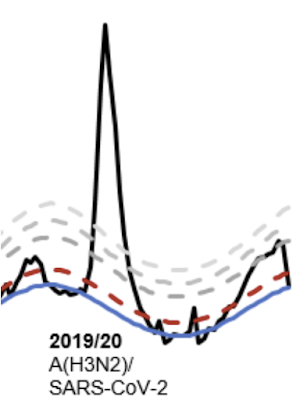 Clearly the down tick at the end is the result of PHE struggling to adjust for the incomplete data from a week with a bank holiday followed by a week with two bank holidays. Paperwork, such as registering deaths, tends not to get done at weekends or on bank holidays.
So, theoretically, we could have had any of the red dashed line corrections: 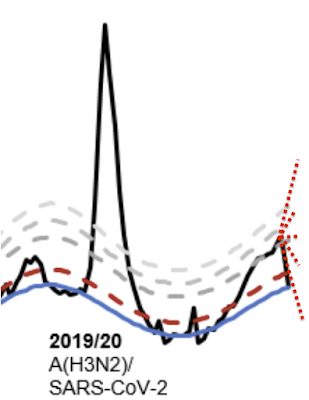 EDIT We now have the 2021 week 2 report with more delayed registrations included. Looks like all cause mortality is now on a par with 2017/18. Still watching... 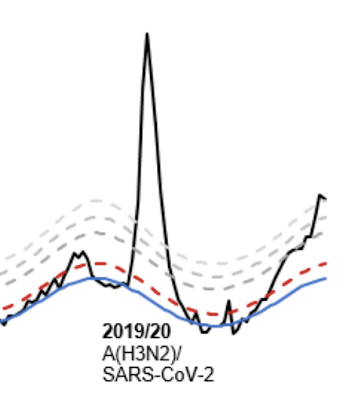 END EDIT
What happened when the majority (most, though not all, comes through within a week) of data were added in? On the 7th of January an update was posted so here is the original graph directly alongside the new graph. Again, ignore the downstroke: 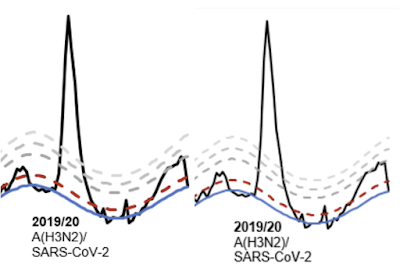 If anyone is struggling to see the difference I've circled the important areas in red: 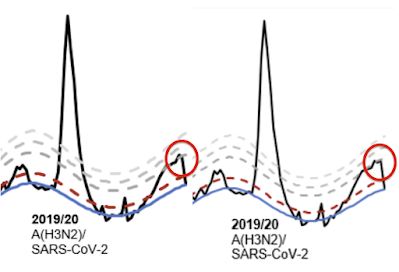 To put the current situation in to perspective I've pulled the curve from the last years during which we had a significant winter flu epidemic, 2017/18: 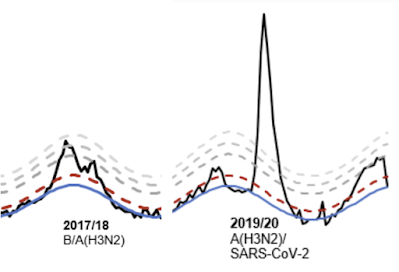 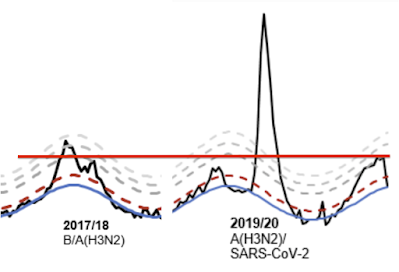 It's also worth noting, again on a terribly parochial UK basis, that the winter peak in all cause mortality is almost always at the end of the first week of January. As in now, though the numbers will take a week or two to fully come in. This year may be typical, it may not. So far it's typical.
I have absolutely no doubt whatsoever that work in the ITUs (which are busy but not full, on a national basis) is hell at the moment. In hot-spots, worse. Given the level of barrier nursing needed, staff shortages because people are not allowed back to work until they eventually become PCR-ve (which can take months), social distancing within wards etc life must be awful and exhausting.
I absolutely stand ready to accept that there is a catastrophe ongoing at the moment. It is quite possible that this winter's peak deaths will exceed that of 2017/18.
So far it hasn't.
I would suggest that the Guardian and the BBC may not be the most reliable sources of information about the current situation in the UK.
Just sayin'.
Peter
Another (as so often!) addendum:
Here are the ITU admissions for COVID-19 from ICNARC (which I consider to be unbiased reporting) up until just before Christmas:
which looks pretty grim, despite UK ITUs being at under 100% occupancy. But these are just COVID-19 patients. I don't have a similar curve for non-COVID-19 patients, but I do have this graph which includes both groups (and the rest of England), should they go on to die: 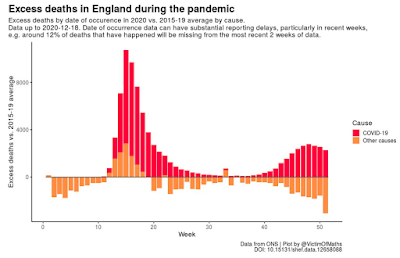 The last column is too low in both death categories due to delayed reporting, as always.
It's quite clear that for every death from COVID-19 there is nearly one less death from anything else. It could be that the virus is so lethal it is impossible to die quickly enough from anything else before it gets you.
Or it could be that managing to get a SARS-CoV-2 PCR-ve death certificate is becoming harder and harder to achieve in a hospital setting when PCRs are still being run to 45 cycles during a winter of endemic COVID-19.
Posted by Peter at Tuesday, January 12, 2021

As I posted in the previous thread, while there is local excess mortality in Germany (especially in Saxonia), on the national level, an effect can only be seen when you compare weekly deaths against the prior years. When you take into account the increase of people in the 80+ group and increases in life expectancy, in all likelyhood deaths will be lower than expected from extrapolating past trends for 2020.

It is also quite possible that Covid is killing a significant population that was not yet on death's door. At the same time, distancing is keeping people from getting killed in road accidents or catching nasty flus. This positive effect seems to outpace any negative effect from delayed medical treatment for other conditions or alcohol/drug or mental illness related deaths.

The big question that will be hard to answer is if Covid is taking more person years than a bad flu season, by itself or after subtracting the positive effects.

The other question is what kind of deaths would we see if there was no distancing / lockdown. Would it be like Bergomo / NY / London during the first or Saxonia during the second wave? Or would something like this not happen again because enough people are partially or fully immune?

Mean ICU beds occupied for December was 3600. I've lost the chart for current occupancy but it's not 100%, and in winter 100% occupancy is normal. The problem is lack of staff and logistical issues secondary to COVID distancing and persistent PCR+ve swabs from health care professionals eight weeks after they recovered from the virus themselves.

No translation needed really, just look at the graph of infections / 100,000 / week. Ireland went into second lockdown about three weeks earlier than Germany entered its "lockdown light". It was hailed by many epidomoligsts in Germany as an example of what a well-coordinated lockdown could achieve.

They reopened when they had brought their numbers down only to be hit with the mutation, which has gone from 9% in the week ending Dec. 20th to 40% now.


This shows us very clearly what can happen even in a population that has seen considerable infections previously. Let's hope their death toll will not be as bad as the current rate of detected infections might lead one to expect.

Eric, you believe too much of what you read!

Peter, do you have legimate doubts about the Irish numbers except that they may comprise asymptomatic infections?

Peter - please correct your post. You said healthcare staff "not allowed back to work until they eventually become PCR-ve" This is incorrect. Healthcare staff are asked to self isolate for 10 days following a positive test (14 days in severe illness), and then return to work. They are expressly told not to retest for 90 days following a positive test to avoid post infectious false positive results.

On another note, if you are still saying ICU capacity is not full, you are wrong.
https://www.hsj.co.uk/coronavirus/london-critical-care-patients-could-be-sent-to-yorkshire-as-capitals-icus-top-100pc-occupancy/7029237.article

In defense of Peter, he wrote that capacity wasn't full on a national level.

I think what should worry us is that London can have this much of a second wave, as did Stockholm earlier when they should have attained herd immunity by autumn if assumptions about IFR are half right.

From the newsticker at spiegel.de, translated with deepl with minor corrections by me:

According to preliminary calculations by Statistik Austria (federal statistics office), there were about 90,000 deaths in Austria last year - an increase of almost eleven percent compared to the averages of the previous five years.

The so-called excess mortality is clearly more pronounced than in years with strong flu waves. A particularly strong increase - due to a flu wave in winter and a hot summer at the same time - was recorded in 2015 with 6.3 per cent.

"With a strong uptake of vaccinations and after the pandemic has been overcome, it can be assumed that life expectancy will return to the growth trend in the medium term. Experience from stronger flu years shows something similar," said Statistics Austria Director General Tobias Thomas.


Now, as I have explained before, we actually expect deaths to go up every year because teh 80+ age group keeps becoming larger. Life expectancy dropping by half a year sounds significant, though. I must admit I have not headed over to the original press release nor tried to understand the algorithm for calculating life expectancy.