ROS (01) Insulins are ubiquitous in eukaryotes

I've had this paper lying around for years:
Role of Insulin-Induced Reactive Oxygen Species in the Insulin Signaling Pathway
Figure 4, shown below, sums up why it interests me 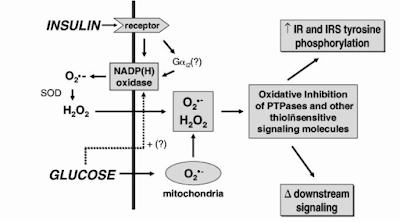 Brief aside: The role of glucose in generating ROS from mitochondria is, to me, extremely dubious. It certainly can occur but it needs the activation of the glycerophosphate shuttle, which doesn't get a mention. But the GPS is how we convert cytoplasmic NADH in to mitochondrially inputted FADH2, with ROS generation resulting from the raised FADH2:NADH ratio intrinsic to this conversion acting on the CoQ couple. It will apply in the presence of insulin, not isolated hyperglycaemia. If you slog through the refs trail (not good) you need to realise FBS = insulin/IGF-1. Also few people even think of fatty acids in this respect, a serious omission. Enough of mitochondria, back to the cytoplasm. End aside.
It's worth pointing out that the insulin receptor is thought to act as a G-protein coupled receptor which signals to an NADPH oxidase (probably NOX4) using a specific G protein. The NADPH oxidase generates H2O2 extracellularly (this becomes important in future posts) which re-enters the cell (some papers suggest there is a specific transporter) to oxidise cysteines on protein tyrosine phosphatases, disabling these enzymes. Without PTPases maintaining the suppression of insulin signalling both the insulin receptor and insulin receptor substrates autophosphorylate and so signalling takes off.
That's all pretty straightforward and is verging on textbook.
Nothing happens without ROS generation.
This led me down a rabbit hole, thinking about how primordial insulin signalling might be and how primordial the ROS generation might be. Is insulin core, with ROS as a second messenger? People may have noticed that the most basic signalling is what interests me.
How far back does insulin go? If we have a look at this review
Insulin-like signaling within and beyond metazoans

we can see that there is a recognisable insulin like receptor stemming from the common ancestor leading to both ourselves and sponges. That's pretty far back, marked by the blue lineage arrows in Figure 1 from the review: 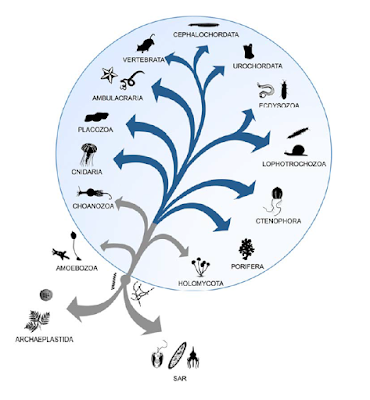 Insulin signalling is thought to be present in most, but not quite all, metazoans (blue circle).
The review looks at the evidence for insulin signalling in yeasts, plants and a ciliated protozoan.
Sacchromyces has no suggestion of an insulin receptor. However it responds to exogenous human insulin with a response remarkably recognisable as the response of human cells to insulin.
Plants are more straightforward. They produce an insulin-like cysteine rich peptide which interacts with an insulin-like receptor to induce the effects typically seen in mammalian cells under insulin. In fact using this peptide on adipocytes produces exactly the same effects as human insulin.
Neither the "plant insulin" nor its receptor have anything in common with metazoan insulin/receptor protein amino acid sequences.
Except they have common "shape".  They are immuno-related. They look similar enough (shape/charge distribution) that they can be recognised by the same binding antibody.
Exactly the same findings are duplicatable in the ciliate protozoan T pyriformis as for the Sacchromyces yeast.
So. Different insulin-like hormones, different receptors. Genetically completely unrelated, but causing the cell to respond in the same way.
The simplest answer is convergent evolution, as suggested in the review. I think this is correct. But there is a deeply insightful comment towards the end of the discussion. Almost insightful enough, but ever so slightly not quite there:

"The convergent evolution of ligand-receptor pairs alone cannot explain however the biochemical similarities in the intracellular response to insulin observed outside metazoans, as illustrated above. One way to overcome this seeming inconsistency is by considering that independently evolved upstream components of pathways devoted to processing environmental information may have been tied to evolutionary conserved core metabolic and cellular growth signaling networks".
The most obvious metabolic signalling molecules which adjust core metabolic function and cell growth are the ROS.
Metazoans, plants, yeasts, protozoa; all will use ROS signals to control metabolism and growth. This is the evolutionary conserved process on to which various environmentally responsive ligands and receptors have been co-opted to respond. On at least four separate occasions. My opinion.
A eukaryote is a derivative of a bacterium living inside an archaeon. Information about archaea is remarkably thin on the ground. I expect them to use ROS. Bacteria are more rewarding once you turn to Pubmed.
Perhaps bacteria are where we should be looking to find the origin of the primordial ROS signal.
Peter
Posted by Peter at Monday, January 18, 2021

Interesting. I hope this will be a long series.

Question: Why would convergent evolution need to lend on similar shape? The answer is obvious in case of body shapes (e.g. fish - marine mammals, wings in birds and bats) but seems magical in case of chemical messengers like insulins, where I would expect arbitrary shape.

I've got to stop pulling on strings!

"The cardiolipin analogues of Archaea"

Turns out they find cardiolipin a bit too fragile... Discusses a little bit of archaea energy-production systems.

There was this discovery but it's old news (pun intended)

Thanks Tucker, some interesting links. The concept that glutathione or (in the Archaea) glutathione-like peptides are crucial to “dealing with” ROS is particularly so.

What if you turned that on it’s head and said that small thiol-rich peptides are natural ligands for ROS and sticking four of them together in a crude protein scaffold might just give you insulin. Or plant insulin. Or ciliate insulin. That’s an interesting idea. Putting the -SH moieties in to the correct positions to interact with H2O2 might give you a conserved shape, whichever amino acids you use to do the positioning. Hmmmmm. Reversal of signalling direction would give us something like we see today...

Nice one Pass, a good read

Here's the part of my podcast with Peter where he talks about this paper and its implications https://youtu.be/GaWAoblGbes?t=3360


"found in surprisingly high levels—5 millimolar—concentrations in most cells."

"The ratio of GSH to GSSG determines cell redox status of cells. Healthy cells at rest have a GSH/GSSG ratio >100 while the ratio drops to 1 to 10 in cells exposed to oxidant stress. Glutathione is also recognized as a thiol buffer maintaining sulfhydryl groups of many proteins in their reduced form. Glutathione is produced exclusively in the cytosol and actively pumped into mitochondria"

This idea of convergent evolution is useful to explain the existence of selenium-handling adaptations across a wide and geographically separated range of RNA viruses and other pathogenic microbes.
The viral genome lacks the repair mechanisms that exist within eukaryotic nuclei. And it cannot reliably use small molecule antioxidants to protect it the way we can. It is more dependent on antioxidant proteins, and only selenocysteine allows the incorporation of a very effective reducing element onto a protein (the Zn, Cu, Mg, Fe in dismutase and catalase proteins is not held in an amino acid, so cannot be directly coded for in a viral protein).
All it takes is a mutation that activates a UGA stop codon and incorporates selenocysteine into a protein with a conformation vaguely matching that of GPx. This mutation will be conserved because its genome will be more resistant to mutation. And further accidental copies of the mutated section will also be conserved.
This seems something that could happen many times in different places.

Interesting - when I saw 'selenocysteine' I immediately thought of the iodothyronine deiodinase - There are a bunch of weird exceptions in what happens with selenocysteine.

I wonder if it could also rev-up the mitochondria for the viruses?

When I was digging into thyroid stuff, a possible narrative is that iodine by itself served the role of thyroid hormone at one time. The system requires selenium for the T4 => T3 step. (people sometimes take selenium supplements which gives a transient increase in conversion. There is a big problem with assigning selenium health effects causation -- thyroid hormones effect every cell of the body - but here they talk about immune system modulation.
https://pubmed.ncbi.nlm.nih.gov/16756467/

Selenium is sold as an antiox - but that sort of ignores it's role in enzymes..
(This is a good example of what happens at these high level signalling systems - everything effects everything and produce no end of narratives ))

Thyroid effects mitochondria - increases uncoupling - ROS levels - which you can trace back to selenium, but I think what ever is going on is probably to complex for humans to really understand. There are a lot of nested interacting control loops in the thyroid system..

What are you tending to eat these days?

PuddleG - does that suggest that selenium intake is more of a balancing act in its antiviral versus pro-viral tendencies????


Peter, I also enjoyed the fish in the top right corner of the video. They were obviously very interested in everything you had to say, in a schoolfish kind of way. Just like t'internet really.

Thanks Peter. I expect that since insulin doesnt bind to ROS directly today, there must have been also insertion of several steps into cascade starting with insulin receptor before / after the reversal of signaling direction. Interestingly, the shape of insulins didnt change in any evolutionary branch after separation from ROS.