CD36 is another of those cell surface proteins with an interesting use. It actually does quite a few things, but the one I'm thinking about is its role as Fatty Acid Translocase, hence its other name, FAT. The late 1990s seems to have been a fashionable time for CD36 research and this era has provided a number of interesting papers.

CD36 takes a molecule of free fatty acid, frequently palmitic acid, and transports it through the cell membrane to the cytoplasm, en route for beta oxidation to provide a bucket load of ATP. Of course, the palmitic acid will also signal the induction of insulin resistance. No point burning glucose if you have palmitic acid. Nowadays any competent lab can knock out a specific gene from a mouse and see if the gene loss does anything much. So in a CD36 knockout mouse we have the ability to make the cell membrane largely opaque to palmitic acid. What does this lack of intracellular fatty acids do to insulin sensitivity? 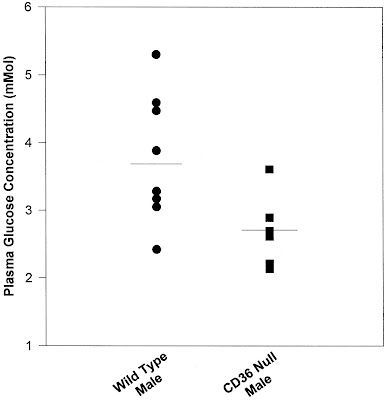 Now this may be hunky dory for a mouse with ad lib access to mouse chow. You can have a nice low blood glucose and probably a nice low insulin level. But what if you were to glycogen deplete the mouse and then make it run to escape from a cat? Its glucose is already low. It can mobilise fatty acids perfectly well, but they can't enter the cells. So no insulin resistance forms and the mouse muscles continue to run on a progressively falling glucose concentration, in a sea of unusable fatty acids, until its brain stops working and the cat gets a mouse sized meal. This hypothesis is untested so far!

These mice also have lower blood insulin too (can't check this fully as it's a Nature pay-per-peep publication and insulin is not important enough to make it in to the abstract, so I'm taking Hajri's word on this). All of this is pretty much as you would expect. These mice are born and bred on glucose and virtually never use any palmitic acid unless they make it de-novo, intracellularly, from glucose. They are probably exquisitely insulin sensitive, for what good that might do them in the wild.


Over expressing CD36 gives the facility to get lots of fatty acids in to cells and this increases both blood glucose and blood insulin due to insulin resistance.


Again, a simple balance, put lots of fatty acids (probably as acyl-CoAs) in the cytoplasm and cells say no to glucose. Hence you need increased levels of insulin to keep blood glucose normal. So is there pathological insulin resistance here? 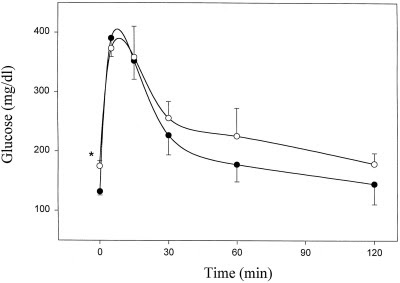 It's worth noting that response to an IV glucose load was NOT damaged in these mice, though there is a "trend towards" higher glucose levels from 30-120 minutes after the bolus in mice over expressing CD36 (open circles).

I think it is a reasonable assumption in these CD36 over expressing mice that the insulin surge following the glucose bolus from the IVGTT can still reduce FFAs, and so increase insulin sensitivity, in exactly the way it should to normalise glucose.

It seems quite likely that the blood insulin will peak at a higher level in the CD36 over-expressing mice. In general, over secreting insulin is probably a Bad Thing. So should a low carbohydrate, high fat eating person be afraid of eating a portion of chips with their roast bellypork? Will it spike glucose and/or insulin to unreasonable levels?

Certainly not. You may have a slightly higher insulin level than a carb eater for an hour or two after 30 grams of potato derived glucose, of course. But a carb eater will not eat a small potato, they will eat ten times that weight of carbohydrate in 24 hours. At least. So a low carbohydrate eater's 24 hour exposure to insulin will be vanishingly small compared to someone nurturing chronic illness using the USA Food Pyramid and eating 300 grams of carbohydrate a day.

So OK, is it acceptable to have a portion of chips with your roast (after being marinaded in lemon juice and then rubbed with a Mexican spice mix) belly pork ? Well, that's a personal decision. Me, I'm fine with it.

You just gave me a serious craving for pork belly. Fortunately, there's a shop down the street that can fill the prescription. Off I go...

Did you mean CD36 knockout mice and not CD32?

Jonathan, good. Time we had that one again I think, but there's the leg of lamb to get through first!