Just before I get back to hepatic insulin resistance I thought I'd just put this topical paper up, in view of the discussions emanating from the "palmitic acid is going to kill you by hyperphagia" post.

It's a classic, coming to me via Barry Groves' book Eat Fat, Get Thin. It took ages to find but is happily available in full text nowadays. Thank you once again to the USA for PubMed.

Back in the early 1960s there were still a number of clinicians alive who thought that that Ancel Keys was an arrogant idiot, a crook, or (more likely) both. The concepts that cholesterol caused heart disease and that drinking corn oil might prevent heart disease via cholesterol lowering were both ideas suitable for contempt.

Hard to say if Rose, Thompson and Williams were part of that perceptive group but anyway, this is the study they carried out.

They had three comparable groups of heart attack victims. One third were left alone to eat eggs, cream, sausages etc, you get the message. I was there in the 1960s in England and we ate that sort of stuff all the time, it was just food. Olive oil was a novelty and I'd never heard of corn oil. The other two groups got oil supplements.

So here's the protocol (all the jpgs just click to enlarge):

Interestingly, here are the changes in TC. Of course back in the 1960s the goal posts were still centred on TC. Look at that cracking drop in the TC of the corn oil victims:

And here are the body counts, the top two lines are the dead people. Bottom right hand corner is the "event free survival" percentages at 2 years.

Fascinatingly they had two cases of diabetes, one in the olive oil group and one in the corn oil group. Both occurred on adding the oil and ameliorated on withdrawal. BUT BUT BUT you gasp, saturated fat, PALMITIC ACID for crying out loud, causes insulin resistance. Lovely oleic acid, darling of Dr Clegg's massive project, does not cause insulin resistance. Surely diabetes is insulin resistance caused by saturated fat? Well, it's your life. Clegg says oleic acid is the health nectar of the gods. Rose has noticed a reversible diabetes trigger and has a body count. Your choice! 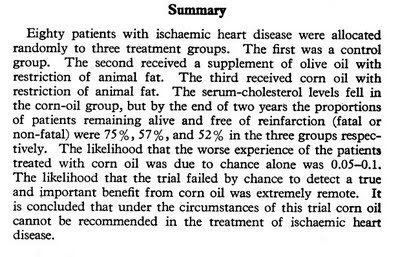 Whenever the lipid hypothesis receives yet another fatal blow, as it does repetitively, there has to be an editorial rushed out with a death reversing ad hoc hypothesis which makes the dead people in the corn oil group pale in to insignificance.

My summary of the editorial:

Finally my view about olive oil:

Not as bad as corn oil but butter is better!

Oh, and for anyone who is thinking of having an indwelling catheter placed in to their third ventricle for palmitic acid infusion: Don't.

It's amazing that olive oil and corn oil showed such similar negative effects. So are monounsaturates to be thrown into the same category as polyunsaturates? Are all vegetable oils apart from coconut simply evil?

And how does the omega-6-causes-inflammation issue fit into this? Corn oil has it, but olive oil doesn't. So what's causing the heart attacks?

Perhaps there´s also a phytotoxin in both that´s causing harm?

On second thought, the harmful effects may have less to do with the use of one oil over the other and more to do with limiting saturated fat...

IMO, dude w/ prediabetes who became diabetic on olive oil would have had an even worse fate if the oil were saturated. My guess? He probably ate a (possibly) low carb diet prior to the study to control his diabetes just happened to be randomized to the olive oil group. I wonder what his diet looked like after the study (when the diabetes abated). Probably not like the control group (who ate MORE of everything – more carbs and much more fat which any reasonable minded person should conclude would be more diabetes-causing than a lower carb, lower fat, lower calorie diet). In other words, I highly doubt this pre diabetic dude was eating a lot of SFA OR carbs after the study. Even if one just goes by carbohydrate and fat, the olive oil group is less apt to cause diabetes. I don’t think it is reasonable to believe there is something about olive oil that can cause diabetes… this defies everything we know about monosaturated fat, including my own personal experience as a real life fatso with a broken metabolism.

Plus lets not forget that a lot of “olive oil” is actually crap. For real. Until relatively recently, you could label any old crap “olive oil” and get away with it. Were these people provided with olive oil or simply given instructions to use it? Because there were (are) a lot of brands of so called “olive oil” that aren’t olive oil.

But really it sounds like they basically took this guys diet and added oil to it. Fat impairs glucose uptake. If you add fat to your (non-carb restricted) diet, you will have higher blood sugar. If you are prediabetic you may become diabetic. SFA doe this to a greater degree than do other fats. Monofats do it the least.

RE: deaths. Not many people died of infarction in any group. 2 in corn, 1 in olive, 0 in control. That could just be random.

Because cals were so different, sudden death doesn't really count. The calories were much lower in the corn/olive groups, and it is known that calorie restriction puts one at risk for succumbing to accidental/infectious disease death. 1500 vs 1900 is a big difference. That's the difference between being calorie restricted (big bag o problems associated with that: hemorrhage and shit for an immune system) and being adequately nourished.

Its, I'll reply as soon as I get chance

Sorry to be so long. I think we're both miss reading it a bit. The caloric intakes in the table for the intervention groups are without the oil, once you include the oil all three were essentially on 2000kcal per day, a perfectly reasonable intake for an adult male.

The primary substitution appears to have been either olive oil or corn oil for carbohydrate, the nature of which is unspecified. So looking at the composite end point (you are right that no one expects to get a mortality P<0.05 with group sizes of 20) all we can really say is that leaving someone alone top continue to eat the diet which gave them a heart attack is better than replacing mixed carbohydrate with either olive oil or corn oil. It may simply reflect that there is a certain level of carbs above which you cannot class yourself as being on a LC diet. It would be interesting to see what butter would have done.......

Im printing it out

These researchers could have predicted that corn oils wasn't a good idea after all for heart "treatment". Two years before their study, a similar study, "Long-term administration of corn oil in management of patients after myocardial infarction: a four-year study", with same amount of corn oil, produced... exactly the same mortality: 5 people died after 27 months - http://www.ncbi.nlm.nih.gov/pmc/articles/PMC1873591/pdf/brmedj02526-0036.pdf

Not the most lucidly written paper! They didn't seem to go in for control groups in those days either but increased mortality does seem to be the outcome compared to their cutting edge anticoagulant therapy.....