Anger vs diet in Japan

Apologies for not getting to reply to emails and to the comments from the last post, several will take some time and there are a few one liner posts to throw out in the mean time. This is one.


I've been following the events at Fukushima with some interest, particularly as we live about 15 miles from Sizewell B, the UK's only commercial pressurised water reactor. One of those I've browsed is this one from the NY Times on the subject of the effect of the disaster on the populace of Fukushima city, where anger at the government's handling of the situation is becoming quite extreme.

"A huge outcry is erupting in Fukushima over what parents say is a blatant government failure to protect their children from dangerous levels of radiation. The issue has prompted unusually direct confrontations in this conflict-averse society, and has quickly become a focal point for anger over Japan’s handling of the accident at the nearby Fukushima Daiichi nuclear power plant, ravaged in the March 11 earthquake and tsunami."

Conflict-averse society is an interesting phrase, certainly to me, as I have just started to re-read Malcolm Carruther's book "The Western Way of Death". I read it as a 20ish year old bloke and stopped fitting half-race cam shafts to the engines of assorted Morris Minors and switched to a Volvo when I got the chance. The current MX5 I drive was not my idea and I still try to follow the advice to use a driver's seat as a mobile arm chair.

Carruthers is highly entertaining in his approach to the cholesterol hypothesis of CVD (it's bollocks, I paraphrase loosely). He focuses on the emotional and catecholamine triggers for heart disease, far more in keeping with a hyperlipid point of view. Adrenaline releases glucose and FFAs at the same time, a bad mix if you are sedentary, okay if you are legging it up a tree when you accidentally almost walk in to a white rhino in the Hluhluwe-Imfolozi game reserve. A foot safari is great...

To get back to the concept that Japan is a "conflict-averse society" and Carruthers' hypothesis that aggression, greed and ambition are major drivers of CVD. You have to decide whether the appalling rice based diet of the Japanese is responsible for their apparently low rate of CVD or whether is it their reluctance to indulge in conflict within a highly structured society which provides the CVD protection. A conflict-averse society...

This links straight back to Marmot's paper, based on his PhD thesis, where Japanese emigrants who maintained a Japanese lifestyle but who adopted the SAD of the 1950s were markedly protected against heart disease. Especially compared to those who behaved as Americans but still ate the traditional Japanese diet. Here is the figure which matters 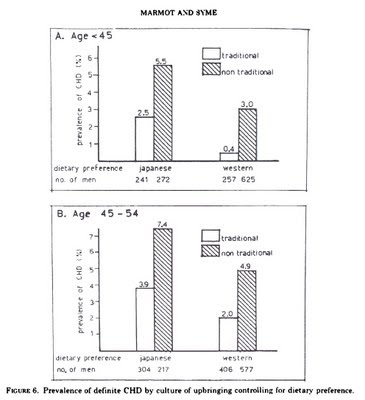 A detailed explanation is here.

This brings to mind the potential for marked injury to the residents of Fukushima, to the point where the injury from anger might outweigh any potential benefits from the hormetic effect of a modest increase in exposure to ionising radiation.

Anger is bad for you.

Fukushima is an angry city. This is far more worrying than the increase in ionising radiation exposure.

Labels: Anger vs diet in Japan

Kind of off-topic, but do Marmot’s data seem to contradict Ni-Hon-San?

Not at all, Ni-Ho-San, from a quick goolge, does not look at lifestyle or anger management. The raw data are probably correct. The ability to see beyond fat=cholesterol=heart disease is the problem.

Marmot appears to have had the sticky problem of being stuck with his data, which did include lifestyle issues, and the inability to fudge it... Not something to worry the average lipidologist.

Peter, thanks very much for this post. Excellent food for thought.

Two years ago I'd suggested to my daughter that we should do a 'bum inspection' of cars at the 2009 auto show in Toronto. I was thinking that the design of car seats had a lot to do with aggressive driving due to restriction of the movement of the diaphragm and upramping of the sympathetic nervous system. SO IT'S TRUE, EH? I figure, car manufacturers have to balance comfort with driver alertness.. but not overdo the alertness component. BTW, we found that BMWs and Lexus provided the most comfy adjustable seats. (This is a partial assessment because honestly, after hours of getting in and out of some of the most uncomfortable cars on Planet Earth, I was exhausted. Neither of us could finish the study in one day and although she went back the next day with the bf, I stayed home to recover.) Fords uniformly have too short seat pans and GMs feel like there is cardboard over the springs........ how hard IS IT to make comfortable seats after decades and decades of manufacturing automobiles?

Doctors routinely put a false cause of death on a Death Certificate according to family wishes. To have a heart attack is considered shameful but a stroke is honourable.

Patients are expected to be totally passive and unquestioning. They are often told a false diagnosis.

Life expectancy figures are total nonsense with over 100,000 unaccounted centenarians and millions more elderly who have been dead for years receiving pensions.

My take is that the interleukins cause both depression and CVD as anyone that has had interferon therapy will tell you.

Japanese life expectancy figures over the last generation are grossly skewed due to fraud. Until recently, families were able to collect pension checks even after the beneficiary's death because they were automatically sent to families' homes and didn't have to be signed by the pensioner personally. This led many families to not declare the death at registry offices in Japan. So you get lots of centenarians popping up who actually died 20 years ago but are just not declared deceased yet.

This fraud scheme has since been cracked down on, so I suspect we're going to see very different life expectancy figures in Japan for the present generation.

Gunther,
I expect life expectancy in Japan to drop at least five years over the next 10-20 years now the fraud has ended.

I've always been very suspicious about the "miraculous" Japanese and Mediterranean Diets. I lived in a Greek neighbourhood in Brisbane Australia. Despite a strong adherence to traditional Greek diets obesity rates were close to 100% in the women and there were very few old men.

I recall that two Japanese people are supposed to be around 130 years old. Neither of them has been seen for over 40 years.

I thought of this post when I came across this today: http://www.democracynow.org/2011/6/10/as_japan_nuclear_crisis_worsens_citizen

There's at least one Japanese doctor making the same point:

"Yes, we’re very concerned that a health study is starting at the end of this month. This is concerning the effects of the Fukushima residents, on the prefectural citizens. It’s headed by a Dr. Shunichi Yamashita, who’s at the Atomic Bomb Research Institute. He’s the radiological health safety risk management adviser for the prefecture. He’s widely shown on national TV. He speaks widely in the prefecture, always saying there’s absolutely no concern with the levels of radiation in Fukushima. He says that mothers, even mothers exposed to 100 millisieverts, pregnant mothers, will not have any effect, health effect. Remember the number 100. Compared to that, the Soviet Union required a mandatory evacuation during Chernobyl at five millisieverts. This doctor is quoted as saying, "The effects of radiation do not come to people that are happy and laughing. They come to people that are weak-spirited, that brood and fret." This is a direct quote. And he’s heading the study. And so, the citizens in Fukushima are very concerned."

Maybe 100 mSv is going well beyond a hormetic dose, but it's an interesting point that he (and you) are making.

I too have no idea what either the minimum or maximum acceptable chronic radiation dose might be but you can certainly see the layers of stress being applied to the Fukushima residents. Beyond not trusting the study head there will also be what Jaworowski calls "pauperisation". The health benefits of money are pretty dramatic on an observational basis... Losing everything you own may not have much in the way of health benefits.

if you are in the evacuation zone, epsecially if this is extended to the city...

Note: Fukushima-shi and Fukushima-ken are quite distinct but the foreign media has gotten it all mixed up.

OK Kayomuchi, also I think I've read somewhere that there is thought to be a "conspiracy" to keep Fukushima City out of any sort of exclusion zone because there is no way of moving and resettling that many people, another source of anger and stress in probably both the Prefecture and the City itself...

I have to say I haven't noticed an exclusion zone in France... I was just curious where the 100mSv fitted in to the range of available background levels. I would say we don't know where 100mSv or 700mSv drop on the hormetic curve. But I think the curve is there.

100mSv per exploding water cooled reactor might be quite a high rate of absorption compared to 700mSv/year.