I was browsing Pubmed looking for other things when I came across this ancient publication by Stephen Phinney, from back in 1980. Those were the days. That was the Summer I contracted mycoplasmal arthritis as a final year vet student seeing practice in North Devon. Lots of NSAIDs then six weeks on tetracyclines once the serology came back positive. Yum. Anyway:

Capacity for Moderate Exercise in Obese Subjects after Adaptation to a Hypocaloric, Ketogenic Diet

Free full text, nice read. Replicable, if you have the equipment.

This is table II. For the first endurance test the treadmill was set at 3 mph with a personalised incline. The same test was then repeated after one and six weeks of a protein supplemented fast. For the six week treadmill run the settings were identical to the first sessions but the subjects wore backpacks containing weights equivalent to the bodyweight that they had lost during the 6 weeks of their fast. There was no exercise training in the interim. 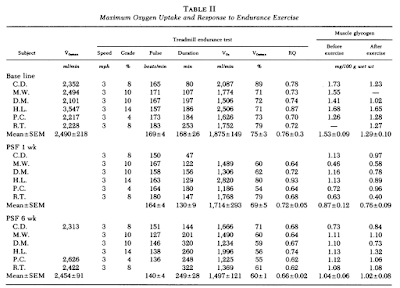 The column to look at is the one in the middle labelled VO2 and expressed as ml/min. On a mixed diet the treadmill settings required a flux of oxygen of 1875ml/min to maintain this significant effort. After 6 weeks on a protein supplemented fast, wearing weights in a backpack to offset the bodyweight loss, with the same treadmill settings, subjects required 1497 ml/min of oxygen. That's a big drop.

Some of this is from the magic of ketones, BHB increasing the free energy of hydrolysis of ATP. A large chunk of this component should have been in place by the one week treadmill test as everyone was well in to ketosis at this time. There was some drop in VO2 needed by this time point, but nowhere like the drop by six weeks.

We can tell by the RQ values that at baseline (mean RQ 0.76) the subjects were oxidising a mixture of fat and carbohydrate (and some protein I guess). At one week there was more fat oxidation occurring (RQ 0.72). By six weeks we have the rather strange RQ of 0.66, lower than is produced even by the oxidation of pure saturated fat.

Oxidation of a fully saturated fat produces an RQ of 0.69. Hmmmmm...

I worked out that oxidising fat, on a simple mathematical basis, should give you a 5% improvement in ATP production per unit oxygen consumed compared with glucose. With Veech's increased Gibbs free energy of ATP hydrolysis while oxidising ketones we gain a combined 5% improvement in ATP supply alongside a decreased total ATP requirement. These are components of the decreased VO2 which didn't make it in to the discussion as they were either unknown (free energy of ATP hydrolysis) or hadn't been worked out (ATP per O2). Not a bad gain for six weeks of fasting. I can see, very clearly, that anyone with a chronic lung disease would be crazy to eat any way other than for a metabolism based on lipid oxidation with ketosis. It just makes sense.

I'll leave it now for this post and put up some ideas about the subnormal RQ figure as the next post.

Oh, memories :) This ís one of the studies that Phinney was referrenig to in his Ketogenic diets and physical performance (Nutrition, 2004). We had a fantastically long fight in which I was totally trashed by The sports people (which I was not, and probably will never be) because it wqas so very, very wrong in 2004...

Great study, especially considering it was done int he 80s!

This always makes me wonder, what RQs & other metrics of CHoOx & FatOx would we see in high-starch (low quality) eating professional Kenyan runners?

Off topic, but I see that Nick Lane has hit the big time now: https://www.gatesnotes.com/Books/The-Vital-Question

Hmmm. interesting. No time to read at the mo but will do!

my hunch is that the low carbers are still adapted to conserving glycogen. Any spare glucose is being tucked away, whereas the low fatters are spilling it all over the place.

the LCers don't oxidize as much CHO because non-oxidative glucose disposal is prioritised instead.

George, don't know about the elites but untrained folks do quite a lot of gluconeogenesis during exercise at 70% VO2 max, I would expect this to be rather glycogen preserving, that "next post" was about this, it's up now. Unless my arithmetic is wrong, as always...

So would 2 (somewhat counter-intuitive) predictions of LCers 'tucking > glucose away' than LFers be:

30min after I do ~1hr of heavy wt lifting topped off with a high-intensity interval training (HIT) my blood sugar can shoot up to 140-167mg/dL! it returns to 80mg/dL, especially if I eat within the next hour.