It would appear that glucosamine, the arthritis neutraceutical, promotes longevity.

This paper is a mix of C. elegans and mouse work. Most of the findings are reasonably transferable but the core finding, that a metabolite of glucosamine inhibits glycolysis, was actually demonstrated in the worm section. Extended longevity was found both in C. elegans and ready-aged mice.

And for longevity in already aged mice: 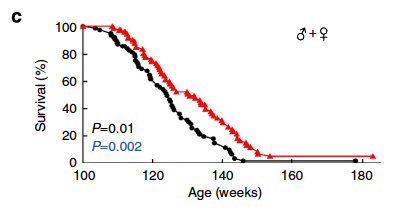 It's worth noting that glucosamine usage in humans is observationally associated with extended lifespan.

To me the core finding is that the inhibition of glycolysis extends life. I like that. In the mice it was also found to cause insulin resistance, mild at the dose rate used in the paper. However I would expect resisting insulin to be associated with extending lifespan. I'm quite keen on extending my own healthspan. The longer this goes on, the happier I'll be. My plan is resist insulin.

Now. Is there any other simple way of inhibiting glycolysis which might rival extended glucosamine administration?

If we go to Veech's isolated, perfused, working rat hearts (again) we can see some interesting things:

I suppose the first thing we have to say is that the heart works quite well on the utterly non physiological substrate of isolated glucose.

Next is that insulin decreases glycolysis compared to this baseline. The increased glucose ingress to the cell is diverted to glycogen synthesis while insulin simultaneously increases the efficiency of the electron transport chain. So net flux through glycolysis drops from 5.6 to 3.8 micromol/min/ml. Ketones (a physiological mix of AcAc and BHB) drop glycolysis from the baseline 5.6  down to 1.7micromoles/min/ml, which I find quite impressive.

As always, Veech maintains a phobia about fat so we have no data about what the addition of fatty acids might do to glycolysis. Enough said that ketones suppress it quite well. Veech has a detailed discussion of the various redox couples which control this process. To a simpleton like myself we can just view the situation as observing when ketones flood the TCA with acetyl-CoA there is nowhere for glycolysis products to go to, so it stops. The effect of redox couples on the energy yield of ATP hydrolysis is a separate consideration.


Glucosamine drops glycolysis in C. elegans by 43% and gives a measurable longevity gain. Ketones in an isolated perfused working rat heart drop glycolysis by 66% and appear, in many papers, to have some favourable effects on many of the problems which come to us with age. I find that interesting.

I wonder what evolution has in mind for that stored glycogen. I'd speculate that the body is likely to stay in ketosis during physical exertion so what the glycogen is good for?

JohnN, the glycogen appears to be very important. As far as I can see exhaustion occurs when muscle glycogen hits a certain level. At this point ox phos seems to stop, lactate pours extracellularly rather than being oxidised in the mitochondria. Hows and whys are of some interest at the moment...

The effect of very low carb on glycogen seems to be immediate; the conventional view is that glycogen is depleted, but this is based on fatigued animal models and adaptation in exercising humans; in human feeding studies glycogen synthesis increases and post-prandial glycogenolysis disappears at zero carb. As PPGLY is a big source of excess PPPG in type 2 diabetes this gives a huge immediate advantage. The hepatic glycogen store depletes, no doubt, this is seen in MMRI NAFLD studies, but there is a stabilising and conservational effect going on.

Re: I'd speculate that the body is likely to stay in ketosis during physical exertion.

Well yes, but AFAIK in non-athletes at least, plasma ketones will only support a moderate level of physical exertion and prolonged or above moderate exertion is increasingly fuelled by glycogen. Trained athletes (esp if keto-adapted) have increased intra-muscular triglyceride (IMTG) that spares glycogen. IMTG is readily replenished by dietary fat. I assume under starvation that replenishment of IMTG is dependent on plasma fatty acid availability and is presumably blunted in the absence of significant dietary fat.

My simplistic take is that under ketosis (starvation) and whilst at low levels of physical activity, the liver is producing glucose that can replenish muscle glycogen stores because day-day muscle energy needs are being met by ketones (presumably because replenishing glycogen for emergency energy expenditure is a survival trait?)

Studies on keto-adapted trained cyclists have shown that lipolysis is actually reduced by up to 60% during moderate/high exercise (IIRC >40% VO2 max) and that muscle energy is predominately a mix of IMTG and glycogen. Exhaustion happens when both of these fuel sources are depleted (approx. 3-4000 Kcal in trained well fed/adapted individuals IIRC).

I have personally tried training on a low carb/low fat diet, after a day or two it takes several days of recuperation to regain energy levels for normal exercise intensity/duration and it isn't much fun. However energy for daily activities is maintained.

I see you didn't mention one of your favorite concepts, the Crabtree effect :) Am I confusing it as the end result of Glucosamine shifting metabolism away from glycolysis (rather than the reason why it does so)?

Volek showed that after 2hrs there was no difference in glycogen replenishment in ultra-distance runners on either a <10% or >60% carb diet http://ketogains.com/2016/01/carb-refeed-ketogenic-diet/ I think this "keto = no bueno for glycolytic activity" mantra is biting the dust. Funny how people think that 'better fat burning' is synonymous to "bad glycolysis/explosivity" - it's not.

I'm trying to get 50 miles once a week at the mo, have a cycle tour in Sept and will have to keep up with a Boy Racer (teehee, that's you Mike!). Fifty miles gives no problems next day so things are looking OK so far, on deeply ketogenic eating. If the waves cooperate I might get to surf tomorrow where the take-off is very anaerobic... Fingers crossed. Back the met office web site!

Re Crabtree: Yes, no glycolysis should reverse Crabtree effect. Interestingly the mice upgraded mitochondrial protein catabolism, not fat. But if the diet was very low fat they might not have had any choice. As always, not enough diet details to be able to tell what was fed. Scrutineers asleep as usual.

SS, I'm not stinting calories as cream and recovery, as above, is good. Some drift down of weight but I'm not planning on this.

When it rains it pours..

Hmmm.. "The increased glucose ingress to the cell is diverted to glycogen synthesis ..."

Something more to ban in sports competition? So pump the glycogen storage before an event - then eat a bowl of rice 45-min before the event?

Study of n=1
I find a small sprinkle of carbs (say 20G) before lifting makes a huge difference - yet my BG stays below 110. More carbs don't do anything more for lifting - and BS starts to go up.

I also found that with very low carb protein made my BG go up - yet with a little exposure to carbs it stops..

It took me about 9 months to be trained to do an intense cardio in a fasted state 2 - 3 years ago. It feels great, but my body generates a fair amount of glucose (up to 125 mg/dL) when I do it. A normal non-sedentary activity doesn't have such effect. My fasting blood sugar is normal (under 100 mg/dL for sure), I have been lowcarbing since 2007.

While looking up the insulin lowering properties of NAG, it was mentioned in several articles going back to one study where children with UC took between 3-6 grams a day to alleviate their symptoms. Most reported some improvements in symptoms. I began it in May but didn't have much improvement. Aftemore research I discovered if the capsule was broken down in the stomach, it converted to a simple sugar. I found some enteric coated capsules in Canada which cost a lot more, I take 3 grams a day. they seem to make a real difference by coating my small intestine and alleviating horrific symptoms. I don't see them lowering insulin, in fact I have gained weight. I also avoid emulsifiers like the plague, ferment heavy cream with an heirloom culture and try to eat high fat. Thank you for bringing NAG to my attention Peter.