In amongst the recent flurry of blogging about calorimetry and associated physiology Mike Eades forwarded this text to me:

Mostly on the basis of its title, I think. It's a very complex paper, drosophila based, couched in terminology which is probably completely routine if you work with flies but as clear as mud if you don't. I think we can reduce the paper to its title, discussion headings and three diagrams, one of which I'm going to butcher, the way you do. It's free full text if anyone wants to bend their brain.

I mean, to a superoxidophile, what more could you ask? Just so long as the superoxide is RET derived from complex I...

OK, now the images. This one is core. It's taken from the Graphical Abstract and looks to be hand drawn in pencil. Note the NDI1 super-fly logo on the chest. This research group is crazy. I like that: 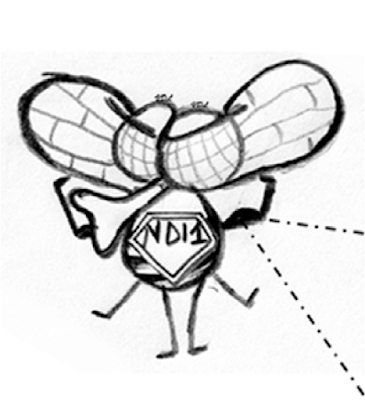 We've met NDI1 before. Its a small NADH oxidase from yeasts which reacts the reducing equivalents from NADH with oxygen to give water, reducing the CoQ couple in the process. It drives, given an adequate delta psi, RET through complex I. Inserting the gene for this protein in to a fly does this to life span: 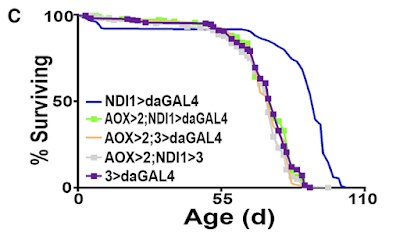 Obviously, the line off to the right represents the NDI1 positive flies. NDI1>daGAL4, as "fly people" might say. They then went on to use an almost infinite supply of other tricks, in other flies, to show that it really is RET through complex I via CoQ reduction that extends life via site specific ROS generation. I won't slog through the arguments, you now know where the paper is!

And here is the lamb to the slaughter picture, presented as part of Figure 2: 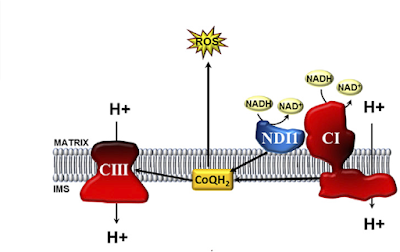 There's NDI1 in blue, using NADH to reduce the CoQ couple and generate ROS. The main thing I dislike about this image is that the ROS seem to be popping out of the CoQ couple. They actually come from RET through complex I, so let's change it so it really looks that way: That's better. Now I, personally, don't have and don't really want to have an NDI1 sitting on the matrix side of my inner mitochondrial membrane. Perhaps there is some similar enzyme available? Ah yes, let's mentally substitute ETFdh: 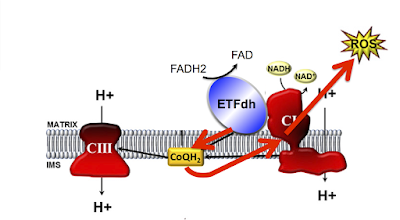 And of course, if we want to drive this process, we need FADH2, transported to ETFdh via electron transporting flavoprotein, generated by the first step of beta oxidation of saturated fats. Any double bonds mean this step gets skipped and all we supply is NADH. If we want FADH2 it's palmitate and stearate all the way: 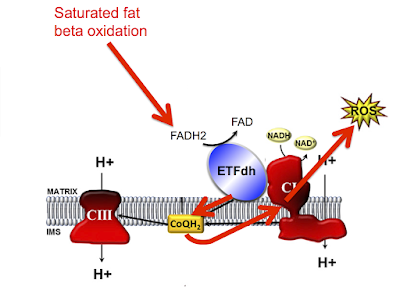 I have absolutely no idea whether using FADH2 from beta oxidation will do, in mammals, what NDI1 does in fruit flies. But I like the paper, and I like that idea.

And the fly doodle of course!

The addendum; because this post is not totally irrelevant to my recent blogging ideas:

Veech doesn't like fatty acid oxidation. He has little time for acetoacetate but loves beta hydroxybutyrate because it, specifically, reduces the NAD+/NADH couple while oxidising the CoQ couple, increasing the redox span. ie BHB oxidises the CoQ couple.

Kwasniewski is very pro saturated fat and rather anti ketosis. He wants FADH2 driven metabolism which enters the ETC by reducing the CoQ couple. He has a disturbing habit of being correct without providing any science.

The flies suggest going with Kwasniewski rather than buying bulk BHB by the tanker-load when it eventually hits the market as an affordable ketone ester. But they're only flies...
Posted by Peter at Sunday, May 15, 2016

I'm not sure if they are implying that the source of the ROS matters?
,.,.

If adequate ROS (I'm betting there is an optimum level) increases life span, and Sat-fats vs PUFA or MUFA increases ROS it implies longer life-span( I always hope quality-of-life goes along with longer spans -- don't want to linger decades in misery ).

So if PUFA and real-anti-oxs( the majority of things that are hyped as anti-ox are doubtful to be so in vivo ) lower ROS - that alone supports eating a low LA diet.
,.,.

The question becomes why ROS matters. There are at least 2 things going on with PUFA and carb consumption vs Sat-fat:

2 - The number of mitochondria. via ROS

Both seem to be bad for life-span. The second one has me wondering about the effect on cancer rates (some data exists that real-anti-ox increases cancer).

A possible explanation - if the number of MT(MiTchondria) is reduced - the total number of copies of MT-DNA is reduced in the cell. If we think of the inside of the cell as having it's own selection process, seems like the likely-hood of having only broken MT goes up with low ROS.

With another speculative jump - the immune system tries to tell cancer cells to die via apoptosis - which is the responsibility of the MT. Cells with broken MT can refuse to die - become zombie cells - hopefully senescence(unable to divide)(senescence cells tend to leak inflammatory cytokins yuck). But if they can divide, they tend to live without the benefit of respiration and instead depend on glycosis. The MT are broken - thus don't die - yes - cancer cells. They tend to be small in size and need higher BG to out-grow the immune system due to their glycolysis dependency. see https://en.wikipedia.org/wiki/Warburg_effect

The above paragraph seems to fit-together - might turn out to be true. Senescence cells might be reduced by fasting or taking semi-toxic stuff ( some of what they claim are anti-ox might actually do good via hormosis ). There are papers that claim that resveratrol reduces vascular cell senescence via attenuation of oxidative stress by SIRT1/NADPH oxidase-dependent mechanisms.

Sadly, I can't trust nutritional papers from the same country where the supplements are manufactured.. When the majority of the nutritional papers are garbage - multiple variables, false logic, or narrative parroting BS.. really hard to know what we know.

You might enjoy this recent interview with Nick Lane (in case you missed it). Energy, life and death, etc. Light entertainment for you, I'm sure. More valuable lay-readership science for the likes of me. Nicely explained. He mentions ketogenic biochemistry too, in passing. Transcript and video available.

Thanks Patrick, will give it a look later. Time to go buy a couple of bantams next...

Fatty acid oxidation and ketosis are coupled mathematically. With all due respect to Veech and his mentor Hans Krebs, quacks try to magically decouple coupled systems; it's not scientific. Ultimately, everything is coupled to varying degrees. Up to the scientist to understand these couplings, and not just magically decouple them.

Here's a fly in the ointment - glycation. Why is HbA1c and its analogues harmful?


But researching this one finds many interesting titbits

Glycation has the potential to alter the biological structure and function of the serum albumin protein. Once it is glycated, it is less efficient for carrying long chain fatty acid.

In experimental model of adipocyte cell lines, albumin-derived AGE has been shown to trigger the generation of intracellular reactive oxygen species leading to an inhibition of glucose uptake.

So excess sugar is throwing in this additional low-level signalling, which is tending to keep nutrients out of cells.