Will fasting destroy your mitochondria? (No).

I started with this paper:

"Prolonged" here means 60 hours. I had to look up "dysfunction" in a dictionary as I feel it carries negative connotations. It does.

Not eating for a couple of days renders your mitochondrial either abnormal or impaired. That's a big assertion to put in to a title.

So I don't like this group. They are fully aware that fasting requires insulin resistance and that this insulin resistance is physiological. Under such conditions there are, undoubtedly, changes in mitochondrial function. What sort of a label you apply to the changes says rather more about the mindset of the authors than it does about the mitochondria. These folks are deep lipophobes.

There are two respiration states under which the mitochondria from fed people outperform those from the same people after a 60 hour fast:

State 3 respiration is when you supply so much ADP that the ATP synthase complex can run at its absolute maximum rate. It's a measure of the ability of the ETC to pass a very high electron flow while using the membrane voltage. Oxygen consumption (a surrogate for electron flow) is reduced in preparations from fasted people.

The second condition where mitochondrial oxygen consumption is reduced by fasting is under pharmacological uncoupling.  FCCP, just such an uncoupler, allows the absolute maximum flow of electrons down the ETC, completely unfettered by any need to drive ATP synthase at all and probably with no delta psi to work against when pumping protons. Under fasting conditions there is measurably less oxygen consumed under FCCP than when tissue is isolated from fed subjects.

Out of interest they also treated a set of mitochondria with oligomycin (which blocks ATP synthase) and checked for physiological uncoupling (state 4 respiration). There is no difference in oxygen consumption under either nutritional state.

How badly are the humans crippled by this level of mitochondrial "dysfunction" under fasting?

"Twenty-four hour energy expenditure during the last 24 h of the 60 h intervention was slightly but significantly reduced upon prolonged fasting (10.88+/- 0.33 vs. 10.30+/- 0.30 MJ/day, in fed versus fasted, respectively, P less than 0.02). The difference was mainly caused by a reduction in diet-induced thermogenesis, and not caused by a decrease in resting metabolic rate (data not shown)".

These subjects went from a free fatty acid concentration of just over 200 micromol/l after an overnight fast to just under 2000 micromol/l (no typo) after a 60 hour fast. Fatty acid oxidation is supposed to be a supply controlled system. With a ten fold rise in a metabolic substrate perhaps we might expect a ten fold rise in ATP production driven by an attempted ten fold rise in membrane potential? Reductio ad absurdum. Do you think we might need some sort of control system to be applied? Like a brake?

The brake looks interesting to me. The next layer to dig in to is this group:

OK, you've read the title. Are they lipophobes? No Brownie points there I'm afraid!

Now, you have to be careful. The 60h starvation folks used permeablised muscle tissue. What every had happened to the mitochondria under starvation is (pretty much) still in place and didn't budge. This next group of lipophobes washed and isolated their mitochondria. We are now dealing with squeaky clean mitochondria with all of the cytoplasm washed off. And all of the fatty acids and their derivatives, along with any cytoplasmic enzymes to interconvert them, also washed off.

In the following diagram they added palmitoyl carnitine to mitochondria being fed on pyruvate and ATP production went through the floor. They could do something similar using palmitoyl-CoA and oleoyl-CoA, even without added carnitine. They could also simply wash those mitochondria to restore pre-lipotoxicity ATP synthesis rates: 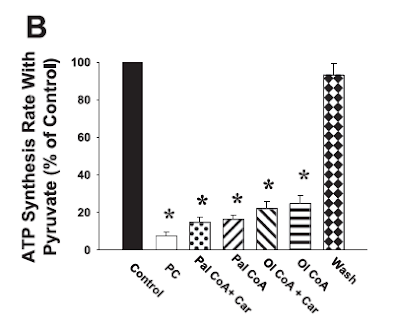 Treating mitochondria with palmitoyl carnitine reduces ATP synthesis by 90%. Washing those mitochondria restores normal function. It looks very much like the site of action of the fatty acid derivatives is a) on the outside of the mitochondria and b) a non-covalently bound effect.

This is what the authors say:

NB I think they mean a positive feedback loop, to be producing runaway mitochondrial dysfunction and an ATP supply crisis. You know, skip a meal and "phut" your mitochondria snuff out.

My impression is slightly different. I look at the lethal effects of my favourite fatty acid's carnitine derivative and ask, scratching my head: How do people function with FFAs of 2000 micromol/l if 5 micromol/l of palmitoyl carnitine is going to kill them?

For a reality check we can just look at those 60 hour fasted people in the respiratory chamber. Are they wanting to die or wanting to go out for a steak?


The mitochondrial-washers are suspicious (but have no evidence) that fatty acid derivatives are dropping in to the binding pocket on complex III where reduced CoQ should be docking and so blocking the ability for electrons to pass from reduced CoQ to complex III. If this is true, and yes the docking site really is very close to the outer surface of the inner mitochondrial membrane, we have a system where fatty acid derivatives can limit the flow of electrons down the ETC to the levels needed for perfect ATP production while maintaining a physiological insulin resistant state to keep the brain supplied with glucose.

We know this system works because people can go without eating for 60 hours without looking anything other than slightly slimmer than they did when they walked in to the respiratory chamber.

We also know that people can go for six weeks on a protein supplemented fast and actually improve their exercise ability, based purely on fatty acid catabolism.

Of course, we must ask what happens to the redox state of the CoQ couple if you point blank refuse to allow reduced CoQ to hand on its electrons on to complex III. All of the CoQ will end up fully reduced. Reverse electron transport through Complex I is inevitable, given a decent membrane voltage. That means targeted superoxide production and the Good Things that flow from this. That means physiological insulin resistance. I view this as one layer up in control systems from the NADH:FADH2 ratio within the mitochondria. Note that the this particular effect of fatty acid derivatives does NOT require active oxidation of those derivatives. There are a number of papers out there where fatty acids induce insulin resistance even when beta oxidation is pharmacologically blocked. The data in this paper are the explanation, they make complete sense (more than you can say for the authors).

Labels: Will fasting destroy your mitochondria? (No).

"they added palmitoyl carnitine to mitochondria being fed on pyruvate and ATP production went through the floor" ===> this makes me think we're seeing a responsive 'energy' organelle maintaining the tight cellular (delta)G'ATP of -56kJ/mol..[despite different resting membrane potentials of various cells]

Going from 200umol/L to 2000umol/L seems like a 'physiological precaution' in the absence of incoming energy. The body hasn't gotten food for a while & sees fit to release supplies of its most abundant fuel into the bloodstream making it readily available throughout the body in order to pre-empting energy dips. What's more, as the papers you cite show, if you suddenly influx energy into the TCA (of all sorts), "a system where fatty acid derivatives can limit the flow of electrons down the ETC to the levels needed for perfect ATP production while maintaining a physiological insulin resistant state to keep the brain supplied with glucose."

We've got enough medical problems to solve - why do they feel the need to invent new ones?

Nice one raphi. My three sequential pushbike rides to Norwich gave BG of 43mg/dl, 52mg/dl then 59mg/dl at the finish. Bit weak at the end of the first one. Each one I’ve gotten fitter and for the last ride I had a superb NW breeze so took the main road home rather than the back lanes, great to turn the big gears and fly, especially on the long down grades… It’s so nice to push yourself without needing to carb load or refuel during the ride.

"Fatty acid oxidation is supposed to be a supply controlled system."

Emphasis on the 'supposed', but then it's no challenge answering if you give so big a hint. It seems they washed something important off the mitochondrion, to me.

The follow on study does look a lot more like real life. But, unless acipimox is accumulating in the mitochs and doing something there, chronically reduced FFAs do seem to have some sort of "unwashable" effect on bare mitochondria... That's not talking about easily removable FFAs in the CoQH2 docking pocket! I don't really trust any of their data or their logic.

This will probably destroy something. Could I possibly interest you in a pea protein and linoleic acid "burger"?