Just a one-liner to bookmark the death of Repatha.

PCSK9 inhibitors have bombed and the cardiology community is in complete denial. Now this is nothing new, it happens on a regular basis. Repatha produced a massive drop in LDL cholesterol and a small drop in cardiac end points. It also produced a small (ns) rise in both total mortality and cardiovascular mortality.


EDIT
I have altered the sentence which used to be here in response to a request from a PR company representing Amgen!!!!!! There's a post about it here.
END EDIT


No-one should ever listen to the cardiovascular community on a cholesterol lowering drug. Instead, just look at the share price of Amgen: 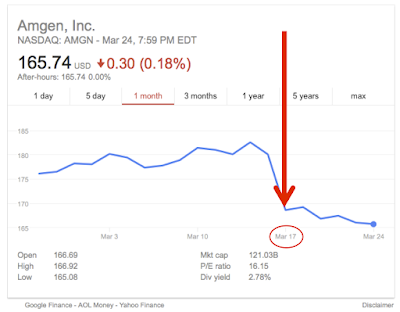 The red arrow indicates the release date of the FOURIER study data on March 17th 2017. It's a acute adverse event signalling the failure of a blockbuster drug. The trend in share price also indicates the conversion of an upward trend in price to a downward trend at the time of this adverse event.

As always, the cholesterol hypothesis is dead. It keeps on being killed but, obviously, it never lies down!

Amgen have invested an unimaginable amount of money in their PCSK9 inhibitor. This is a gross failure of basic research. A nerd with smart phone could have told them they were gambling on a very long shot.

It is an amusing concept, an adverse event for a drug company. (Lots of cheesy jokes to insert here about the statistical significance, relative risk etc :-) )

It reminds of a story I heard about the Victorian Govt.'s method of reducing industrial pollution in the Yarra river: any company using river water had to position their intake some distance downstream of their outlet. Worked really well so I was told. The bottom line became the top line.

Who do you think might have been conning whom in that company? Where did the research dollars actually end up?

Regeneron too -10% in a week, with the significant drop starting on the 17th. Not Sanofi, but there could be complex reasons for that. On the other hand the drops are possibly less marked than one could have expected as profit projections must have changed. (I should note that I have zero expertise in this area.)

There were earlier papers that said that evolocumab lowered Lp(a) and oxLDL:

But in this paper :

They say nothing about Lp(a) -- have to wonder why?

The say nothing about oxLDL -- have to wonder why?

This is personal to me - I'm slowly losing ground to CAD and they put me on this. I will have to look at my Lp(a) and oxLDL levels - but probably will just stop it. ( I wonder if insurance will still pay for it after this paper?).

Malcolm Kendrick weighed in on this as well...

As someone who follows some of the financial markets for my future retirement health, I'm always reluctant to ascribe stock price movements to specific events. Markets may be less complicated than physiology, but they are still sufficiently complicated to defy rational analysis, and there are those who believe they are manipulated much as expensive drug trials might be.

Of course, whatever Repatha's faults in efficacy, it suffers from the back-breaking burden of witheringly high cost. For us cholesterol skeptics ("deniers"?), this is surely a good thing.

Here is an article on a financial website called Seeking Alpha from a retired cardiologist-turned-financial-analyst. He is careful with his words but seems sympathetic to the cholesterol hypothesis in general and Repatha in particular. Some of the many comments to the article are not so kind.

Unfortunately, you need to register with the website to read the full article. Fortunately, registration is free.

There is also this Forbes article. The handful of comments include a distinct critic of the cholesterol-lowering craze, and the author himself refers to bearing "torcetrapib scars" (the author worked for Pfizer). Might make interesting light reading.

I understand Amgen paid about $500M for the FOURIER study. Between that and whatever Amgen paid to develop the drug and get it approved, we must be very much in Pfizer territory a la torcetrapib in terms of losses. And people wonder by pharmaceuticals are soooooooooo expensive.

Bob, I don't follow the markets at all, I guess it shows!!

My biggest worry is that one day a lipid lowering drug will be developed which will have some off target beneficial effect which will be mis-applied to the cholesterol lowering effect. Personally, I doubt this ever happened with the statins and the minuscule benefits they show are 100% due to funding sources combined with torturing the data.

"Bob, I don't follow the markets at all, I guess it shows!!"

You'd be surprised. That pretty graph you put up made you look a lot smarter than you claim to be. I think a lot of smart people write for Seeking Alpha, but charts and graphs provide a sheen of expertise that may or may not exist.

"My biggest worry is that one day a lipid lowering drug will be developed which will have some off target beneficial effect which will be mis-applied to the cholesterol lowering effect".

I thought this was what the "pleiotropic-benefits-of-statins" controversy was all about!

I think if an independent group replicated any of the statin studies the pleiotropic benefits would evaporate. de Longeril summed it up nicely, there are no pleiotropic beneficial effects. There is no controversy.

What is the magic about this number?

Eric, this number probably reflects power calculations to pick up a p less than 0.05 for a conglomerate of soft end points while keeping p greater than 0.05 for hard end points like the body counts.

Peter, thanks for the link. The de Lorgeril paper is quite a read. I can forget how to spell "pleiotropic" now.

I thought it slightly amusing that de Lorgeril is associated with Joseph Fourier University, and the subject of your post is the FOURIER study. So, for grins and giggles I Googled lorgeril fourier, and the first hit was:

I don't speak French, but I got the idea.

For soft end points I suspect the ultra low LDL might influence a lot of decision making as to who gets a stent etc so FOURIER may well be measuring the biases of cardiologists rather than the actual need for interventions......

Bob, hate to nitpick, but that headline is Latin, not French.

Latin, French, it's all Greek to me. Actually, I should have known when Google did a lousy job translating the headline from French. It works much better from Latin.

Along those lines, Googling Was Fourier study a flop brings up a 2016 link about Apo-A1 Milano.

Well, both Latin and French to be pedantic. If it was Latin it would probably be "Exultate jubilate: Fourier floppissimus est."

Nice motto, must get it embroidered on my blazer pocket, over my heart.

This article reports that Amgen is financially guaranteeing Repatha.

"...significantly there was no impact on mortality or unstable angina.

This was the first time that a trial has shown a clear cardio benefit from PCSK9 inhibition."

If I didn't read Peter and some other folks (Eades, for example), I would be very confused.