When I started reading about insulin-induced insulin resistance I began with this paper:

It's a nice paper. They took NOD mice which had developed their NOD mouse version of T1DM and either treated them with insulin detemir, or didn't. They had a third group which never developed T1DM so were never treated and these served as a control group.

The treated diabetic NOD mice were gradually stabilised over a two week period then kept normoglycaemic for a further two days. They were assessed for insulin sensitivity using an insulin tolerance test, where a dose of neutral insulin is injected then you track what happens to the blood glucose concentration. The more insulin sensitive the animal, the more the glucose level drops: 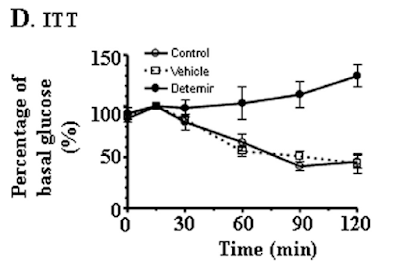 It's pretty obvious that the detemir treated mice (top line) have absolutely no response to neutral insulin and that both non-treated diabetic mice and never-diabetic mice drop their blood glucose levels by about 50% on this particular dose of neutral insulin.

I could stop this post here. Exogenous insulin induces insulin resistance in T1DM mice, as it does in people. This is fact.

But of course you should not just accept this. The question is: Why?

Recall that the hyperglycaemia in T1DM has little to do with the lack of insulin per se. The hyperglycaemia is caused by an excess of glucagon from the alpha cells of the pancreas. Insulin starts its control of hyperglycaemia by the suppression of pancreatic glucagon secretion, it's a local action within the islets. How high this concentration of insulin is under normal physiological conditions is quite hard to determine but it is likely to be a lot higher than the diluted insulin concentration in the portal vein, heading towards the liver.

The diluted insulin within the portal vein arrives at the liver where its next job is to suppress hepatic glucose output, again in antagonism to glucagon.

Finally, if glucose from the liver continues to enter the systemic circulation, the function of insulin here is to push that glucose in to any cells that will take it. Muscle and adipose tissue being two major targets.

So under normal physiology there is a gradient of insulin concentrations from very high within the Islets of Langerhans, to significantly lower at the hepatocytes, down to much lower in the systemic circulation.

Exogenous insulin produces no such gradient. It drains from its injection site into the systemic veins and is then redistributed, at a single concentration, throughout the body.

This will never effectively suppress alpha cell glucagon secretion and will only do a modestly effective job of suppressing hepatic glucose output. So glucose will be continuously secreted in to the systemic circulation. The dose of detemir used has to be enough to mop up this excess glucose supply, and it can only put it in to cells sensitive to insulin throughout the body. Muscle cells. Adipocytes.

Now look at it from recipient cell's point of view. Glucagon is high, hepatic glucose output is high and this continuous supply of glucose is being allowed in to systemic cells by the exogenous insulin. To these cells the glucose supply looks like a meal being digested (high glucose, high insulin). The cells rapidly realise that they have enough calories (High NADH levels, high mitochondrial delta psi, reduced electron transport chain). They don't want any more. Their solution: insulin-induced insulin resistance (ie reverse electron transport to generate H2O2 at complex I and so inactivate insulin signalling).

So the very effective control of blood glucose in these NOD mice is at the cost of continuous exposure to supraphysiological insulin levels coupled with a supraphysiological glucose supply, because the systemic cells are "covering for" the failure to replicate the normal gradient from islet to liver to systemic circulation.

Exogenous insulin can never be physiological.

Aside: Except, of course, under deeply ketogenic eating where only minimal insulin is ever secreted, very little is metabolised, the gradients between alpha cells, hepatocytes and adipocytes flattens out and the correct physiology is for glucagon to be elevated with minimal insulin. I've posted this before. T1DM patients have no choice, ketosis is the only physiological state which can be fairly well mimicked using very low doses of exogenous insulin. End aside.

I would never suggest that exogenous insulin has no effect on pancreatic glucagon secretion or elicits no suppression of hepatic glucose output. It will always have some effect, but there will always be an abnormal emphasis of its effect on systemic tissues.

This is the situation in NOD mice and T1DM people. They become insulin resistant by simply using exogenous insulin to ensure normoglycaemia.

I guess the next question, which was asked by the same group whose paper we've just been looking at, is whether simply injecting exogenous insulin in to normal mice induces insulin resistance. That's the next paper, in the next post.

Spoiler: Of course it does.

Peter, this is interesting. I'm a type 2 in a clinical study of a basal insulin. I report my fasting levels and they tell me what insulin dose to take. Three times, when they said take 2 more units, the next day my fastings were significantly lower, but then they went up again. So the last time they said to increase the insulin, I said no, and later I decreased it and fastings are fine.

The only explanations I could come up with was that the extra insulin was triggering an immune response against the insulin or the insulin was causing insulin resistance.

This makes me think the second explanation is more likely. Maybe it's my rodentlike genes.

Hi Gretchen, interesting. Anything as simply reversible as responding to a drop in insulin dose strikes me as being Somogyi related. BTW, reading the fine print of the next paper it seems the effect is hepatic rather than peripheral, ah well. Still reading...

Another BTW, Dr Bernstein does not accept the Smogoyi effect, he thinks people simply over correct for a hypo. This is not the case in canine patients where the effect is dramatic and not necessarily associated even with a hypo, let alone an over administered self-correction, which these dogs don't do (obviously, being dogs!).

Hi Peter. The effect was responding to an *increase* in insulin, not a drop, and BG went *down,* not up as it would with Somogyi. I don't think I have Somogyi, if it exists, as I used a CGM for many months and BG stayed level all night.

Dogs are pretty smart. Maybe they were getting up at night and injecting themselves while laughing. That's the Emoji effect.

Yes, dogs are probably self injecting glucagon! I was thinking of Somogyi as, after the initial drop, the BG went back up. In dogs with Somogyi it appears to take a few days from the injected dose increasing to the hyperglycaemic effect kicking in. No idea if blood glucose falls in those first couple of days, probably does...

I don't think Somogyi explains it because BG simply went back to where it had been, 95 or so. I'm seeing an endo on Wednesday and I'll ask him.

Interesting. Thought I had a good idea about T1 but wasn't aware of glucagon. Would you believe that the English wikipedia article makes only very passing reference to glucagon and some in other languages not at all?

So cells are living as if the patiend lived in a candy store and kept the sugar coming, even if insulin and BG are carefully controlled. Isn't it surprising that overall life expectancy is not that much lower and cancers are "only" 20% up?

This might also imply that ketogenic eating and IF have a smaller effect than we believe.

Roger Unger has a good handle on glucagon. He has lectures on Youtube but for hard copy this review is quite nice

Eventually even pretty poor diabetes protocols do suppress glucagon. It's just a messy way of adjusting to hyperglucagonaemia. LC and keto approaches live with the hyperglucagonaemia as this is utterly normal under ketogenic eating. Or when not eating at all.

I well recall the post linking to Dr Unger's youtube lecture. But, if the insulin hit on the pancreatic beta cells is so strong, how does protein or an insulinogenic amino acid manage to trigger a glucagon release? It seems like the insulin effect would overwhelm the glucagon effect.

Bob, I see an insulin receptor on the alpha cells suppressing tonic output of glucagon. I see a separate receptor for an insulinogenic amino acid triggering glucagon exocytosis. I've not even considered whether there might be two pools of glucagon... Or how the summation of signals might decide on exocytosis or not, or even whether Ca2+ ions are involved.... Or whether either receptor is saturatable... Lots of scope to speculate!