OK. There is absolutely nothing technically incorrect with the description of the results contained within the title of this paper:

They gave a small dose of insulin (low enough to not need rescue glucose within the study period) as a single bolus, waited for 20 minutes then offered the subjects an eat-as-much-as you-like buffet. This is what the glucose levels did 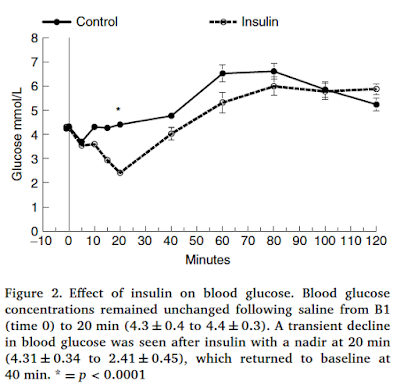 and this is the subsequent food intake in kcal: 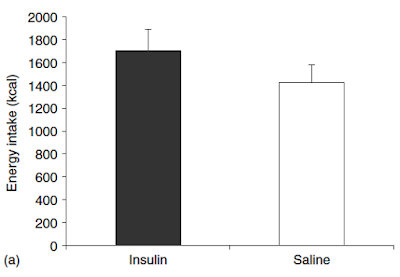 That will be 1700kcal after an hypoglycaemic glucose of 2.0mmol/l or 1400kcal after a blood glucose of 4.5mmol/l. Glucose drop and kcal increase are both p less than 0.05.

Next is this one, not quite so good because the title omits the word "insulin", but never mind.

Here they infused insulin to a glucose nadir of 2.2mmol/l, stopped the insulin infusion and then infused glucose to normalise blood glucose concentration within 30 minutes. On one occasion the nadir was induced at the start of REM sleep (as early as possible in the night) and on another occasion it was induced about 3.5 hours later. Total sleep time was about six and a half hours on each occasion. At feeding time all of the subjects were normoglycaemic. The white column is the control, the hatched is from when the hypo was about six hours before feeding and black is from when the hypo was about three hours before feeding. 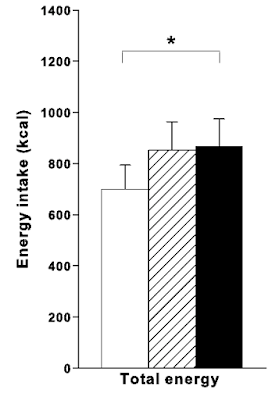 The conclusion is that an hypo soon before you eat makes you hungry (p less than 0.05). An hypo just after you have fallen asleep the evening before might do as well but the p value is ns for this test. In general we can say any hypo leaves you hungry.

Hallschmid (second paper) is a dynamo of publications showing central insulin (via the intranasal route) is an appetite suppressor. You've noticed that this second paper did not have a group given insulin combined with intravenous glucose to protect against hypoglycaemia, isolating the effect of the insulin alone. But then we all know what that would have shown.

Let's look at this from the real world point of view, which is: The function of insulin is the inhibition of lipolysis.

What happened to FFA levels in either study? We'll never know.

Many years ago I posted on a Spanish study cited by Dr Davis. It has all of the pictures you might need embedded in the post. From this we can say that spiking your insulin by eating a small (40 gram) high carbohydrate snack will produce a rise in insulin from 50picomol/l (normal fasting) to around 70picomol/l (a little bit higher but not much, full post-prandial insulin would be at least several hundred picomol/l) at one hour, with return to 50picomol/l by two hours. Despite this tiny rise in insulin the FFAs drop from over 400micromol/l to 100micromol/l at two hours (by which time insulin has actually normalised) with persistence of some degree of hypolipidaemia for up to another three more hours. This is a tiny increment of insulin compared to the above studies.

We know that hypoglycaemia without hyperinsulinaemia does not drive appetite. My hypothesis is that it's the insulin itself which drives a fall in FFAs, which in turn drives the hunger to rise, all secondary to insulin's anti-lipolytic effect. Note, there is no need for any direct appetite modulation from insulin to explain these results.

So: you eat a Mars Bar at 15.30, just before evening consults ('cos you had a long theatre list, you had no lunch and there was nothing else to eat. Looong time ago, but I can still remember those days). By 17.30 you are ravenous and a bit shaky. Ha! Reactive hypoglycaemia! Oh, but your BG is 4.5mmol/l. Huh?

Labels: Insulin makes you hungry (3) a matter of semantics and free fatty acids

But...a Mars a day helps you work, rest and play.

And, no doubt, keeps the doctor away.

I remember the limited edition dark chocolate with white filling Marsbars. Oh, and getting home at 5pm, utterly unable to wait for food while I cooked supper. So filling in with a banana sandwich, on wholemeal bread of course, with peanut butter replacing the dairy butter (too much saturated fat...). Been there, done that, no thanks.

When it comes to hunger I would imagine that ghrelin, leptin, Oleoylethanolamide and other eCBs would play larger roles than insulin would.

You might find this interesting. FFAs decrease circulating ghrelin in humans. Appears to be full text. No direct mention/testing of hunger, though.

Unknown, yes, there will be layers of signalling. Just insulin isn't one of them. What is really interesting is the use of reactive oxygen species in the control of hunger. Then you are getting down to a level which interests me...

Thanks Chris, I have to say the insulin believers don't have any simple way to explain why fat should stop you feeling hungry. Again I'd be interested at the ETC level. You would probably find that ROS are involved in ghrelin secretion. I would predict that saturated fat does the job better than the PUFA in intralipid.