Insulin makes you hungry (5) except when you resist

TLDR: The function of insulin is the inhibition of lipolysis. Does resisting insulin facilitate lipolysis?

This the next paper:

Improving Influence of Insulin on Cognitive Functions in Humans

Aside: Oooooh, look. No control group! How can I already tell they are going to find that insulin suppresses appetite? End aside, sniggering excepted.

The only parts I am interested in are the clamps and the appetite scores (no food intakes in this one). 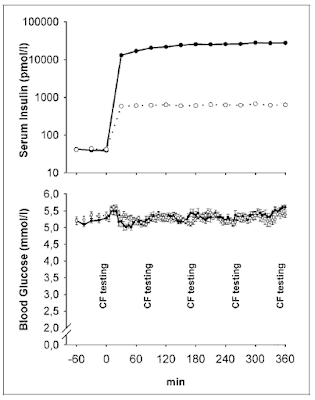 These are the hunger ratings during the clamps: 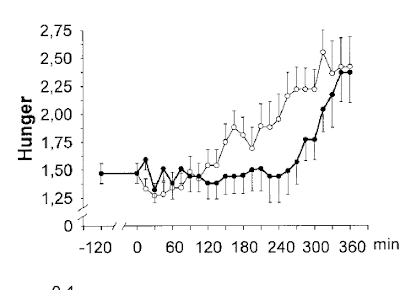 So anyway, there we have it. Insulin, entering the brain by the physiological route, suppresses appetite  in real live humans with a dose response. Time to shut up shop and go back to kayaking in my free time.

But just one moment. I think it might be worth looking at this study in the units of insulin concentration that we are most used to working with. I used this website to do the conversions.

We have here a fasting insulin somewhere around 40-50pmol/l. In old money that is 6.0microU/ml, quite reasonable.

The low clamp is around 900pmol/l, just over 130microU/ml. This is pretty well "normal" for physiological post prandial insulin after eating a meal of junk.

The "high" insulin clamp is around 30,000pmol/l (it's a log scale) by the six hour mark. I'll try to be careful with decimal points here, but I think this equates to just over 4000microU/ml. I'm not sure that even an insulinoma patient would run an insulin of 4000microU/ml. If anyone thinks this sort of insulin level has anything to do with appetite control in the physiology of humans, then they may be mistaken. But this level of insulin exposure does delay the onset of hunger, by over two hours in this study...

Now, here is a sideways way of looking at CNS insulin.

If the physiological role of insulin in the VMH is to augment fat storage, what might be the effect of CNS insulin resistance? Go on. I dare you to say that the effect might be partial failure to suppress lipolysis, less suppression of FFAs and so reduced appetite augmentation. Resisting insulin allows you to resist its hunger generating effects. How's that for a bizarre idea? Feel free to point out faults in the logic.

I've long been interested in the concept that exposure to insulin itself induces insulin resistance. There are a whole slew of papers to suggest this, some better than others. Overall I find the concept quite convincing.

If we want to actually see insulin resistance kick in rapidly, and measure it, we have to go to cell culture. Here we can overdose by decent amounts, using nanomoles rather than picomoles, and watch the reduction in signalling triggered by these high insulin concentrations. Insulin receptor (IR) phosphorylation drops within 45 minutes from the initial peak at 10 minutes after exposure. It's in this paper if anyone is interested in the details

but this is a typical graph:

If we convert the nanomolar concnetration from cell culture to the picomoles of in-vivo clamps then the two higher concentrations used in this graph would be 17,000pmol and 170,000pmol, similar to those from the high dose clamp used in the human study. Especially when you consider that 17,000pmol and 170,000pmol have indistinguishable effects on IR phosphorylation (and acute generation of resistance to that phosphorylation effect) in cell culture.

So it seems quite feasible to me that a physiological clamp at 900pmol/l would produce normal "insulin hunger" due to lipolysis suppression and that a clamp at 30,000pmol/l would induce significant insulin resistance. That limitation on insulin signalling would obtund the normal inhibition of lipolysis (but not eliminate it entirely) and so defer the normal onset of hunger routinely induced by the physiological action of insulin. So very large doses of insulin (170,000pmol in cell culture imitating 30,000pmol/l as a clamp) should postpone the onset of hunger compared to mildly supra-physiological doses (5000pmol in culture imitating 900pmol/l as a clamp) because the higher doses should cause less inhibition of lipolysis, with the proviso that you choose your target concentration very carefully. Obviously no one does a study without a pilot trial to make sure they will get the results they want. A saline infusion produces no significant increase in hunger over 150 minutes, though the trend in hunger is upwards because supper was a long time ago by the end of that particular study!

I'll take a pause here because I think this current concept is quite controversial enough to be stated as simply as possible. Obviously there are more studies which we can look at to explore the usefulness of this idea.

Labels: Insulin makes you hungry (5) except when you resist

peko, thanks. From the abstract "Section V reviews work linking the bioactive lipids diacylglycerol, ceramide, and acylcarnitine to insulin resistance". This is my in-progress current post. One or two more on the stupidity of insulin as a satiety hormone are waiting to be posted first.