Insulin makes you hungry (6) except when you snort it

TLDR: The action of insulin is the inhibition of lipolysis.

This is our next paper:

Sniffing neuropeptides: a transnasal approach to the human brain

This is from 2002. Intranasal insulin does interesting things. I just wanted to run through the initial results following a single dose of 40iu of intranasal insulin and a subsequent (successful!) weight loss study based on this dose. These are the levels of insulin in cerebrospinal fluid (CSF) of volunteers as measured by sampling through a spinal catheter placed at the L4-L5 level (ouch!) and also in plasma after that single 40iu intranasal dose. It strikes me that the the insulin concentration in the rostral CNS might be a bit higher than down at L4 but I guess no one would volunteer for cisternal punctures/catheter placement to check this:

CSF insulin hits 25pmol/l. There is no penetration in to the systemic circulation. My feeling is that a rise from a basal CSF insulin of 7.0pmol/l to a peak of 25pmol/l, ie just over a tripling of fasting levels, probably reflects what might well be a physiological post-prandial concentration change within the brain. Roughly.

Note that intranasal insulin enters the brain at a clearly detectable concentration within ten minutes.

Then we have this study, also based around that 40iu intra-nasal dose:

A set of subjects, all male (perhaps the word "man" in the title should read "men". I'll give you one guess as to whether this trick for weight loss works in women. Or in insulin resistant "man/men" either), took 40iu of intranasal insulin, four times daily, for eight weeks. This will have been on top of their normal pancreatic responses to food over this period. Or they took placebo. This is what happened: 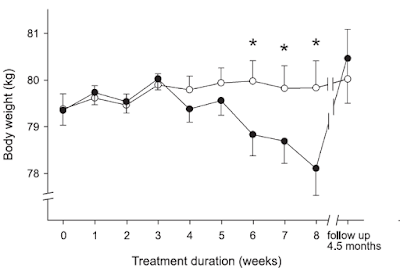 Recall that intranasal insulin enters the brain within ten minutes...

Anyway. For three weeks, that's 84 doses of 40iu intranasal insulin, there is zero weight loss. Nil. Zilch. Nadder. If anything there is a minuscule trend upwards. And I mean minuscule.

Then by week four something marvellous happens and consistent weight loss ensues.

So the question is: How many 40iu intranasal doses of insulin does it take to induced VMH insulin resistance in young healthy men? Sadly the answer is not 42, this is merely the answer to Life, the Universe and Everything. It's actually twice that, 84.

It seems that it takes more like 84 CNS over-exposures to insulin to obtund its lipolysis inhibiting effect normally induced via the VMH. At this point nutrients are less effectively sequestered in to adipocytes and so become more available for metabolism, obtunding hunger and allowing weight loss.

If anyone has a better explanation for the shape of the weight loss graph I'd be interested to hear it. The authors don't.

Labels: Insulin makes you hungry (6) except when you snort it

The body seems to be able to ignore short-term perterbations,
but when they become chronic, it takes steps to restore what it thinks is the correct levels.

Very much enjoyed your previous two posts Peter.
It makes sense extreme hyperinsulinemia can induce IR, i have read studies of insulinoma pts confirming they do become IR (although, of a different etiology of conventional metabolic origin) so it stands to reason doses higher than this would accomplish it more quickly.

http://diabetes.diabetesjournals.org/content/53/11/3024.short
As you probably know intranasal insulin does not work in women for weight loss, and the likely reason is hormonal differences like estrogen that promote insulin sensitivity.

Would be interesting to compare menopausal women to similarly aged men.
https://academic.oup.com/jcem/article-abstract/95/12/E468/2835414
This study found menopausal women responded the same as young women however, so it does not appear to be an acute hormone difference.

http://diabetes.diabetesjournals.org/content/early/2012/02/16/db11-1390.short
This study from 2012 found intranasal insulin at 160iu reduced appetite in women in the postprandial period, but did not have an effect fasting. The blood glucose declined slightly, which i suspect is a marker for CNS IRs inhibiting lipolysis (thus decline of glucose).

I'm thinking part of women's resistance to intranasal insulin working is the fact females have much lower rates of lipolysis and fat metabolism as compared to males (which informs observations like, women being fasting intolerant, and more sensitive to hypoglycemia). My guess is any benefit of insulin is mitigated through the antilipolytic effects of CNS, which is likely greater in women than men. So, results like this: it doesn't work fasting, but some benefit if paired with meals only.

https://www.karger.com/Article/Abstract/197974 Rodents, but insulin infusion in the brain suppresses hepatic glucose release; i see no reason why this wouldn't also work in people.


My perspective is, it is reasonable insulin has *some* anoretic properties (being a postprandial hormone) but the profile is likely mixed and concentration/context dependent. Of course it goes without saying, insulin in the CNS is not the same condition as very high insulin in the brain and body as well (we know how that works out, morbid obesity with insulinoma pts; bariatric surgery pts discovered to have insulinoma on the table even reported)

I wonder if the time of year and change in environmental conditions are relevant here, via melanopsin and alpha - MSH pathways.

As we enter the winter months insulin sensitivity decreases:

In winter there is a reduction in alpha - MSH

This in turn leads to increased CNS insulin resistance.

I would love to hear your thoughts on Satchin Panda’s research on time-restricted feeding and how it fits into the mitochondria/fat metabolism framework you’ve described.

If you have the time and it interests you, of course.

Thank you for this blog!!!

This really belongs in the protons thread but since it hasn't been updated in a while I thought I'd put it here. I've been wondering if you have an opinion on this paper:

Could this be physiologically relevant? In Chris MasterJohn's recent podcast:

He claims that vitamin k2 - mk-10 and mk-11, in humans, tend to localize in mitochondrial membranes and that pork is a huge source of mk-10 and mk-11.

It occurs to me that if this is an active system in humans this would have major effects on the Protons theory of insulin sensitivity. Does k2 mk-10 from pork create a shuttle directly from Complex II to Complex III without going through Q? What would this mean for RET?!

Yes, that’s another potential explanation. I’d got some of the studies you cite set up for the next post but I’m now going round and round working at the concept that insulin might be an anorectic hormone. Certainly in healthy blokes intranasal insulin does suppress appetite in the immediate aftermath, though of course there is no weight loss because it simultaneously accentuates fat storage. My problem is in conceiving that anything in obesity research might be correct. That’s a hard one to swallow but I’m working on it…

Rob, I’ve just started looking around this area. Obviously satiety will turn out to be a ROS mediated phenomenon. Which CNS neurons are set of to respond will determine which are important. But I’ve only just peeked at ROS post prandially in the brain so no real handle on it yet.

Chris, Interesting. I notice that they used sucrose based diets as “High fat”. You just have to wonder what a ketogenic diet would have done without all those tedious hours without food………

Bradley, I’d look at it more from the VitC point of view. Insulin secretion is ROS driven in the beta cells. Look what ascorbate does to this:

Obviously in 1994 no one was considering the generation of ROS as essential for insulin secretion. Underneath all of the Ca++ and ion channel effects there will be ROS. Or no ROS if you short out the RET using a bypass of the CoQ couple…