Here is a little more from this paper:

This is insulin signalling under massively supra-physiological insulin exposure in cell culture: 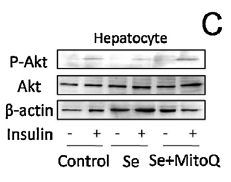 This is, obviously, their best gel, that's the one you publish. The insulin resistance (fainter P-Akt band) when insulin and Se are both used compared to insulin w/o Se exposure does appear to be there. At physiological levels of insulin this differential seems likely to be maintained.

This implies blunting of insulin signalling, which allows more FFA oxidation, which generates greater levels of ROS than would occur under continued insulin action. These ROS would be physiological on a ketogenic diet or under extended fasting but are not so in cells under culture using 11mmol glucose (which is what I think is in the medium they used, they don't actually say) plus whatever insulin is present in 10% FBS. So we have this:

Control is from cells under RPMI 1640 alone, traditionally 11mmol/l glucose. Excess selenium blunts insulin signalling so allows FFA release from intracellular triglyceride stores, so increases ROS (in the same way as metformin does but w/o the suppression of gluconeogenesis intrinsic to metformin's action). Adding rotenone, as you would expect, blocks RET so blocks ROS generation. CCCP uncouples respiration, drops delta psi so blocks RET/ROS. Etomoxir blocks access of FFAs to mitochondria so blocks input at mtETFdh, so blocks RET/ROS. MitoQ powerfully targets all mitochondrial ROS so over-rides the FFA oxidation ROS generation effect. Chromium picolinate restores insulin signalling by repleting the Cr depletion induced by Se. MSA is an inhibitor of glutathione peroxidase, so it eliminates the effects of excess GPX. And SS, sodium salicylate, appears to block intracellular lipolysis in hepatocytes, so suppresses fatty acid supply to mitochondria, much as insulin or etomoxir would.

All a very plausible narrative.

Except for oligomycin. What does anyone expect the blockade of ATP synthase to do to ROS generation, throughout the electron transport chain? It is going to increase delta psi, reduce all of the redox complexes and generate a ton of RET and ROS through complex I and probably at ton at complex III too. It is specifically used to generate ROS in many other studies, example here:

The specificity of neuroprotection by antioxidants

I'm not very comfortable with oligomycin as a suppressor of FFA oxidation induced ROS. It is another, rather serious, blight on the paper. It certainly should have been discussed.

I would usually ignore the whole paper except Tom Naughton gave us all the heads up on a recent report of a chap taking what might have been a hefty dose of green tea extract who went in to liver failure. Obviously most folks just excrete antioxidants like GTE with little harm done. I just wonder if he got unlucky or took a huge dose while walking round with the sort of liver full of lipid so beloved of Public Health England. Losing the protection of insulin's inhibition of lipolysis simply dumped a ton of unregulated intra-hepatocyte FFAs from lipid droplets on to his mitochondria, which then popped their clogs.

Who knows? It's another nice narrative. I just wish I wasn't so suspicious of the selenium paper...

Both reports also play rather too well to my biases against antioxidants, but that's how it is...

Treacherous things these vegetables. I used to think there couldn't be any harm in zucchinis and cucumbers but now I am quite apprehensive. Add green tea to the list, it is full of fluoride anyway, and that green matcha tea powder commonly used as a flavour and colourant. It's healthy dontchanow. Yeah right.

When I was younger these things were ubiquitous https://en.m.wikipedia.org/wiki/Selenium_rectifier --- I still have some in a cupboard somewhere and I have dismantled them at times. Not milligrams but grams of the stuff. It used to be used in laser printer and photocopier photocylinders too maybe still is. I'm not sure which smells worse, selenium or arsenic but you can smell the selenium even in the 100 microgram supplements and it probably accounts for the weird aroma of Brazil nuts.

Can you parse this paper:

Hi Pass, more of a low voltage/current diode person myself in the 1970s. And tunnel diodes too. All of the resistors and capacitors came out of discarded TVs, back when they had individual components. Became quite adept at un-soldering components. OMG, we used to extract transformers too and use 1.5 volt batteries to shock our "friends". Had forgotten that! It was never very popular with the recipient.

bill, mast cells are intrinsically associated with adipose tissue. It's not unheard of to find a mast cell tumour within a lipoma...

I have this paper lying around on my hard drive https://www.ncbi.nlm.nih.gov/pubmed/22069285 which suggest that blocking the action of histamine limits weight gain (it's a crap paper), almost the opposite of the idea floated by the paper you cite.

So, theoretically, antihistamines blunt ketosis while augmenting fat loss/limiting weight gain. That's an interesting (and somewhat improbable) story.......... But I can quite believe there is cross talk using histamine.

An amusing paper. Not been through it in detail but I gather fat produces a sh!tload of dopamine and opioid receptor activation. Unless you have too much of it. I love also the bizarre concept that too much fat in the food is unpalatable, presumably while getting you high on dopamine and opioid activation. Maybe it just stops you feeling hungry. No, surely that is too unpalatable an idea, as the truth often is!

Hi Peter, what would be the reason for your bias against antioxidants? Cheers, Alex.

Hi Alex, superoxide is one of the most important signalling molecules in your body. On a par with nitric oxide. And people want to screw this up? As I said, we have a liver to get rid of antioxidants asap. Just occasionally it fails.

There's another factor at play here - Se is a Sulphur analogue, and at toxic levels of selenium selenocysteine is taken up during protein synthesis in place of cysteine. This results in the formation of Se-Se bonds which are weaker than S-S bonds (hence selenium toxicity weakens hair and nails). And if we look at the structure of insulin, several S-S bonds are an unusual feature of the molecule and play a mechanistic role in the regulation of synthesis (they only form in extracellular medium, being kept reduced as -SH -SH within the beta cell). So the insulin "resistance" could be the weaker effect of an imperfect analogue of insulin. Maybe.

So I guess that Arsenic might behave in a similar fashion wrt P as Se does to S not that you'd want too much of the wrong type of P. So many nasties! Tellurium, mercury not to mention thallium, the poisoner's favourite. Selenium and mercury have a tangled relationship, biologically. George, paradoxically there is a commercial anti-dandruff shampoo which reeks of selenium 'Selsun'. Thank goodness it is only topical and poorly absorbed.