Here is the basic Mrp antiporter structure as suggested in

Quite how many protons are exchanged for how many Na+ is uncertain but there are papers using modern Mrp set in proton tight membranes that suggest it might be more than one H+ in per one Na+ out. ie Mrp is electrogenic, or rather it consumes pH gradient to extrude Na+. This would be no problem in the hydrothermal vent scenario, protons being freely available there. Personally I'd like electroneutrality but that's just my biases as to how P furiosus works. Anyway, Mrp is much like this, with uncertainty about the numbers of ions: 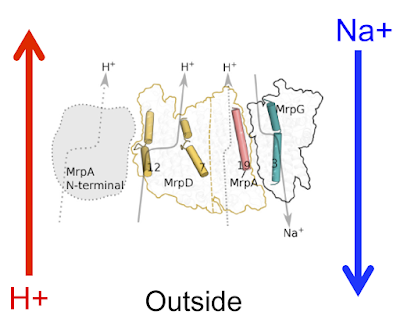 Here is exactly the same antiporter but broken down in to the main channels: 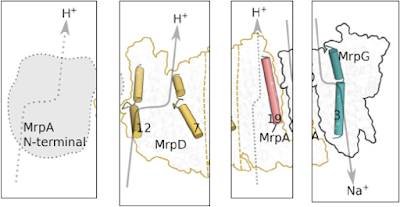 If we ignore the arrows for the H+ in the diagram all we have to do is remove the bulk of MrpA (the N-terminal) and replace it with a power source "pushing" in from the left and we have the membrane bound hydrogenase of P furiosus, still retaining the MrpG Na+ channel and working as a Na+ pump: 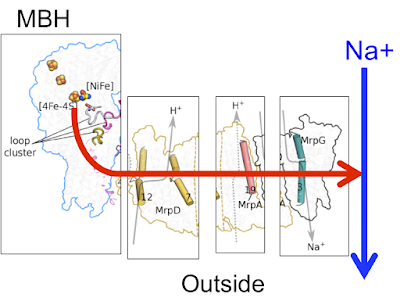 The paper then goes on to talk about Complex I and how that, in the Mrp nomenclature, the combined MrpD plus the fused-on C-terminal of MrpA are flipped around. I spent a long time mentally lining up various channels in my head until I twigged the simplest way to look at it was to keep Mrp channels unchanged but look at the NADH dehydrogenase of complex I as simply pumping in to a completely un-flipped Mrp but being bolted on to the opposite end, in the place of the MrpG Na+ channel. Leaving the N-terminal of MrpA still in place, like this: 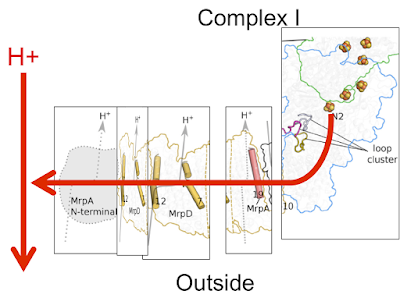 I've squeezed in an extra MrpD because that's what complex I appears to have done as a modified duplication of either MrpA or MrpD. In mammalian mitochondrial nomenclature the MrpA N-terminal derivative is NuoL, the narrowed (only in this image, not really) MrpD gives NuoM and the full sized MrpD is NuoN. Yu et al only use the bacterial  complex I terminology based around the Nqo numbers. I've avoided these numbers (just used the Mrp terminology throughout the doodles) as the switches from terminology to terminology did my head in (as we say here in Norfolk) for weeks. MBH, Mrp and Nqo. Alphabet soup for the subunits!

But the core insight for me was that if you supply power from the left you pump Na+. Supply it from the right and you pump protons. This looks very much like motorising Mrp from one end makes it work in the Na+ extrusion antiport mode. Adding the power source to the opposite end, coincidentally removing the Na+ channel at the same time, drives the antiporter in the H+ expulsion direction, reversing the primordial function of Mrp and so forming the origin of the complex I family.

Obviously there is nothing primordial about complex I. It is reliant on a proton tight membrane and the ability to extract large amounts of energy from NADH, which usually means the presence of molecular oxygen. The least altered representative of antiquity is undoubtedly the MBH of P furiosus and even more so is the ancestor of the Mrp antiporter family.

Peter, isn't electroneutrality always acheived by balancing flows of electrons? It all has to add up somehow and while you have all those + currents flowing about isn't it the electrons themselves as they move between various excited states that give rise to the bulk of the 'chemistry'? Charge can camouflage the energy flows I think.

For example: if p.f. is sucking in more protons than it is losing Na+ and no other + ions are complicating the picture it must be building a strong appetite for electrons. It is becoming acidic I suppose which may be appropriate in a low pH environment (it balances) and perhaps it is becoming a competetive oxidiser of other exterior substrates?

I have to admit, I don't really have a chemistry brain!

Pass, N thermophilus is precisely using proton influx to acidify its cytoplasm in the face of a pH 10 environment. Quite why it does it with antiporters when it could just pump protons inwards currently bends my brain. The next post is about N thermophilus and fig 6 in https://www.ncbi.nlm.nih.gov/pmc/articles/PMC2764116/ almost doesn't make sense, except the priority must be to limit Na+ accumulation intracellularly, using a Na+ and H+ ATP ejecting rotary ATPase. ATP is from SL phosphorylation. Everything else is extruding Na+ using the H+ gradient plus more than eight antiporters. But the H+ gradient is being maintained in a sea of NaOH....

More philosophically, life is imbalance. A dissipative structure. Either from the original proton gradient through to inserting a molecule of chlorophyll between a photon from the sun and the surface of the Earth. Giving Life, which eventually completes the journey to the Earth having lived transiently.