So this is the predicted structure of  the modern MrpA-like functional antiporter from N thermophilus, nt-Nha: 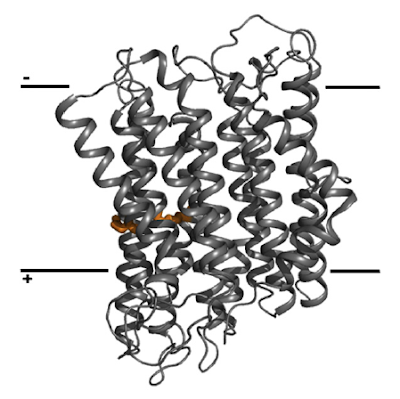 As you can see it is a double channel and it is homologous to NouL from mammalian (and others) complex I. The two marked amino acids are a glutamic acid and a lysine which are conserved in NuoL. I would guess that the left hand channel is the proton channel and the right hand one is for the antiported Na+ ion. In the modern bacterium N thermophilus this antiporter is electrogenic, ie it moves more than one H+ inwards for each Na+ outwards. This may or may not have been the case in LUCA.

So nt-Nha looks a lot like NuoL and so quite like NuoM and NuoN (and MrpA, MrpD and MbhH) but it is the only one to antiport. The antiport mechanism really hasn't been worked out yet.

I guess the next thing to look at is from the same paper. This time we're looking at NuoH, the anchor point at the base of all complex I family of proton pumps. Here it is as a model with NuoH in gold superimposed over the "left hand" channel of NuoL in grey: 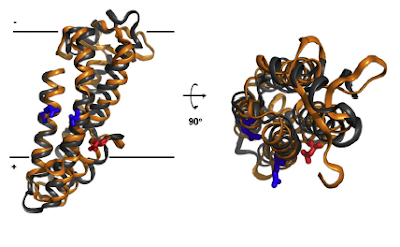 Half of NuoL is structurally pretty well identical to NuoH.

From the proto-Ech posts I consider NuoH to be derived from the primordial channel designed to allow oceanic pH penetration in towards the NiFe catalytic site (at alkaline hydrothermal vent pH) to generate reduced ferredoxin as the core power molecule of early LUCA, able to reduce CO2 to CO at the CODH/ACS complex.

So a derivative of the ancestral proton channel formed half of NuoL. I think it is very likely that this is the case for all of the "antiporter-like" subcomplexes, though clearly some changes in function have occurred. What made up the other channel of the ancestral antiporter? For a clue as to this one we have to change subunit and change nomenclature. The work has not been done for NuoL but it has been done for the membrane bound hydrogenase of P furiosus (subunit MbhH) which is structurally more closely related to NuoN rather than NuoL.

Let's switch papers and go back to

Here we are viewing subunit MbhH, remember that we think that the left hand channel is probably derived from the ancestor of NuoH: 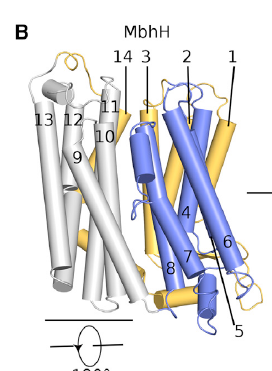 Now, here's the clever bit. If we draw a horizontal line across the left hand channel, say just below the "9", we can rotate the channel around this line so all of the labels 9, 10, 11, 12 and 13 end up on the bottom far side of the model. With this done the two channels are superimposable, rather neatly: 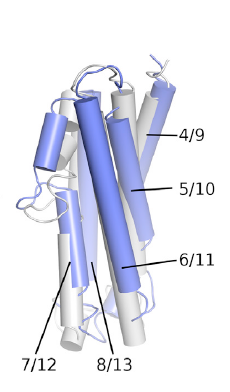 So the right hand side of MbhH is simply the inverse of the left hand side.

We only need one protein, the original ancestral proton channel, to make both sides of the original ancestral antiporter. Minor modification would allow one side for H+ and the other for Na+. Then some sort of coupling to convert H+ in to drive Na+ out. But basically we can make all of the modern "antiporter-like" subunits from an ancestral derivative of two conjoined NuoH-like channels.

That is so neat it has to be correct. So it's probably wrong!

That coupling process might be extractable from work being done with modern complex I but I have only skim read the paper so far, so I'm not sure how much further I can progress the current fairy tale.