This is a quite fascinating paper from Iran. Bear in mind that none of the authors appears to be a native english speaker and that they could really have done with some editorial assistance, but the results seem quite significant to me. Seyfried gets a thank you for input to the study design but clearly was not an author.

They recruited patients who were deemed to need chemotherapy before breast cancer surgery. Half got chemo alone and the other half got chemo plus 12 weeks on a calorie restricted, MCT based ketogenic diet. They all went to surgery and were followed up post-op for about 30 months.

As far as I can make out 30 people in each group completed the intervention. Each of the cross ticks ("censored") are patients lost to follow up in some way, around 10 in each group. 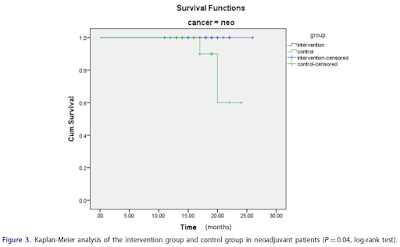 It looks very much like none of the available for follow up patients in the intervention group died. Forty percent (about ten people?) died in the control group, p=0.04.

This is from a 12 week ketogenic pre-surgery intervention. If a drug had produced this effect it would be a blockbuster. There was no instruction to stay ketogenic after the 12 week trial period finished, though there are hints that at least some of the women did.

Interesting, to say the least.

Much the same effect as fasting.

FBG down only 15% on keto? Something doesn't add up.

This is a mildly propinquitous opportunity for me to ask esteemed Hyperlipid readers what they think about this:

It never before occurred to me to wonder why heart cancer is not a Thing.

(That author could also have use some editorial assistance, mostly with autocorrect typos.)

in order for an organ to get cancer, it needs to grow, repair and produce new cells. Without growth, there is little potential for mutations of any kind and their accumulation.

Heart cells form only once and do not re-grow when damaged. They die and are not being replaced. Thus, there is little chance for mutations.

Heart tumors do occur, but it is (as I recall) an inborn matter.

The 112 was also after 3 days of high fat, high calorie due to testing Dave Feldman's cholesterol drop protocol (which worked for me exactly as he says it works, though I got that odd high morning fasting blood sugar). Or maybe it's easier to see if I put it only about 12 hours fasting and morning values:

For me, not really any change in morning fasting blood sugar, though what happens is my blood sugar rises until around noon, then falls all day long until about midnight. I learned this by using a FreeStyle Libre continuous glucose monitor for over a year.

Now, I don't have true "before" readings, but not everyone's blood sugar falls into low morning values. The only time I see less than 100 in the morning, for instance, is if I fast multiple days.

On two sequential days last week I woke up with a FBG of 4.7mmol/l one day and of 3.4mmol/l the next. No obvious diet or exercise linkage...

Yes, pretty good, but they missed stearic acid as a source of ROS. Our friend superoxide...