The sweet taste of DMEM

I mentioned in the last post that few papers ever specify the glucose concentration used for cell culture. This came up in comments from Alex and I think it deserves a mention in a post of its own.

The standard methods description for almost all cell culture usually specifies that DMEM was used, along with assorted ancillary chemicals and a source of growth factors, usually foetal bovine serum, but rarely the glucose concentration.

A brief trip to any commercial supplier's website gives you approximately 50 DMEM formulations. Three or four have zero glucose and are intended to allow you to specify your own glucose concentration. Another five or six use the original 1g/l of glucose giving 5mmol/l, ie a physiological glucose concentration. This is described as "low glucose".

I've never done cell culture but I gather the normal technique is to use 25mmol/l medium, let the cells use the glucose to grow and when the glucose drops toward 10mmol/l then they are re-fed with new medium at 25mmol/l of glucose. This works. For decades.

It also provides you with enormous information about the behaviour of cells under hyperglycaemic conditions.

Obviously, 25mmol/l of glucose in an intact human is pure pathology but it is well tolerated by the cells in culture because there is no other caloric source which inputs as FADH2. No free fatty acids.

At the most basic level a glucose concentration of 25mmol/l should a) never occur at all and b) if it does occur it should promptly trigger, via insulin acting on adipocytes, a fall in FFAs to 100 micromol/l or less.

This graph is from a paper on pancreatic beta cell death. From the open circles it is clear that, with glucose held at physiological concentration of 5mmol/l (G5), palmitate is harmless at up to at least 400micromol/l. 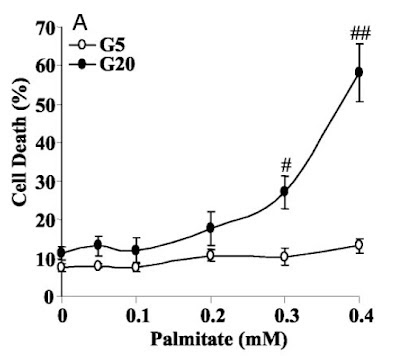 This should surprise no one because a 60 hour fast in a healthy human will provide 2000micromol/l of mixed free fatty acids with a glucose of just under 5mmol/l. And no multiple organ failure.

Compare that with the closed circles where glucose is pathologically high at 20mmol/l. Physiological fasting levels of FFAs then unmask the gross pathology of glucose at 20mmol/l. Typical of ordinary cell culture concentration.

Given the idiotic stand of the cardiologist community against saturated fat and given the apparent safety of pathologically elevated glucose in fat-free or PUFA supplemented cell culture medium it should come as no surprise that very few labs worry about the consequences of their grossly non-physiological DMEM.

Demonstrating the pathology of hyperglycaemia using (and blaming) saturated fatty acids or the converse lack of acute toxicity from PUFA (low FADH2 input) is a route to funding which would surely discourage any questioning of the techniques of cell culture which have been successfully used for decades. As folks say:

"We've always done it that way".


That's all I really wanted to say but here are a couple of odds and ends:

There are groups for whom glucose matters. Even if stuck in the incorrect complex I inhibition paradigm for metformin's action, the concentration of glucose is recognised as important by some.

have developed a system for glucose homeostasis in cell culture 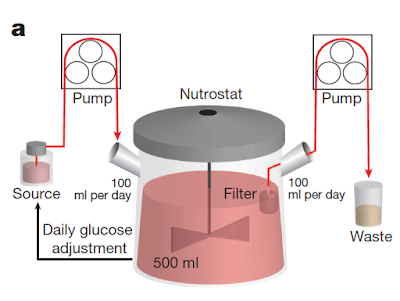 Their approach is pretty well unique. It is NOT how cell culture is normally done.


The other brief aside while I'm on cell culture from an outsider viewpoint is FBS, foetal bovine serum. This contains essential growth factors. You can pretty well translate it as "insulin" or "IGF-1".

When cell culture shows that metformin works to reduce cancer cell growth, it is working in the presence of insulin signalling (usually combined with hyperglycaemia). Which metformin blocks at the glycerophosphate shuttle level, without the need for a lethal blockade of complex I.

Labels: The sweet taste of DMEM

If you point this out it disrupts the popular narrative.

My hunch - (and I don't want to start an ungrounded narrative myself - hunch level) is the cancer connection is due to cancer cells having dysfunctional mitochondria - thus relying on glycosis - and if BG is high enough - the cancer can out grow the immune system.

If the MT were functioning properly - the immune system could trigger apoptosis.


Could the difference between CLA and LA be connected to apoptosis?

Last author is Vessby, amusingly booted of the Swedish equivalent of PHE for conflict of interest due to being owned by the food industry. Probably provides correct facts with wrong interpretation.