The miracle of safflower oil (2)

Just a brief mention of this one:

Use of dietary linoleic acid for secondary prevention of coronary heart disease and death: evaluation of recovered data from the Sydney Diet Heart Study and updated meta-analysis

merely because they used the same miraculous safflower oil as featured in the last post. This was a secondary prevention trial and increased safflower oil derived linoleic acid to around 15% of calories, again with no attempt to remove the ubiquitous industrial trans fatty acids from the control diet.

Here is the all cause mortality over 5 years 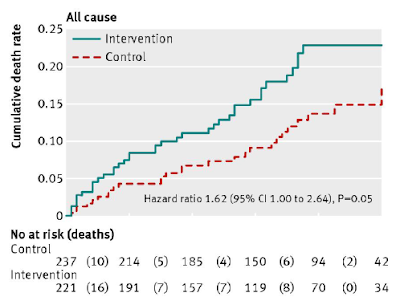 It's interesting that the increased death rate kicked in almost immediately, ie there is a case to be made for direct toxicity rather than the rather abstract concept of accelerated ageing that I've speculated about previously.

Ramsden published these recovered data in 2013. I guess seven years might be a little too soon for it to have filtered down to the World Health Organisation or Public Health England.

Talk about blood on their hands.

Labels: The miracle of safflower oil (2)

Thanks Peter, that looks blatantly true. I certainly don't need convincing but wish the message was more widespread.

There is the Veerman article
https://www.bmj.com/content/353/bmj.i1512

It has been sunny here so I haven't concerned myself with vit D but today is overcast and while I was reading your piece I reached for the D pills. I have the common oily capsule type. It ocurred to me to read what oil is in these things. I had my suspicions but could not find the information anywhere. Each capsule weighs approx 440mg and contains 25ug of cholecalciferol, I assume it is vegan friendly oil so a cheap vegetal type thus the field narrows. Assuming the worst if you took a half dozen of these pills a day you'd get up to 2.5g of pufa. That might be enough to completely negate any benefit of the tiny amount of vit D contained, more so if one were following the low fat/ low sat/fat diet and perhaps this is why vitD trials are sometimes inconclusive. Context is everything!

Two eggs contain about 80% of the rda of D however there is that recent discussion about the linoleic content of eggs. Sardines look promising but not those in oil. What to do? My usual approach with unavoidable pufa is to swamp everything in butter or dripping to dilute the problem. Sunlamps in moderation might be safer for those who eat low pufa/wheat/veg/carb and those who do not burn easily. Not so for the others!

Pass, I get half of my genes from western Ukraine and these seem to predominate over the Scottish derived ones as far as sun sensitivity goes. A few days in the sun and I go brown, don't burn and am left wondering how much vitD I can make through that brown skin... My wife burns in March but, last time she had it checked, is normal for VitD on blood test. No supplements.

There are canned sardines in olive oil. The (seasonal) Lidl product tastes better than the fancy virgin olive oil variety from the organic food store. Portugal is a great place for gourmet sardines and other fatty fish in olive oil.

Dear Pass et all
Let me share my recipe of detoxing...you can view seed oils as package wrap -transportation protection only.

Take dried tomatoes e.g. with sunflower oil.
Pour the oil on your bike chain or motorsaw chain. Or sink, while it is so healthy it does not clog the sewer, cmpr arteries.
Replace with olive oil, the remaining omega6 is close to essential need. Or e.g. with 3% Salt water, and the remaining oil starts floating for easy removal. Vinegar solution as well...

Since seed oil soaked products are cheaper, this may save some money as well.
JR

The vitamin D drops I get are in olive oil...that to me tastes like olive oil (it's peppery). You might consider getting them with K2 also.

The sardines I have are in olive oil, or at least are marked as such. The fishy taste overwhelms any other taste, so it's hard to know the actual oil.

If anyone is near a Costco and you actually like olive oil, Costco sells one from California that is a mix of 4 different types of olives. It's in a jar where they specifically discuss the olives. It's great. Grassy, peppery, etc. I've cut down on olive oil (switched to butter), but still like it on the few times I eat it.

As for sun, I'm 50% Italian, and maybe 25% Polish. I don't get a great blood value for vitamin D unless I take it. I try to get sun during the "summer", but it's rare to get a weekend and sun. I do find that almost 6.5 years of low carb/keto means I can go out in the sun for a long time without burning. I will peel, though, if I get too much sun too quickly. I can never get a base tan...

I suspect caffeine might do the same! Assuming it is a metabolic effect...