I picked this paper up from George Henderson via twitter

Effects of dietary fat on gut microbiota and faecal metabolites, and their relationship with cardiometabolic risk factors: a 6-month randomised controlled-feeding trial

which is part of the same study as this one

The study is amazing. The researchers provided all of the food to all of the participants for six months. The only fat source was soybean oil. It could almost be a rodent study. This is what the study says:

Just a few things to point out: The diets were isocaloric. No one was allowed to select their calorie intake. Blokes got just over 2000kcal/day, women got 1700kcal/day. Some supplementary fruit was allowed, to be recorded as and when eaten.

Here are the baseline diets for each of the intervention groups:

Particularly note the exact match of calories normally eaten at baseline compared with that supplied by the study intervention, which was utterly accurately measured out in the study kitchen.

What happened to the weights during the intervention? This did: 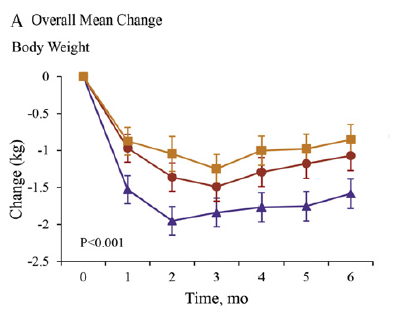 The first thing to say is that all participants lost weight. I guess that has something deep to say about the accuracy of three day dietary records!

However the weight loss was far from uniform and was clearly inversely related to the level of PUFA in the diet. Less PUFA, greater weight loss, 2kg in eight weeks for the lowest PUFA group. This cannot be explained by reduced food intake because all food calories were provided, in exact amounts, by the study kitchens. Diets were isocaloric...

Protons would suggest that the higher the PUFA content the more dietary fat was "lost" in to adipocytes then not subsequently released. From the cico-tard point of view just over a kilo of fat was "not released" from adipocytes over eight weeks of weight loss in the high PUFA vs the low PUFA group. That's 1000g over 56 days or just under 20g/day. This would have to be countered by a decrease in metabolic rate, in NEAT or specific activity. Or more cheating, recorded or not recorded. The study authors assure us there was no cheating.

After eight to 12 weeks all subjects started to regain weight. The regain slope suggests about a kilo per year on a rigidly fixed calorie, weight reducing food intake.

These people were 23 years old and weighed 60kg. If they stuck with this diet over 30 years they might end up at 90kg. Of course this wouldn't happen if they really stuck with the diet. As weight gain tried to continued on a fixed calorie intake, hunger would increase.

You cannot argue with hunger for 30 years. The subjects would break the diet and eat more. This manifest lack of "willpower" or gross "gluttony" would take the blame for the increased weight gain, which would be blamed on the increased calorie intake.

But the weight regain was already there on a rigidly fixed calorie intake. A calorie intake which gave eight weeks of initial weight loss. This still gave a progressive weight gain with no declared increase in caloric intake.

The beauty of PUFA and the Protons concept.

NB It is difficult to emphasise how good this study is. Just ignore anything the authors have to say.
Posted by Peter at Tuesday, April 28, 2020

Labels: The miracle of safflower oil (4) Soybean oil is just as good

There's something to be said for authoritarian regimes ;)

Probably the trains run on time too (assuming they are running again)...

Awe-ful in both senses of the word

That really is a great study. It's too bad they didn't have one more arm (or drop the middle one and replace it) -- a high saturated fat arm.

It's also too bad that anyone not knowing your theory and reading this study might conclude that "higher fat = more weight (re)gained". Technically true, but this ignores the type of fat.

Could not use a SFA arm because everyone knows that it’s bad for you.

Blows Hall's artfull writhings right out of the water, no?

Pass, feeding a strictly controlled, accidentally hypocaloric diet for a few days in a metabolic chamber never gets near to the water, so blowing it out there-of is a pretty pointless exercise to attempt. If Hall had any chance of telling us anything useful about obesity he would hardly need to have attacked Ludwig's group so appallingly and incorrectly. One thinks of root vegetables.

I wasn't thinking of it as seaworthy. More like a decoy duck.

Unrelated, but you're going to love this! Statins change production of thousands of proteins in muscle cells, which shows how they cause muscle pain and myopathy. Effects can be partically negated by adding PUFA...

It's amazing what we can do as a species and how we have absolutely no idea what to do with the data!!!!

Let's assume the core problem is that we deplete to total amount of CoQ present in a myocyte. So almost any electron input to the few remaining molecules of CoQ will fully reduce the CoQ couple and generate ROS. We can side step this debacle by reducing the input through ETFdh by oxidising PUFA with double bonds which do not generate the ETF to input at ETFdh, so less ROS, so less damage, so less need for a genetic response to acute cellular poisoning. I wonder if the expressome tells them that.

I also wonder if they have ever heard of the Sydney Diet Heart Study and how many people might die as a result of them not reading it?

I can't imagine why the word "hubris" keeps occurring to me…

Peter I'm really enjoying your current burst of essays. Slightly off topic but not quite there is another bizarre aspect of pufa such as oleate and linoleate worth mentioning.

Raising a garden where I live is firstly a struggle against feral animals like rabbits, native possums and cockatoos, and when you manage to keep those at bay there are plagues of insects to deal with such as earwigs which devastate green shoots, flower buds and fruit. They love garden mulch where they can nest and breed up into their thousands. One way to get rid of them is by brushing a bit of linseed oil onto sheets of newspaper and rolling those up into tubes tied with a rubber band, leaving them in the garden overnight and collecting them into a rubbish bag every morning when they will be full of earwigs.

Linoleic acid is an insect death scent. The earwigs are omnivorous predators and it lures them in. Linoleic acid is literally the smell of death, more delicious than putrescine or cadaverine to a predatory insect. If you have ever cooked anything in linseed oil you will probably agree, mucho stench.

It isn't specific to earwigs and their prey, it is a widespread and ancient occurence:

"Recognizing and avoiding the dead could reduce the chances of catching the disease, or allow you to get away with just enough exposure to activate your immunity," says Rollo. Likewise, he adds, release of fatty acids from dismembered body parts could provide a strong warning that a nasty predator was nearby.

"As explained in our study, fatty acids—oleic or linoleic acids—are reliably and quickly released from the cells following death. Evolution appears to have favoured such clues because they were reliably associated with demise, and avoiding contagion and predation are rather critical to survival."

"The ants were most attracted to the scent of linoleic acid, a fatty acid that's known as a necromone among biologists because it acts as a "death signal" for bugs."

So, there's another collective noun for the fans of heart healthy vegetable oils: Necromoniacs.

BTW - I have never seen as many cockroaches as when I helped a friend strip out an old takeaway shop ie all the fast fried food furniture, cupboards and cookers, congealed oil and cockys everywhere, cockroach paradise ... people eat this stuff.

If you ever needed any evidence that the bright red devils are in charge of the food chain, there it is.