Well, I got that wrong about conjugated linoleic acid (CLA) from mongongo nuts.

The !Kung people eat their mongongo nuts and the large amount of alpha-eleostearic acid converts to 9cis, 11trans CLA:

This 9c, 11t CLA is exactly the same isomer as rumenic acid, the primary CLA of ruminant meat/dairy fats.
It's not a lipolytic agent. Not from monongo nuts, not from ruminants.
For lipolysis you want 10trans, 12cis CLA.
Manufacturing a bulk supply of CLA for marketing as a fat loss drug uses a process of treating ordinary linoleic acid with a catalytic industrial process which isomerises the LA in to roughly a 50:50 mix of 9c, 11t CLA and 10t, 12c CLA plus some odds and sods
The 10t, 12c isomer is a lipolytic agent of some potency. There's a nice review here:
Adipocyte response to conjugated linoleic acid

However it does not appear to be found as a normal component of any biological system as far as I know, though I'm open to someone finding a source. At the moment it looks like it is a drug, manufactured from linoleic acid by an industrial process. The chemical formula might be identical to rumenic acid but on a "shape", charge distribution and metabolism basis (the location and orientation of the double bonds really matters to enzymes) the two have nothing what so ever in common.
In addition to weight loss 10t, 12c CLA can also trigger adipocyte apoptosis. A little apoptosis might be fine if you have adipose tissue hyperplasia (too many adipocytes, rather than too distended adipocytes) but if you have normal levels of overly large adipocytes it will place the burden of accepting excess insulin mediated lipid for storage in to the remaining, already overly large, adipocytes. Or your liver.
This is essentially a lipodystrophy, certainly if taken far enough. As in congenital and acquired lipodystrophies, this will be associated with glucose intolerance, insulin resistance and functional type 2 diabetes. In rodent models you can drive this process somewhat further than you can in human clinical trials. So this study uses mice:

Bear in mind this is a model and has been set up to produce an extreme black/white result and it delivers.
Oral glucose tolerance test and intraperitoneal insulin tolerance tests: 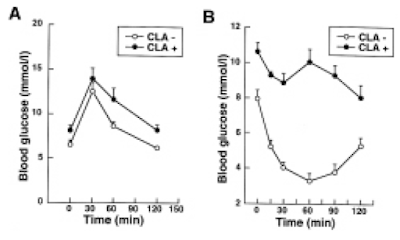 Here are the weights of various organs of interest (check the liver): 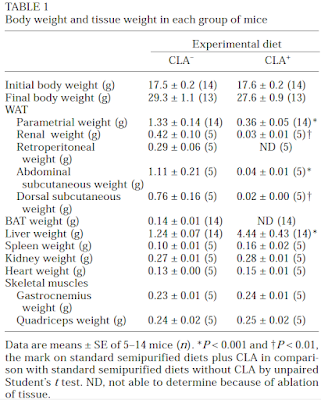 Note that the model was set up so there was no weight loss with the 10t, 12c CLA treated group. There is massive adipose tissue loss, adipocyte number loss but no weight loss (it's a model, people are clever). All of the lipid which should be in adipocytes ends up in the liver. What does a 4.44g liver look like in an adipocyte depleted mouse? Like this: 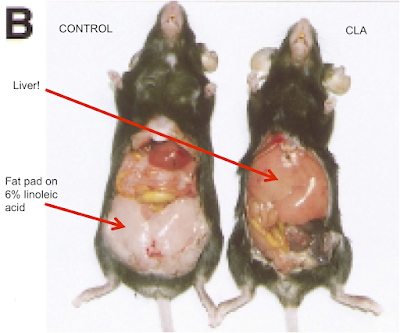 This is the diet:

That's a quarter of 11% of calories as mixed isomer CLA, the sort you might take as a supplement, ie around 3% of calories. About a third of this is the active 10t, 12c CLA, ie around one percent of calories.
If a human consumes 2000kcal/d then that's 20kcal or 2g of 10t, 12c CLA per day. In this now rather well thumbed study
Comparison of dietary conjugated linoleic acid with safflower oil on body composition in obese postmenopausal women with type 2 diabetes mellitus

they were using 6.4g/d mixed CLA isomers. That will be around 3g/d 10t, 12c CLA. That's exactly the ball park used to produce lipodystrophy and diabetes in mice. The same phenomenon occurs in pigs where after slaughter back fat can be extracted, weighted and processed to detect apoptosis:

Supplementation with conjugated linoeic acid decreases pig back fat deposition by inducing adipocyte apoptosis
Comparable studies would be difficult in humans but least pigs aren't mice.
Where does this leave the !Kung and their mongongo nuts? Well, they certainly never see any 10t, 12c CLA, our liver only converts alpha-eleostearic acid to rumenic acid (assuming we're like rats). This latter is either a weak or non lipolytic/apoptosis agent. Does that leave the !Kung as inexplicable?
No.
It turns out that alpha-eleostearic acid is a rather potent lipolytic agent in its own right, it also induces apoptosis in fat cells in a similar manner to 10t, 12c CLA. Bitter melon seed oil is another, quite well studied source of alpha-eleostearic acid. This gives the flavour:
Altered White Adipose Tissue Protein Profile in C57BL/6J Mice Displaying Delipidative, Inflammatory, and Browning Characteristics after Bitter Melon Seed Oil Treatment
Mongongo nuts are lipolytic until their alpha-eleostearic acid content is detoxified to rumenic acid. To me, this suggests that living on mongongo nuts may carry weight control benefits at some risk of generating a degree of lipodystrophy, however small. I doubt anyone has gone studying adipocytes from the !Kung for markers of apoptosis. It looks like there will be a trade off between degree of lipolysis, giving small, low basal lipolysis adipocytes vs lost adipocytes giving larger, more basally lipolytic remaining adipocytes. I suspect the dose makes the poison.
I think it's probably unimportant to go in to detail about how alpha-eleostearic acid and 10t, 12c CLA induce lipolysis/apoptosis but, not surprisingly, it involves the generation of ROS for both.
Peter
Posted by Peter at Tuesday, December 07, 2021

Kiss my daily tbsp+ 84% butterfat heavy cream in the coffee.....good bye! In fact eat a lot of dairy....kiss all that good bye.

Hap, if you've finished with the cream could you pass it over here please?


Peter "The chemical formula might be identical to rumenic acid but on a "shape", charge distribution and metabolism basis (the location and orientation of the double bonds really matters to enzymes) the two have nothing what so ever in common."

Since you started this series about M-Nuts and CLA, and various trans fats it reinforces just how specific metabolic processes are versus substrates. A bend in the wrong place or a single hydroxyl where a hydrogen should be and it is like a foreign language where yes means no and the outcomes are radically different perhaps even toxic. As above. It makes me wonder about similar things going on wrt the various carbs. Inulins would be a good example I suppose. We have enzymes to cleave glucose etc from regular starches but no enzymes which can cleave fructose from inulins although we're perfectly capable of processing fructose, so we have to rely on gut bugs to do the digesting for us, at some cost. Why? There's a lot of weirdness to this.


"alpha-eleostearic acid is a rather potent lipolytic agent in its own right, it also induces apoptosis in fat cells in a similar manner to 10t, 12c CLA"

Afaik adipocytes are immortal, once you have 'em you're stuck with 'em except after liposuction, so the ability of these fat/drugs to assassinate them is quite interesting. It could be a useful follow up procedure for that dodgy class of diabetes drugs which cause adipogenesis. (I think that's the right word, I mean an increase in the number of fat cells.) To be investigated: does that leave you in a better place afterwards!??!

Wow, what a post! I had no idea so much was known about these topics.

Thank you, you've made up my mind: I'm not buying my wife CLA. Diabetes is not an acceptable risk for getting rid of that last tiny bit of tummy fat. I'll stick to feeding her beef tallow and cocoa butter.

Hap, dairy has rumenic acid as its main CLA. Papers vary as to whether it has any effect on weight at all so probably there's none. I just found one, tenuous and poorly referenced hint (never got the original source, not on Scihub) that rumenic acid might be mildly anabolic. You know, calf + milk = small cow. So you have to wonder about rumours of dairy and weight gain but I dunno.....

Pass I was thinking it might offset the damage done by taking glitazones. Some degree of adipocyte apoptosis could help. Then use simple trans fats to bump up lipolysis, if you want to go that route. And yes, small changes to a molecule can convert an agonist to an antagonist.

Johnathan, I'd indeed be cautious.

Seems Covid can use fat cells as a reservoir, and fat cells can mount a massive inflammatory reaction.

Now I wish they had looked at the kind of fat stored in those cells.

So, for someone who is post-obese, and who got obese by not only filling up their existing fat cells, but also by creating lots of new ones, CLA might have a use?

I understand that Peter's skepticism of 10trans, 12cis CLA mostly applies to normal to slightly overweight people for whom lipodystrophy would indeed not be a good thing, but, as with most things, there would be certain situations where it would be more on point.

Could post-obesity be one of those situations?

Maybe instead of trying to make a CLA weight loss drug, someone could start importing mongongo nuts?

Tina, yes, especially if you have been glitazone "treated".

Unknown, I think I'd rather just forego the seed oils full stop!

Eric, there's plenty of peripheral evidence that linoleic acid in your fat cells is what's going to kill you. Once it comes out.