Back in the mongongo nuts post I suggested that conjugated linoleic acid (CLA), which shows the hallmarks of a lipolytic agent, derived from the alpha eleostearic acid in the nuts might offset the obesogenic effect of the common or garden linoleic acid (LA) present in roughly equal amounts.
We have the !Kung consuming anything from zero to 1000kcal/d of mongongo nuts per day, average 800kcal/d, ie about 40% of calories:
Mongongo: The ethnography of a major wild food resource
You can download the full text from Scihub. It's a nice read.
So. If this is the case you have a pair of opposing effects, from the Protons point of view the LA is insulin sensitising and will allow excess insulin signalling to distend adipocytes when they should be signalling that they are full. Under fasting it can allow relative hypoglycaemia, encouraging food intake, but that's not a feature of this study. All subjects were only fasted for four hours.
At exactly the same time the alpha eleostearic acid derived CLA will be facilitating the release of FFAs from adipocytes which means that fat cells stay approximately the correct size and those FFAs are available to be perceived by the brainstem. So, from the adipocyte point of view we have excess calories-in and excess calories-out concurrently. If the adipocytes never distend we will never have to deal with size-derived excess basal lipolysis and the associated appropriate insulin resistance.
Now we can look at how that might explain the observation in this paper
Metabolic Responses to Oral Glucose in the Kalahari Bushmen

"Since an overnight fast would probably have been broken (owing to the almost continuous eating pattern of the Bushmen when food is available), we performed tests in the afternoon, after four hours of observed rest and fasting."
The Bushmen eat very frequently when food is available but never enough in total to become obese.
What does an oral glucose tolerance test look like in a !Kung bushman?
Like this:

"Mean glucose levels were higher in the Bushmen at all stages, with significant differences at 0 and 120 minutes. Indeed, by lax criteria of evaluation (Jackson et al., 1970), their mean two-hour post-glucose level of 121 mg/ 100 ml could be regarded as falling within the "diabetic" range. Conversely, the Bushmen exhibited insulinopenia throughout the test, and this was significant at 0 and 60 minutes."
These people are insulin sensitive, as you would expect from a high LA intake. However they don't become obese because they never secrete very much insulin, ignoring the CLA. Does anyone recall this image of an isolated, perfused rat pancreas? 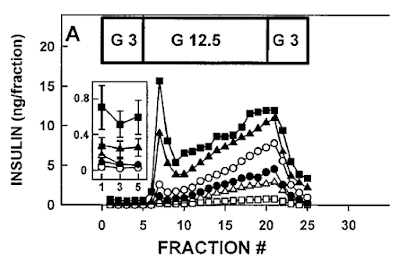 The closed circles are perfusion with LA. So perhaps it's not too surprising that the !Kung are hypoinsulinaemic. And it doesn't matter because they are also very insulin sensitive. This balances out.
In some ways they remind me of Jim Johnson's reduced insulin gene dosed mice in which, during early life, some glucose intolerance was present secondary to hypoinsulinaemia but this self corrected with age. Clearly the !Kung, with normal insulin genetics, are quite capable of becoming obese on an high LA diet simply by ramping up their insulin secretion in response to a mixed diet and it is the CLA which stops this. So they never develop the problems secondary to distended adipocytes.
Other explanations welcome.
What would have been really interesting would have been an insulin tolerance test which looks at insulin sensitivity without needing any confounding contribution from (decreased) pancreatic insulin secretion. I think we can assume that there would have been a profound fall in blood glucose in response to exogenous insulin.
Peter
Posted by Peter at Thursday, November 04, 2021

Hi Peter, some notes if you please.

They grouped together males and females in Bushman group. Mean weigth thus 42kg vs 65kg within skinny whites. A difference of nearly 50%... this must play a role in insulin secretion.

"they live by hunting game and collecting wild vegetation "veldkos""

"the relative carb intolerance of our primitive Bushmen... is rather surpricing."


These reasearchers from Harvard Kalahari project can not stop wondering why humans can't consume glucose-cola ! It is so healthy, ask our prof. These were the heydays of glorious Frederick J Stare, organizor for a hit job of "sugar in the diet of man". Hall of Shame, pole position.

However, how is this connected to FFA's ?
JR

JR, the body size thing is interesting. They were very careful to check growth hormone levels as they felt a “similar phenotype” was present in the Pygmies. They ref to a Pygmie paper, available through Scihub, which doesn’t actually show the same glucose/insulin phenotype!

Off topic, sorry. I don't have access to more than the abstract. Can anyone who does confirm whether it is now true that my beef dripping is going to kill me?

Too soon for Scihub too. I'm well impressed and probably been dead for decades...

There is an issue that came up on my T2D pandemic radar. Apparently sperm counts are seriously down and along with that testosterone levels.

I am troubled by the lack of wider data -

Is this just in the USA or all western countries?
What about T-levels in women?

If T levels are down - I would expect it would result in lower muscle mass and a larger tendency for T2D.. (possible developmental problems that might explain some of the political developments?)

I know that lack of physical activity - weight bearing exercise is correlated with low-T - but not a big effect.

BUT - the papers I'm finding seem particularly poor quality - to the point that I'm not sure this is a real thing or not? I also find it disturbing how many journals are now part of the regulatory capture problem - easy to see with CoVid papers.. no attempt to show good science - just political obedience.

There is a long list of possible causes - arrow of causation probelem - missing T-level data. So I'm wondering if anyone here has gone down this rabbit hole? Is this for real? Are T-levels down?

@Numbbum
Your beef dripping was always going to kill you, they are just deciding how.

BTW can no longer get dripping or lard at the supermarket. They're getting us all on to seed oils - speed things along a little.

That's interesting David, beef dripping was out of stock when I put in my last food order... No idea if it's a general UK thing. But then 90% choc was unavailable too but I found plenty on the shelves in the local supermarket.

Here in Australia beef dripping is commonly available in supermarkets, even in small regional towns, alongside with lard and duck fat.

Not sure who are the buyers, thought, all I see is carts full of seed oil and frozen, ready to Fry food.

Anyway, is saturated fat is killing us, at least we will die well satisfied, I just had a fantastic Brahman hump boiled with salsa verde, as marbled as the best wagyu and cheaper than dog mince!

Tucker has a new post up today on linoleic acid. I'm still working my way through it – it's really long and seems exhaustive, in both senses of the word — and it's a really nice break from thinking about viruses.