Many many thanks to Dave and Hege for the text of the paper. What does it say?

OK, they did a single 24h dietary recall and they ain't telling us anything about the results except for diet "type" predominant in each group. So they have discovered the Masai eat low carb high fat, the Bantu subsistence farmers eat high carb, low fat and urban Bantu probably eat junk. I simplify.

They also noticed the Masai walk a long way everyday and the urban Bantu don't. Cracking stuff this.

They took random bloods and found exactly what you would expect, deteriorating lipids from the "excellent" values from the high fat/LC Masai down to the "worst" lipids of the urban Bantu. If you believe the sort of lipids they're measuring are "good" or "bad" per se. They forgot to check HbA1c.

After that it's an ad hoc hypothesis that walking makes a lethal dose of saturated fat give you the "best" lipids in Africa. A bit like saying the French are protected from heart disease by all that red wine they drink.

The job of observational studies is to generate hypothesises. This one generates an ad hoc hypothesis to explain a non existing paradox. The well known effects of high fat low carb diets on blood lipids have been documented in the obesity and diabetes literature so many times now that you wonder why Mbalilaki has not been sacked on publication of this study for ignorance of the current intervention studies. Just pubmed Volek or Westman to catch a few.

How do you sum up this paper? Line one of their introduction:

"Despite overwhelming evidence for a link between intake of saturated fat and coronary heart disease... blah blah blah"

The Norwegian Centre for International University Co-operation and the Swedish Council for Working Life and Social Research funded her jaunt to Africa. I hope she enjoyed it as much as we did our walking safari in Kwazulu Natal in pre Squiggs days.

She wins hands down over Gibney.

This girl will go far.

In the Drankensbergs, nice hill walking. 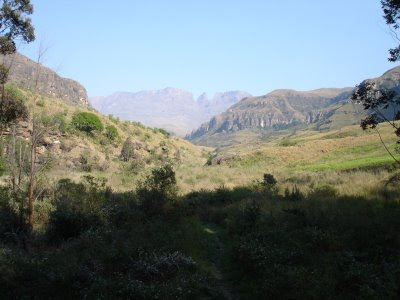 Hi Peter,
Thanks for the amusing analysis of this paper :)

Nice picture btw - I'm from South Africa and we almost always spend our holidays in the Drakensberg. We're not as much into hiking though :D

Now I'm jealous! We got up on the low 'berg. It would be marvellous to get up on the high 'berg....

There is a grain of truth to claims against saturated fat. If you add a lot of saturated fat to a diet high in PUFAs, your risk of cancer would increase. That's the way most folks eat now - the typical Western Diet. If people are eating lots of french fries, doughnuts, potato chips, and nuts/seeds filled with PUFAs, trans fats, or rancid unsaturated fats in general), they won't improve health by adding beef fat and butter. They will improve health if they REPLACE the PUFAs with saturated animal fat and tropical oils, as studies show. (See Colpo's Great Cholesterol Con, Ravnskov's Cholesterol Myths, etc.)

This paper may be apropos:

"Abstract: Diets rich in cholesterol and/or saturated fats (Sat-Fat) have been shown to be detrimental to cognitive performance. Therefore, we fed a high cholesterol (2%) and Sat-Fat (hydrogenated coconut oil, 10%) diet to 16-month old rats for 8 weeks to explore the effects on the working memory performance of middle-aged rats...data suggest that saturated fat, hydrogenated fat and cholesterol can profoundly impair memory and hippocampal morphology."

We only have the abstract but go on, have a go at working out what's going on... If you have the full text you can go the whole hog.

Heehee, perhaps the Masai really have loads of heart disease, they just can't remember because of their Alzheimers! Ditto the Kitavans...

Ah the joys of working at a university... I have the PDF full text of that paper now.

Unfortunately, I am not well equipped to decipher it, safe to say that eating all that transfat can't be a good thing. It's yours for the asking, Peter..

OK, email it over and I'll give it a look and see if what I think's happening is what's happening. Email's on my profile.

"Abstract: Diets rich in cholesterol and/or saturated fats (Sat-Fat) have been shown to be detrimental to cognitive performance."

Bollocks. Only oxidized cholesterol and PUFA oils are found detrimental to health.

"Therefore, we fed a high cholesterol (2%) and Sat-Fat (hydrogenated coconut oil, 10%) diet to 16-month old rats for 8 weeks to explore the effects on the working memory performance of middle-aged rats...data suggest that saturated fat, hydrogenated fat and cholesterol can profoundly impair memory and hippocampal morphology."

What was the source of cholesterol? Fresh eggs or powdered eggs or some purified powder? That's the problem with these studies. They say that a nutrient (like saturated fat) has a certain effect, but they don't test it with Food. Hydrogenated oil is a commodity, not a food. It's edible, but has zero nutrients and loads of contaminants (like nickel).

GK: "Unfortunately, I am not well equipped to decipher it, safe to say that eating all that transfat can't be a good thing."

Some studies use fully hydrogenated coconut oil, which wouldn't contain any trans fat. A fully hydrogenated oil would be 100% saturated fat. In practice, only coconut oil and palm kernel oil are FH, because if other oils are fully hydrogenated, they'd be inedible. I think the problem in the study was the cholesterol which they used - probably oxidized. This effect would not happen if they use non-oxidized cholesterol from Food. Unfortunately, most scientists seem oblivious to the concept that their lab chow does not count as Food.