Guddling in the dark for a respiratory quotient

Here's a paradox: How can two groups of mice, on exactly the same chow, have different 24h averaged RQs, p less than 0.05? 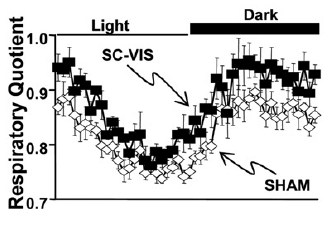 At all time points the SC-VIS mice have an higher RQ, ie are oxidising more glucose, than the SHAM mice. But they are all fed the same chow, which should average out at the same overall RQ.

Clearly you can increase the RQ, even above 1.0, during de novo lipogenesis, especially when hungry mice suddenly eat carbohydrate. But there is either a payback during the sleep phase where RQ falls below the food derived RQ while that carbohydrate-derived fat is oxidised or there can be no fall in that fasting RQ if the DNL generated fat is "lost" in to adipocytes and stays there, ie under weight gain. Of course simply sequestering dietary fat in to adipocytes will generate an RQ more typical of glucose oxidation because less fat is being oxidised, full stop, during weight gain.

During on-going fat loss the extra low RQ from adipose derived fat oxidation does not have to be payed back either. "Food" of very low RQ, has been supplied from adipocytes. It's gone out of the body as CO2 and water.

But the black square mice are weight stable or actually losing adipose weight (ie should have an extra low RQ) at the time these RQs were measured, while the open diamond mice are actively gaining weight (including adipose tissue), so should have that higher RQ.

Food intakes are describes as "no significant difference" between the groups, despite the differential weight shifts.

To me this is inexplicable and should have been discussed in the paper. My feeling is the CLAMS equipment is generating a totally illogical result.

Just on general principles of substrate oxidation, never mind what they have done to the mice.......

Labels: Guddling in the dark

"How can two groups of mice, on exactly the same chow, have different 24h averaged RQs, p less than 0.05?"

I'd look at body temperature differences first. Sometimes it really is just a matter of simple thermodynamics.

They're in a CLAMS machine. No apparent difference. But even so, if they are uncoupling like mad, the RQ should still reflect the substrate which is being "wasted" as heat. There may be less ATP, but surely uncoupled fat oxidation should give an RQ of 0.7 and uncoupled glucose should give 1.0........ Hypothetically?

Guddling is my new favourite word! I had to look that up! As per study: way over my head!

Yes, trying to extract something (trout) by very careful feeling...

Maybe differences in stress response had an effect on RQ that last day. Also we know in terms of weeks what was happening to fat and lean mass, but do we know for that one 24 hour period that RQ is calculated for?

Hi Donny, the CLAMS equipment was used at week 10, from the methods, possibly for just one day if the RQ graph is for a single day. What would happen under a stress response? Increaseed sympathetic tone would raise glucose and FFAs simultaneously but which would be preferentially metabolised? And why might it be different for the operated vs sham mice? Bearing in mind that it is possible that the operated mice have a depot of transplanted fat which is undoubtedly under hormonal control but which may not have a sympathetic nervous innervation. The sham mice don't, all of their adipose tissue is innervated.

I think the generic answer the researchers don't really state is that an insulin sensitive mouse should preferentially metabolise glucose. But if it does that, what happens to the fat from the diet? Especially during weight stability or even fat loss??? Every gram of glucose eaten is always accompanied by the same amount of fat. Store it or oxidise it... That should shift the RQ.

But I'm getting the impression you agree that something is odd and needs some sort of explanation.....

Is the food from a single lot? Unless they analyze what they feed - it can greatly screw up what is supposed to be constant. And the food ages...

I have wondered what we would know if all these studies used chemically defined diets -- Winitiz etc ..

Chemically defined diets can be used on humans as well...

Who knows Karl? That would really defy all interpretation. But the RQs do that anyway....

Interesting article about how easy it is to publish flawed papers and how hard to get them to be corrected:
https://slate.com/technology/2018/03/its-hard-to-criticize-science-without-looking-like-an-obsessive.html

Weight/fat is shown at 4 week periods, though, week ten is smack in the middle. There's a splaying, widening of fat change from week 8 to 12. Can't know what happened in there, that could be a gentle slope down for the transplant group from week 8 to 12. It could be a steeper slope down earlier in that period, followed by some recovery of fat mass farther in. The control mice seem to continue their general trend for the course of the whole 12 weeks, so I guess it is the transplant mice that need explaining.

I guess they didn't want to freak the animals out with a Dexa scan too close to the RQ data...

Back in the 1960's in grade school we learned about the scientific method - that pesky experimental step is supposed to have a single variable. One is supposed to "bend over backwards" to rule out spurious causes - but it isn't what happens. If someone was doing real science - and they were using chow from some place - it becomes important to keep the chow from one batch - freezing it to keep it more constant over time - keeping it mixed so it doesn't settle out only adding one item for the control vs variable.

They don't do this - and often the test and control chow actually come from separate companies..

But it gets worse - Me and my wife have hosted foreign students for more than 30 years now - many doing Phd - or post-doc work - Some are forced to publish BS if they want to get their degree that they have so much invested. I've had students tell me they were forced to remove failed students T-test results - some were forced to NOT publish a much simplified narrative that refuted their advisors work.

In the end, what gets published and left out is about the flow of grant money - ego fueled narratives.

If some problem does not exist - and a students work might prove it is a false crises - for the 'good of the other students' it won't get published - no crises - no money.

If you get into big Pharma, where the results of a paper can mean $B, they employ 'handlers' that "make sure the researchers get what they need" . . . taking people to lunch regularly to keep them spun the 'right way'..

It is getting harder to get funded to do pure research - where there isn't some patent involved - and I remember - it was 1980 when they passed the Bayh–Dole Act which monetized university research..

There are good researchers - humble - some even Aspergerish and not susceptible to the social pressures - some just really want to find the truth - but sadly - not the majority.

Then we have to remember what 'significance' really means - 5% of the results might be spurious.

The good news is that today - the Internet helps correct - point out the junk.

Jim, yes, the 8-12 week period is the interesting one, if you can believe the data. Up until 8 weeks I’d assume that the transplanted fat placed in to the abdomen with some tucked up by the liver, would be draining IL-6 to the liver, certainly for the first six weeks, negating any benefit. Is there then linear metabolic improvement or are there all sorts of ups and downs hidden in the wide intervals? Unfortunately if you can't trust the CLAMS data you can't work out what happened to energy expenditure etc...

karl and Eric, I have to agree in general. More specifically all of these fat transplant papers have multiple flaws, and the authors have some problems too with personality. But, deep down, I think there is something in the data which is interesting if you can just get beyond the flawed methodologies and poor conclusions. I can’t quite leave them alone…

if i was betting money on the answer to your question it'd be on "human error". But that's a boring one...

Off Topic: Peter take a look at Georges new blog post, it is very interesting: http://hopefulgeranium.blogspot.com.au/2018/04/uncoupling-saturated-fatty-acids-and.html

My bet is that some mice had more lab light on than the others. That will change a nocturnal mammals RQ because it alters the heteroplasmy rates at COX.

Don't mind me. Just wanted to sign up for followup comments.