On phosphorylating AKT within visceral fat

I've been thinking quite a lot about the difference between subcutaneous adipocytes and visceral adipocytes. The difference appears to be much deeper than location, though that matters. The next paper is one of those terribly clever research projects where enormous amounts of information is accumulated but little integration or understanding seems to take place. Here it is:

One problem is that they are trying to do too much, so just ignore any of the bits about caloric restriction (CR) which creep in to the butchered graphs. All I'm really interested in is ad-lib (AL in the graphs) fed mice and their adipocytes. I want to know about normal insulin signalling. Here are the fed and fasted insulin levels from those mice. Fed on the left, fasted on the right, part of Table 1:

The dollar signs denote statistical significance (not paydirt). Next are excerpts from Figure 5. I've cropped out the bar graphs showing the pAKT levels from fed and fasted mice. The group is using pAKT as a good marker of insulin signalling. First here's the SC (sWAT) graph: 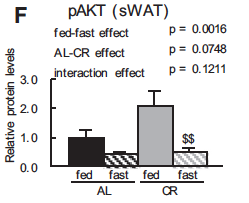 Here is the same graph from a sample of retroperitoneal adipocytes: 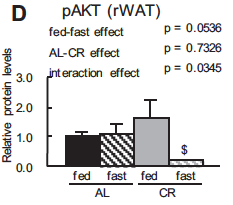 So, theoretically, most of the fat loss under fasting should come from the subcutaneous adipocytes. We need to go back to Table 1 for that: 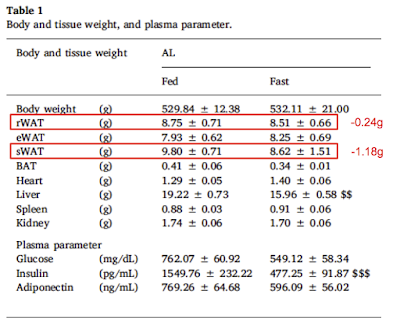 What is it about the visceral adipocytes that programs this?

Perhaps we should look at IGF-1 for the answer to that one.

EDIT We don't know the absolute level of signaling in either the sWAT or rWAT tissue. Fed is taken as reference and fasted is shown as the percentage change from the fasted state. The reference value may differ between the two depots. Just needs bearing in mind. END EDIT
Posted by Peter at Friday, March 02, 2018

Thanks for that analysis.