Preamble: I'm not going to discuss NADPH oxidase 4 or rho zero cells at this stage, not that these are unimportant or boring. For today's post it's just about some of the ROS from mitochondria.

with "Full disclosure: I didn't check the references" added. Which amused me greatly.

So you have to follow references back and back and back to be certain that the absolute fact that "X" causes "Y" is supported by more than someone's ad hoc hypothesis number 3297 as a one line throw away in a textbook from 1952. Or, worse, that they said the exact opposite! It happens.

I've spent an inordinate amount of time going through very old references in the past few weeks. The idea that hydrogen peroxide is an insulin mimetic turns out to be sound. It's not just an insulin mimetic for control of glucose uptake, it appears to be able to replace all of insulin's actions from initiation of signalling through to inhibition of signalling at high dose rates. The exogenous amounts needed in cell culture are compatible with the amounts generated by mitochondrial preparations under plausible conditions, as far as I am able to understand from the methods sections of isolated mitochondria papers. BTW For anyone who owns a MAGA hat you cannot replace parenteral insulin with parenteral hydrogen peroxide for diabetes management, undesirable effects will occur at the whole organism level.

I started out from this 2005 paper

and went back in time to find out if it was true. This next paper is from 1974 when people were using transition metal ions to generate ROS, giving the realisation you could do the same thing with hydrogen peroxide alone, without the copper (or chromium) ion:

This image is the rate of uptake of glucose into adipocytes under the influence of hydrogen peroxide in the culture medium: 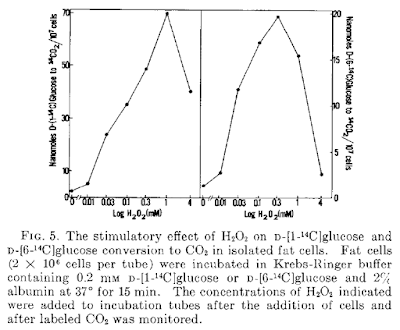 The effect was evident at 10micromol, peaked at 1mmol and was obtunded or eliminated by 4mmol. Bear in mind that these are the concentrations in the medium outside the cell. The concentration in the cytoplasm will be lower and within the mitochondria lower still. Catalase don'tchano. In isolated mitochondrial preps generating ROS in-situ we are talking nanomoles rather than micro or millimoles. But the pattern is there, where small amounts of peroxide get glucose in to adipocytes and larger amounts suppress this.

We can also look at the incorporation of glucose in to lipids and activation of the pyruvate dehydrogenase (PDH) complex using this paper, a jump forward to 1979:

where the pattern is repeated in the activation and deactivation by phosphorylation of the PDH complex at low and high hydrogen peroxide exposure (same pattern is seen for incorporation of glucose in to lipid too, graphs are in the paper): 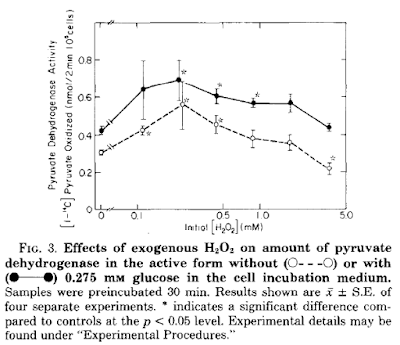 It's worth noting that the effect is present in the absence of glucose but  is enhanced when glucose is present at low levels. High levels of glucose swamp the effect (I didn't follow that particular ref) but I find this plausible because the glycerophosphate shuttle will be better able to generate supplementary ROS given a little glycolysis to work with.

I won't cite any of the many isolated cell culture papers showing that the oxidation of palmitate is good at generating ROS and that linoleic acid is poor at this, I've been through that too many times. They usually use high dose pure palmitate combined with hyperglycaemia and are aghast that cells die under these conditions. Palmitate is the devil incarnate. A deeper view allows more understanding.

"They usually use high dose pure palmitate combined with hyperglycaemia and are aghast that cells die under these conditions."

Does this have any relevance to what happens if we eat gobs of long-chain sat-fat and gobs of sugar (or starch) in the same meal?

I am wondering if there is any relation between this and the old belief that it's healthy to separate one's fat consumption and one's carb consumption into separate meals.

I am also wondering if Brad Marshall's Croissant Diet has any potential pitfalls from mixing stearate and palmitate with megacarbs?

It's more about cell culture. Here you have un-alterable only fully saturated fatty acids in combination with unalterable glucose fixed at 25mmol/l. This never occurs in intact animals outside of advanced T2DM, which is pure pathology. If you eat saturated fat it will (almost) never give unadulterated palmitate (or stearate) in your blood stream, and hyperglycaemia will always spike insulin, which will lower both the glucose and FFAs. In cell culture all substrates stay high in combination with fixed insulin or IGF-1 from the culture medium... An unremitting "hyper-fed" state until cells die.

In intact organisms the ability to deal a mix of fairly saturated fat with starch is normal. If you are not hungry you won't eat. The pathology starts with high intakes if PUFA for eventual metabolic syndrome several steps down the road.

Bear in mind that the macros of the croissant diet are able to control the obesity of leptin receptor deficient rodents. This is a harsh model to succeed in.

Ever since your post about cell culture medium (the Eagle stuff?) I've been very skeptical of anything in vitro having to do with metabolism, and extrapolating that to one's daily habits.

So are you hinting that H2O2 is THE signal?

What happens if we forget about humans for a moment and think of a single cell eukaryote - no insulin system. So as multicellular creatures evolved and needed a high-level control - insulin replaced H2O2? Or does insulin modulate the effect of H2O2?

Try this, it's fun speculation!

Insulin and peroxide are intimately linked. You do need both NOX4 and an electron transfer chain for the signal to work.

Though I guess in the days when there was just an ETC then superoxide would have been a simple stop signal. But there are now layers on layers...

Were I the CEO of AstraZeneca, I'd give all my PhDs 10% paid time off, just to come here and find holes in Peter's theory. Call it "Dobromylskyj time" hehe

Ok hi, can you please translate all of this into lay terms... this article for dummies, is saying that, instead of using insulin to treat diabetes, you can just use hydrogen peroxide? at what percentage? how do you administer it, inject it, drink it?

Sadly I had to include this line in the post:

"BTW For anyone who owns a MAGA hat you cannot replace parenteral insulin with parenteral hydrogen peroxide for diabetes management, undesirable effects will occur at the whole organism level."

As always life is not that simple and intravenous peroxide has been used for certain purposes but not glucose control. In vivo it would have a duration of action measured in seconds.