As so often happens you occasionally stumble over a gem by accident, like this one.

Ignore the TrJ mice, just look at the control mice.

If I told you that the anhydrous butter fat diet was not supplemented with soya bean oil (OMG, these poor mice will develop life threatening PUFA deficiency in the six weeks of the study! Assume a sarcasm apology as being provided) would that make your ears prick up?

So the PUFA content of the Ultra Processed (sarcasm apology repeated) sugar/butter diet turned out to be 3.0% of the lipid calories, which makes PUFA under 1.5% of total calories...

Okay. You don't even need to read the results, you already know what the body weights are going to look like. In case you can't be bothered and would just like some confirmation bias, here they are: 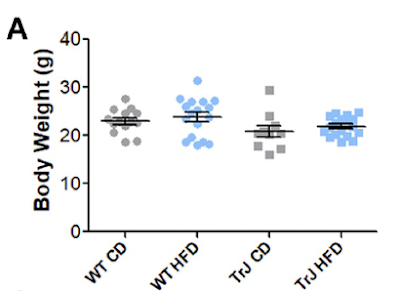 So. When researchers add "x" percent of soya bean oil to anhydrous butter fat diets to "prevent PUFA deficiency" you know that they are doing this, absolutely, because without the PUFA their butter based diets will not produce obesity. They know this, or at least the DIO manufacturers know this.

This insight is very, very important.

Over the years it has become clear to me that there are certain things which "everybody does" which are essential for getting the "desired" result. When Surwit specifies adding a PUFA based oil to an hydrogenated coconut oil based diet it is because he knows that it will NOT be obesogenic without it. He won't know why, but he will know that it is essential.

I think this is a general principle. I especially think it will apply to the intra cerebral injection of insulin behaving as a satiety hormone. There will be something which is routinely done which produces this effect and it won't be the insulin, it will be a "tweak", a normal lab procedure done for some plausibly justifiable reason. That's why it cannot be replicated in the hard nosed commercial lab of company which manufactures the insulin in question and which is looking to market the effect of the insulin, not of some dubious tweak (of which they are unaware).

But it will be there.