The miracle of fish oil (4) Adipocere

I learned a new word yesterday.

Sadly, I find this word very fascinating. Here's why.

This is the first step of beta oxidation of a saturated fatty acid: 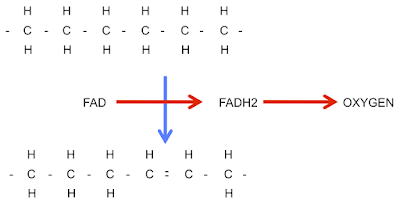 FADH2 derived electrons provide a large amount of energy as pumped protons on their route down the electron transport chain to oxygen. That's a standard part of life for any modern mitochondrion or aerobic bacterium.

But think of the old ways. Imagine you are an anaerobic microbe deep in an anaerobic peat bog in northern Siberia and that you would never even contemplate this new fangled oxygen based metabolism thing. Your core metabolic energy molecule might well be a very negative potential reduced ferredoxin molecule. There might be others but I rather like ferredoxins so I'll go with this one. If you want to do anything with reduced ferredoxin you need an electron acceptor. If you live in said peat bog with a dead mammoth you might just find a fatty acid molecule with a double bond. That's the electron acceptor you've been looking for. Bingo. 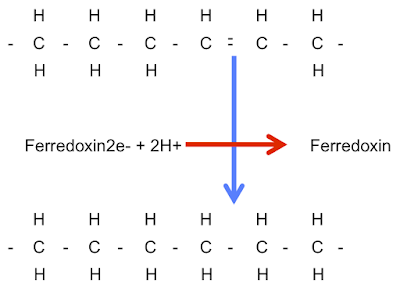 Obviously you can only do this once with each double bond, and sometimes the fatty acid will break at the time of reduction of the double bond giving a pair of shortened molecules. Eventually everything ends up as pretty much a mess of saturated hydrocarbons which is termed "adipocere": fat-wax. A well recognised post mortem change in wet, anaerobic environments.

Which means that if you dig said mammoth out of the bog 40,000 years later you are not going to get a very pretty picture from your HPLC output when you go looking for the PUFA content of the mammoth adipose tissue.

So these guys have a problem:

(Belated HT to Tucker for this paper, got carried away with adipocere!)

They need to reverse engineer the composition of the adipocere to make a best guess as to what was present in the mammoth while it was alive. Also adipocere formation is random. Sometimes a lot, sometimes a little, even within the same carcass. Tough call.

They used a combination of what they thought the mammoth might have eaten, what modern elephants have as their PUFA ratios and the output from the HPLC machine to do the best they could. I do not envy them in this task.

Here is their main results table after the reverse engineering process 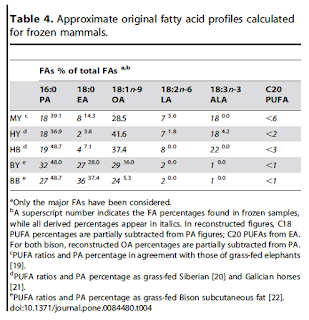 The top line (MY) is the mammoth, the others are horses and bison. The mammoth fat is calculated to have been composed of 7% linoleic acid and 18% alpha linolenic acid before adipocere.

Which looks preposterous to me.

The superscripts to the calculated percentages are the actually measured percentages. That would be 3.6% LA and 0.0% ALA, which were the basis for the modelling.

The superscript c to the MY identifier links to ref 19 which it claims specifies that "grass fed elephants" have similar values for PUFA to the mammoth values presented. Which sounds convincing.

Until you find it is only one elephant.

Who will bet it was a domestic working elephant fed on grains?

Especially because I've read this paper:

All wild animals, culled as part of an elephant management operation.

How do their adipose tissue fatty acids pan out? In the absence of adipocere formation of course. 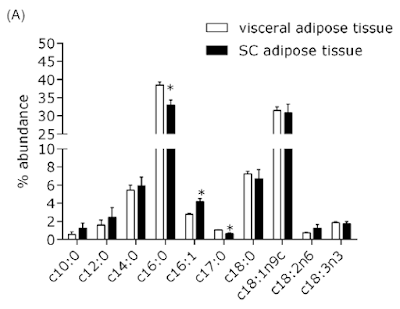 Hi
The very last sentence in the mammoth study: "the woolly mammoth and the horse, might have had a hibernating or semi-hibernating behavior, while their subcutaneous fat could have been consumed by Stone Age hunters to fulfill the daily needs in essential FAs."

I am preparing a list of items, which a man absolutely and essentially needs DAILY. It is a short list so far, oxygen. E.g. vitamin C has stores for ca. 3 months, as former sailors and arctic explorers knew. etc.

Saying something like this of fats, that are needed at 1E% level and poisonous after 4E% levels, does not leave a good impression.

Well, if you just start adipocere formation from ALA at the omega end you would immediately convert ALA to LA. Obviously you would have to stop the process at that point but yes, it is plausible...

What does fish oil have to do with this? Misleading title. Fish oil is a poisonous PUFA. https://raypeat.com/articles/articles/fishoil.shtml

Anti-biohacker, did you miss the sarcasm in the title?

cave, Peatians are always good for a giggle!