This is a paper at the "dislike" end of my bias spectrum:

"Positive energy balance results in greater triglyceride storage in adipose tissue and resultant accumulation of body fat."
which explicitly states that they have the arrow of causation at 180 degrees to the correct direction. So don't expect too much from the paper. I also hate that they omitted to mention in the title that the association with weight gain is negative.
Beyond that the methods are sketchy and the results are limited to a number of model derived correlations subjected, eventually, to multiple unspecified adjustments. So not a lot of hope for the group or for the largely Pima Indian population under their misguided care. But I digress.
Once again adipocyte size is quite tightly correlated with basal lipolysis, like this 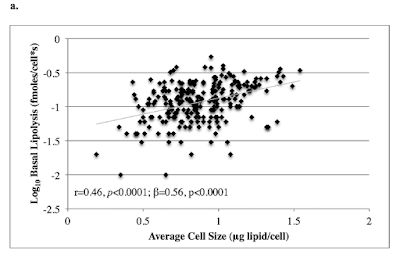 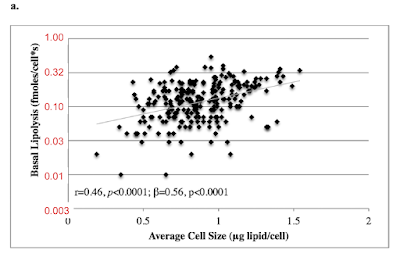 which shows us that basal lipolysis rises progressively sharply with adipocyte size. There is an upper limit to adipocyte size, and this will be set by rising basal lipolysis equaling the obesogenic effect of linoleic acid facilitating the over action of insulin.
They fed the subjects a fixed macro, calorically calculated diet for three days before a day in a metabolic chamber, where they ate three similarly fixed macro/calorie meals.
People turned out to have differing RQs (they use RQ, respiratory quotient, as their term rather than RER, respiratory exchange ratio. My brain works this way too, it's about the only bit of the paper I like, even though RER is probably the correct term) on a fixed macro diet. So clearly something is happening on a fuel partitioning basis.
People who oxidised the most fat in the metabolic chamber were the least likely to gain weight over the following eight or so years. Those oxidising the most carbohydrate were likely to gain the most weight.
Funny that.
I can't see any explanation in the discussion of why that might be.
From the ROS/Protons perspective it is quite clear that people with smaller adipocytes have not finished gaining weight. They are part way to becoming obese because they are consuming LA in combination with an insulogenic diet so are over-storing fat. When they eat a fixed macro/calorie diet they sequester lipid in to adipocytes, fail to retrieve it and run their metabolism on the more accessible carbohydrate. They're probably the most hungry, in my book.
Those with maximum sized adipocytes eat the same fixed macro diet, sequester the same lipids in to their large adipocytes via LA augmentation of insulin's fat storage signal but then go on to release much of that extra stored fat by the increase in basal lipolysis which is associated with trying to further stretch large adipocytes. This supplies continuously elevated FFAs, with subsequent fat oxidation, despite the presence of glucose and insulin at the same time. They should be the least hungry.
What can a cell do when presented with a ton of FFAs and a ton of glucose, both having their uptake facilitated by insulin?

That's right. Resisting insulin is the correct option. That's what the systemic cells do.
The cost shows as elevated glucose in combination with the elevated fat oxidation (eventually FFAs rise measurably but early on the fat oxidation increase precedes the rise in plasma FFAs).
It is metabolic inflexibility encapsulated.
Of course the obvious question is whether that increased fat oxidation, associated with reduced rate of weight gain, is positively associated with insulin resistance. Alongside the reduced weight gain.
From the same institution, back in 1991 and forgotten about during the last 30 years, we have this paper:

Insulin Resistance Associated with Lower Rates of Weight Gain in Pima Indians
Insulin resistance is, indeed, associated with limited weight gain. As you would expect.
Summary overall:
Fat oxidation a major mechanism of insulin resistance. Increased basal lipolysis is a mechanism of both increased fat oxidation and decreased weight gain. Linoleic acid is the mechanism of increased adipocyte size to drive increased basal lipolysis. Some degree of insulin signalling is essential for linoleic acid to drive adipocyte size increase.
Life is logical.
Peter
Extra thoughts: During weight gain, while calories are being lost in to adipocytes, the rest of the body is in caloric deficit. Calories lost to adipocytes must be replaced by extra food. This is the correct arrow of causation. There is insulin sensitivity.
Once adipocyte basal lipolysis equals or occasionally outstrips fat sequestration in to adipocytes, the rest of the body is being provided with supplementary FFAs. It is in caloric surplus. Insulin resistance is then physiologically appropriate.
There is a gradual transition between the two states.
Posted by Peter at Wednesday, June 30, 2021

I think you got the wrong graph in slot #2 non log scale.

Thanks for the comment. The change between the two graphs is only in the numbering. I don't have the software to redraw the straight line of the log graph as a curve on a linear scale, you just have to look at the linear scale and convert that in your head to the implications of the log change in linear numbers. My bad. Should have made it clearer.

I suppose the majority of what I come across reported as science is today BS - but this GABA connection stuck me as interesting.. but missing a reference to a published paper.. There is the potential to sell a drug so remember to be skeptical.

Not sure what paper this is from:
https://scholar.google.com/scholar?hl=en&as_sdt=0%2C26&q=fatty+liver+gaba&btnG=

This reminds me of a condition that Taubs noticed - There are women that are absolutely skinny on the upper part of their bodies - but packing pounds below the waist. I've wondered if it had to do with nerve conduction? (There are autonomic nerves involved wit adipose tissue).. (Taubs used it to point out that it is not some moral failing - that some metabolic disorder was in play.)

So is it possible that the nervous system is involved in what controls the weight 'set-point'?

https://doi.org/10.1016/j.numecd.2018.09.014
Hi, this is substudy of dietfits. They found out, that similar weight loss of low carb and low fat diets resulted in differencies in fat cell size. Lc produced smaller fat cells, with more capacity left to expand...metabolic flexibility?

"To our knowledge this is the first study to demonstrate
weight loss-induced improvement in insulin sensitivity
and cardiovascular risk factors in nondiabetic individuals
limited to those with BMI < 30 kg/m2."
And they were insulin resistant...

"Thus, the present data suggest that the association be-
tween shrinkage in adipose cell size and improved insulin
sensitivity was mediated by mechanisms other than re-
ductions in circulating FFA." Interesting...

Day-long insulin decreased, as well as waist circumference and cell size (hand in hand). Since viscera is ca 4 times more metabolically active than wat, chronic (mean) insulin excess packs fat in the middle? Eliminate the excess, and waist responds fast (and liver). Which seems to happen in real life, if you moderate carbs (being insulin resistant /bathing in excess insulin).
JR

Of course people losing weight are insulin resistant. They are oxidising fat. Their drop in plasma FFAs may be non existent but without liposuction fat loss will always drop RQ/RER. Without the ROS/Protons concept you can just ignore any sort of conclusions to a paper.

I found this interesting paper about HSL knockouts. The outlook of the paper is not too obnoxious and the results are unexpected and interesting.


Some of this also relates to George's latest posting where he talks about stability of diacylglycerols, mag, etc.

For those who are not familiar with George, here's that latest post:

Hi Peter, may you explain something:
This sounds like a conundrum...
You are saying, burning fat increases IR.
So here is where I see the problem.
Let's take exercise as an example.
Muscles get
a)depleted of their energy reserves and
b)they burn fat
Both should according to you make them now IR.
But in reality they get very insulin sensitive which is why exercise before eating is so beneficial when it comes to metabolic health.
-> the kcal from the food will be preferentially directed into muscle instead of adipose.
So how can your theory be brought into alignment with my exercise example just given?
Or is there a wrong assumption somewhere?

Insulin resistance is a function of high physiological ROS generation, primarily by reverse electron transport though complex I. The requirements for this are a high FADH2:NADH ratio combined with a high delta psi across the inner mitochondrial membrane. During exercise there is an increased need for ATP which is met by increasing the consumption of the proton gradient by ATP synthase. RET is very sensitive to any fall in delta psi. So high ATP demand blunts RET and blunts insulin resistance. This is a Good Thing as the cell is energy depleted and needs to accept calories. The real question is why exercise does't cause hypos under ketogenic eating which will probably come down to AMP kinase and preferentially increased fat oxidation. Of course lots of PUFA will be more likely to allow symptomatic hypoglycaemia even without exercise, as in the drop-out from the (high PUFA) keto arm of Kevin Hall's study.

They even put this in the abstract!

Thx that makes sense. I forgot the importance that a low proton gradient has on ROS production.
With high PUFA keto diets causing hypoglycemia it would imply kcal loss into adipocytes compensated by increased hunger, wouldn't it?