There is absolutely no doubt in my mind that adipocytes can become insulin resistant. The most convincing paper I've come across is this one
Basal lipolysis, not the degree of insulin resistance, differentiates large from small isolated adipocytes in high-fat fed mice
They took adipose tissue from a group of mice which had been made insulin resistant, and obese, by feeding a high coconut fat/sucrose (ie Surwit-like) diet and extracted a supply of adipocytes. Whether these cells were large or small, provided they had been exposed to Surwit-derived conditions for eight weeks, they were all equally insulin resistant. Big ones and little ones. Size made no difference. Insulin resistance is real but not associated with adipocyte distention.
What they also found was that size of adipocytes was very closely and positively associated with basal lipolysis, that is with the rate of lipolysis in the absence of insulin or sympathomimetic agents.
This is not a new finding. From 1972:

I like this paper. I have certain biases, one of the strongest of which is that I like papers in which you are given the concentration of glucose which is used in their cell culture medium. Here they happen to have used 1mmol/l, which might rightly be considered a little low, but at least they tell you. Unlike many papers.
Basal lipolysis correlated well with cell diameter. If basal lipolysis is related to the function of lipid droplet surface proteins this is completely plausible and almost predictable. Here's their graph: 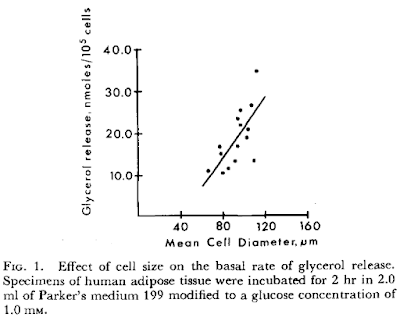 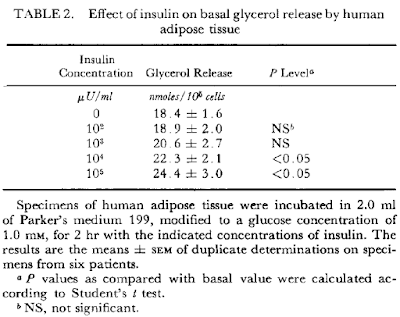 If anyone thinks this might represent insulin induced insulin resistance I might be tempted to agree, though the significance to anything physiological of exposure to 100,000microU/ml of insulin seems somewhat dubious.
They did find that physiological insulin exposure suppressed sympathomimetic induced lipolysis, an effect blunted by a grossly pharmacological overdose of insulin. Again, something confirmatory to my biases: 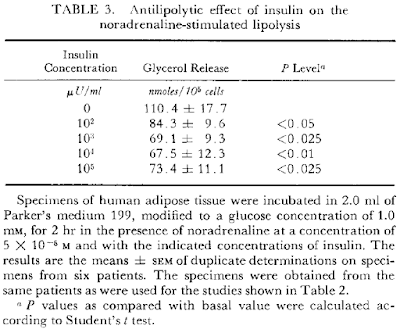 The take home message is that insulin is not particularly effective at suppressing basal lipolysis and that basal lipolysis increases with adipocyte cell size.
We have certain inter related processes here. Insulin facilitates lipid storage in adipocytes and we know that this function is both normally self limiting via ROS generation and is augmented pathologically by the oxidation of polyunsaturated fatty acids, leading to increased adipocyte size.
As adipocyte size increases the separate process facilitating basal lipolysis progressively increases, which cannot be suppressed by hyperinsulinaemia, certainly not completely.
Above a certain size it becomes almost impossible to suppress free fatty acid release from adipocytes using insulin. Under these circumstances there is a continuous supply of free fatty acids, despite the presence of insulin and a copious supply of post prandial glucose.
At a certain point the processes of augmented lipid storage and increasing basal lipolysis will come in to something approaching equilibrium.
The size of adipocytes at this point will be determined by the level of insulin being generated by the diet, the degree of augmentation of that insulin signalling by linoleic acid and whatever factors influence the rate of rise of basal lipolysis with increasing adipocyte size (currently unclear).
That's assuming a pancreas of steel which can crank out insulin at adequate levels to control glycaemia to non diabetic levels despite an increasingly un-suppressible fatty acid supply.
This will be relatively easy, provided adipocytes remain insulin sensitive. We know from
Diet fat composition alters membrane phospholipid composition, insulin binding, and glucose metabolism in adipocytes from control and diabetic animals
that it is perfectly possible to have insulin sensitive adipocytes, adipocyte distention and systemic insulin resistance without those adipocytes becoming insulin resistant themselves. Under these circumstances the is ample scope for further weight gain. Provided the pancreas can hypersecrete insulin, glycaemia can stay fairly well controlled as weight increases.
Whatever causes adipocytes to change from insulin sensitive, as in this last paper, to insulin resistant, as in the first paper, will markedly increase the demand for insulin to maintain normoglycaemia. If the pancreas cannot meet this demand or beta cells start to undergo apoptosis secondary to exposure to elevated glucose and free fatty acids in combination, progression to DMT2 occurs where insulin secretion can no longer control glycaemia, let alone FFAs.
With the onset of DMT2 weight gain will stall. It is perfectly possible to facilitate the process of further weight gain (and associated increased basal lipolysis) by continuing to squeeze more insulin out of the pancreas using a sulphonyl urea drug or by the injection of exogenous insulin. Both approaches appear to be favourites with diabetologists once they've started with metformin.
To summarise: Excess insulin sensitivity from linoleic acid, combined with elevated insulin secretion, expands adipocytes. Expanded adipocytes increase basal lipolysis, which is difficult to suppress. With increased basal lipolysis fat oxidation, whole body, increases and induces the normal physiological insulin resistance which occurs via ROS/Protons mechanism. Eventually reduced pancreatic function leads to diabetes primarily via the inability to secrete enough insulin to normalise glucose levels while FFAs are elevated.
There's more to this.
Peter
Posted by Peter at Monday, June 28, 2021

This is fascinating, even though I'm struggling to keep my head above water. Can I get someone's help with some basic questions:

1. Is "basal lipolysis" different from "lipolysis"?

3. I've been reading hyperlipid for many years. Until recently I assumed all cells in the body were at the same level in terms of insulin resistance. I'm finally realizing that adipose cells can act differently from other cells. Can someone point me to basic information on why there's a difference and how it occurs?

Nice, thanks. Healthy adipocytes probably shouldn't distend above certain limit but proliferate instead. Something is making them sick.

In this paper they used troglitazone (due to liver failures withdrawn diabetic drug) to make insulin resistant rats insulin sensitive. Seems related to the topic.

I had a similar question 1). I'd never heard of "basal lipolysis" until this post. When I googled it, the very first hit was the same as the first link in the post, which didn't help me much for a definition.

But when I googled "basal lipolysis definition" it led me to https://www.cambridge.org/core/journals/nutrition-research-reviews/article/regulation-of-adipocyte-lipolysis/08D91A549DE1C469D6265EDB5985B95A.

"Under normal conditions, the adipose tissue is able to fine-tune a series of neuroendocrine signals to precisely adapt the balance between TAG synthesis (lipogenesis) and breakdown (lipolysis) to meet physiological needs."

I haven't finished the paper, which is long and technical (for me, anyway), but the process says, "homeostasis" to me. Maybe someone can provide a better explanation.

Sorry Cave, I've been immersed in basal lipolysis for months now. I forget what a complete closed book it was to me in the early phase, how much reading it took to realise we don't know a great deal about how it is controlled (partly signalling from the proteins which coat the lipid droplet, as they stretch, they signal). It looks a lot like the system used by the sympathetic nervous system to facilitate lipolysis when we need it. It's controlled by the cyclic AMP signalling process. It's augmented by caffeine and some related drugs.

As research about weight control seems under the ascendancy of brain researchers obviously adipocyte physiology understanding is not much of a priority...

I actually started here https://pubmed.ncbi.nlm.nih.gov/26723122/ where the research is based on cattle, so side steps any b*llocks about hedonism re food, food addiction and other such junk science. Cattle research is also utterly financially driven (ketosis in dairy cows might wipe out a large chunk of the profit from a lactation) so unlikely to be influenced by religious dietary ideas. Then I found a huge human literature, which is reinvented every decade or so.

The stored lipid droplet is almost as complicated as a cellular organelle, has a phospholipid membrane etc.

Hi Martin, yes, true. Also rumoured is that adipocyte hypertrophy is easily corrected but adipose hyperplasia is un-correctable w/o adipocyte apoptosis. The glitazones activate PPAR gamma and signal the generation of more small adipocytes, linoleic acid will go on to fill these new small cells, combining adipose hypertrophy with hyperplasia. This strikes me as a Bad Thing, unless you like weighing 400kg. You can do the same with 4HNE, as they did here https://www.ncbi.nlm.nih.gov/pmc/articles/PMC3594100/ excepting that 4HNE also blunts insulin signalling (so doesn't transiently improve your lab numbers), something the glitazones don't, so your diabetic labs look better for a while as you gain some extra weight....

Linoleic acid as the core problem, its derivative 4HNE as a signal molecule a layer up, glitazones as a pharma disaster.

Is it right to say that basal lipolysis causes more fat ox in the liver, thus ROS/protons resists insulin action, which allows glycogenolysus even with post prandial glucose around in the blood, so T2DM.

Conversely, should diabetic numbers worsen while the adipocytes are shrinking under low carb esting, either basally lipolysing(?) at first, and then responding to energy demands via neuro/endocrine signals as insulin lowers...

... and then improve as lipolysis and weight loss stall, when insulin settles at nice new lower levels, letting energy demands be met by dietary fat?