I started here with with DNP

2,4 Dinitrophenol as Medicine
Several links came out of the paper. First was this one from Shulman's group
Controlled-release mitochondrial protonophore reverses diabetes and steatohepatitis in rats
The paper contains a great deal of information about the development of the sustained release DNP formulation, which sounds good. All we know about the rats and diets are that they were Sprague Dawley rats or Zucker Diabetic Fatty rats and the diets are minimally described as safflower oil 60% fat for NAFLD or methionine/choline deficient for NASH.
Bottom line is that a sustained release hepatic targeted DNP preparation is enormously safe and produces marked amelioration of liver disease in all of the models tested.
Using Bl/6 mice they also show that the degree of hepatocyte mitochondrial uncoupling was so minor as to be undetectable in a CLAMS apparatus.
Next is this one, again from Shulman's lab, where the hydrogen of the DNP hydroxyl group was replaced with a methyl moiety, rendering this DNP derivative inactive. This was then converted to active DNP primarily in the liver by cytochrome P450, with no detectable toxicity and no detectable increase in oxygen consumption on a whole body basis:
Reversal of Hypertriglyceridemia, Fatty Liver Disease and Insulin Resistance by a Liver-Targeted Mitochondrial Uncoupler
There is pretty convincing evidence that both of the above modified DNP delivery systems were fairly tightly targeted to the liver. Relatively little appeared to act on other organs and there is no information about the action on adipose tissue, but then these experiments were not looking for weight loss, merely controlling the liver damage/dysfunction of metabolic syndrome.
And the drugs do control metabolic syndrome. Here are the intraperitoneal glucose tolerance test results for the high fat fed Sprague Dawley rats, red being the treatment groups throughout: 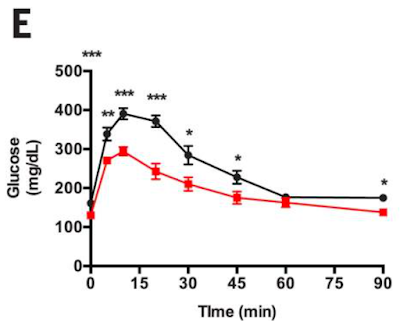 and the insulin levels at the same times: 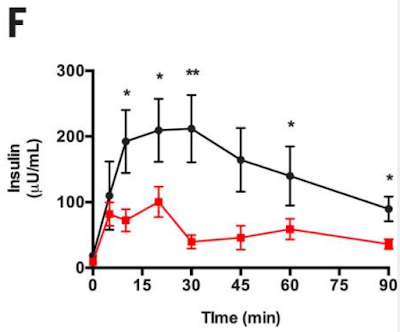 and the results for the Zucker Diabetic Fatty rats are even more impressive: 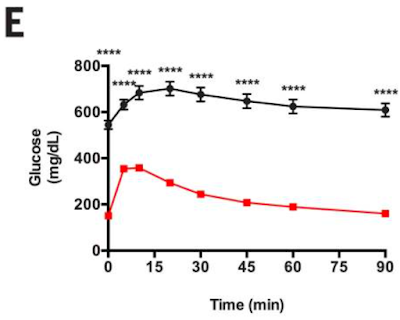 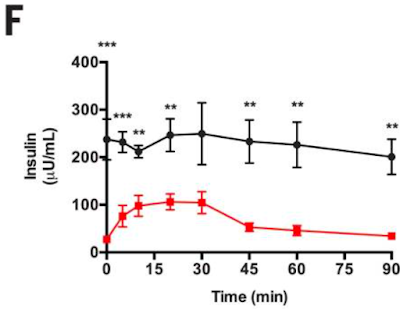 All of this is merely by limiting lipid accumulation within hepatocytes.
And the rats stayed fat.
You have to look at this and wonder: Here we have an intervention which primarily blunts insulin signalling originating from the mitochondria of hepatocytes. A drug which reduces insulin signalling and yet leads to a dramatic improvement of of whole body insulin sensitivity.
The parallels with metformin are striking
Peter
Posted by Peter at Saturday, June 19, 2021

It seems to me that both DNP and metformin would effect the level of the ROS signal - this signal appears to control the number of MT - having more might protect against MT-disease?

I'm wondering if there could be other unintended consequences as well?

My current thinking about the amazingly ignored T2D pandemic is it is probably caused by increased LA and/or fructose consumption. ( I've been thinking about how the combination might matter?).

Some contrary observations lead me to think that there is some genetic component as well - I know people that eat lots of one and/or the other that don't get fat - nor T2D. Seems some sort of multi-factorial understanding is needed.

Once DNA sequencing got cheap, the expected finding of single genes causing particular diseases collapsed. So now we talk about poly-genetics. I suspect that we might see recent selection pressure from the change to agriculture. There is grant funding pressure to not explore recent genetic changes - so strange. What gets funded obviously changes the narratives - there is selection pressure in the grant system itself.

-OT
I continue to think about why humans lost our fur - if high vit-D levels (>65) effect innate immunity AND brain development, that seems a much more satisfying narrative than avoiding parasites.

I mentioned before that I was disappointing in the little work I found on other possible photo-chemical-products produced in the skin. I did find papers on "low-level laser therapy" that might give hints - but these papers tend to be very poor - not controlling for thermal input for the most part - you would think the physics was rather obvious.

The story that Tucker told about no longer easily getting sun-burned on a low LA diet - I think would make an important study..

I've wondered if there is Russian work on sun exposure that I can't find - it seems it would be important at such high latitudes.

Indeed. I believe all almost all chronic diseases are on one spectrum and the root cause is lifestyle, largely diet. This would have a huge impact on everything from diabetes to cancer to Covid outcomes. And Alzheimer's. I've read several articles about the new drug Aduhelm, which was appallingly approved based on a surrogate endpoint (reducing plaque, which've never been definitively linked to causing the disease). Not a single mention of lifestyle changes preventing or improving Alzheimer's, just profit-driven pharmaceutical interventions. As with most things.

"I mentioned before that I was disappointing in the little work I found on other possible photo-chemical-products produced in the skin." What about Jack Kruse? Isn't he all about light?

Karl, much of the laser therapy material is concerned with near-infrared radiation. Where does ' thermal' begin and end? Sunlight us still the best approach, there are limiting factors. You know when you've had enough. With more restricted wavelengths, artificially generated, it us too easy to have way too much. Laser therapy is like turning sunlight into a pharmaceutical.

Fun fat facts: "BAT is adapted for thermogenesis rather than energy storage through the expression of uncoupling protein 1 (UCP1) that uncouples mitochondrial respiration, releasing energy as heat. BAT constitutes only a small amount of tissue in adults - approximately 100 g – and is structurally different to WAT, principally through a high density of mitochondria giving rise to the darker color. The quantity of brown fat present in individuals is inversely correlated with BMI and reduced or absent BAT causes insulin resistance and obesity in animal models."


In view of there being something like 24 litres of WAT in a healthy human vs only 100g of BAT, perhaps these targeted derivatives of DNP don't have to stimulate a huge amount of uncoupling to compensate for the pathological loss of BAT functionality?

So, why would BAT be reduced vs an increase in BMI? Is this another reversal of causality such that some kind of down regulation of BAT is the primary cause and BMI ie increase in WAT volume is taking up the load?


Going back to the ideas in (4)coconut:


think of asituation where there is huge sucrose dominated liver overload and it is pumping out significant amounts of fgf21 but the limited number of BAT cells just can't cope with it all. Perhaps they burn out? Or the insulin level is too high, calories are trapped. Mitochondrial damage on BAT it just insulin resistance? DNP would be a great solution in that case by spreading the load to non-BAT and/or stemming the overload at source, calming down the signalling too.

--- and the obvious possibility, that PUFA is a BAT killer.

@pass "In view of there being something like 24 litres of WAT in a healthy human.."

Really? That's like 6 gallons. Looking down at myself and trying to imagine that, there doesn't seem to be room for very much of anything else.

Up to 80 litres in the morbidly obese! Liver volume otoh averages 1.8 to 2 litres, and gets smaller as we age.

Just a five gallon bucket. Some of us smaller than others but unfortunately not me. Imagine how many pints of hh-pufa an average consumer of the SAD might contain?

Cavenewt, the average human that the 24lt figure relates to weighs ~66kg wuth a total volume of ~66lt so average WAT is approx one third of total body volume.

Any increases in weight are mostly increases in WAT weight. I find it much more disturbing and motivating to think that when I gain two kilos my volume has increased by two litres, about two US quarts and it's a lot harder to get rid of those quarts than quarts of water.