Why do Risérus, Willet and Hu get it so wrong? Apart from habit of course. Out by a Ferguson is their usual standard.
Dietary fats and prevention of type 2 diabetes
Just to regurgitate:

The intervention does exactly what it says on the can. Two five week periods with crossover. The subjects were rock steady for bodyweight throughout the study. Clearly it could not be blinded and the authors speculate that caloric intake might be under reported on the high PUFA arm because there are decades of indoctrination that the PUFA period was "healthy" eating (my phraseology!). I would add that they might even have subconsciously "accidentally" genuinely under eaten rather than under reported. It was only five weeks after all.
Here are the clamp results: 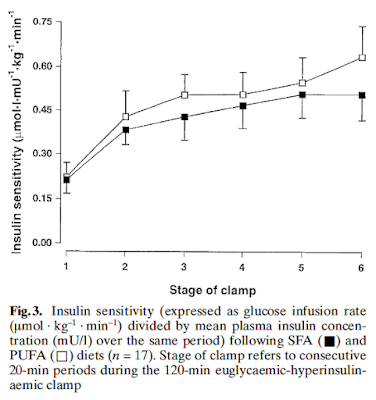 I think it's worth noting that at 120 minutes (Stage of clamp 6) that the glucose infusion rate per unit plasma insulin was still rising in the PUFA period but in the sat fat period the increase had stopped. From the Protons perspective this is the onset of insulin induced insulin resistance, apparently lacking in the PUFA rich period. Not commented on by the researchers but I have the eye of faith. Nice.
Converting the above graph to actual numbers here we have the results table here: 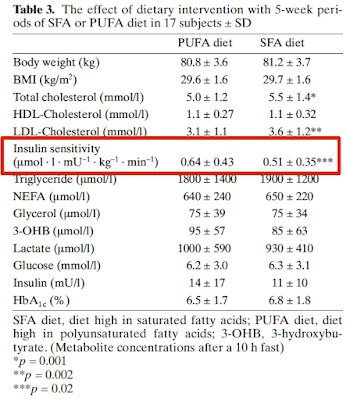 This is all classic Protons.
Protons says insulin signalling makes you fat. Improving insulin sensitivity, ie signalling, will ergo make you fat. Linoleic acid does this better than anything else, pax glitazones. Eventually insulin resistance will occur but only when adipocytes get big enough. This takes longer than five weeks, especially if you succeed in transiently limiting calories to less than those needed to replace calories lost in to adipocytes.
Back to Risérus, Willet and Hu.
To them life appears simple. Skinny people are insulin sensitive. Fat people are insulin resistant. If you could make fat people have the insulin sensitivity of thin people they would become thin. Or at least not diabetic.
Hahahahahahahahahahahaha! Bonk.
They really need Protons.
Peter
Posted by Peter at Sunday, November 28, 2021

It is so strange to me that these researchers still have no spark of recognition of the difference between transient, healthy insulin resistance and chronic, pathological insulin resistance. Nevermind that the former has a functional purpose, or that the latter is driven by a different mechanism than the former.

Would the next step be in having a model to predict when IS tips into IR? might be hard to do with the current crop of "WT" mice that clearly aren't wild for all intents and purposes (e.g. unusually long telomeres protecting them from drug toxicity)

Unusually long telomeres.....the Weinstein proposition and proven by Graber. However, do we know if Jackson lab altered breeding, quietly, to offset?

raphi, yes, the concept is in my head but the math is probably beyond me and the data re adipocyte size/lipolysis and even fat depot vs insulin sensitivity really means we don't have data for hard predictions. Being human I do pattern recognition. Sometimes the pattern is there, sometimes I see it when it's not!

Jonathan, yes and even the concept of pathological insulin resistance is adaptive under the circumstances it's needed in.

Hap, who knows.....? Apart from the Jackson lab people.