I don't like it much in terms of writing style, details included/omitted and perspective of the authors but their data look okay and confirm my deepest biases, so I like this aspect. 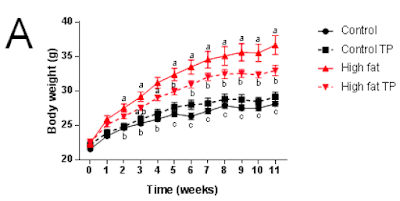 We can see that 4% of calories as trans palmitoleate partially offsets the obesogenic effect of just over 6% linoleic acid in Bl/6 mice.
In terms of adipocyte size the mean surface area on a histology section is normalised: 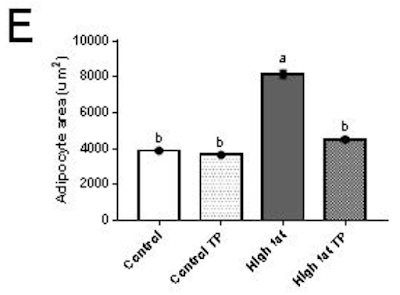 I would expect normal sized adipocytes to have normal basal lipolysis and not be causing excess FFA release in the presence of insulin. The study didn't look at insulin or insulin resistance but they mention various papers in passing where there are suggestions of this being the case.
You could, from isolated adipocyte studies, make a similar case for elaidic acid (ie shock horror, trans oleic acid, mmmm Crisco).

You can make the same case for trans vaccenic acid using whole rats:

In this next study they replaced 7.2% trans vaccenic acid and 3.4% elaidic acid (original Primex) with palmitate (Primex-Z) while maintaining 24% of the fat as LA. Much as I love palmitic acid it is not an active lipolytic agent in the way that the trans fats are.

Here are the weights at 16 and 30 weeks, first column is the control Bl/6 mice, second is the trans fat mice, third is the unopposed LA: 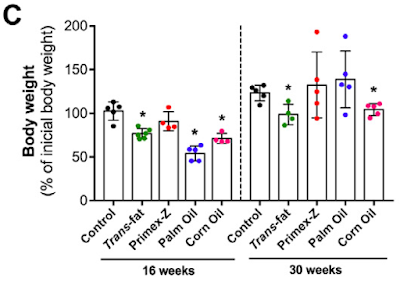 and here are the adiposity index results: 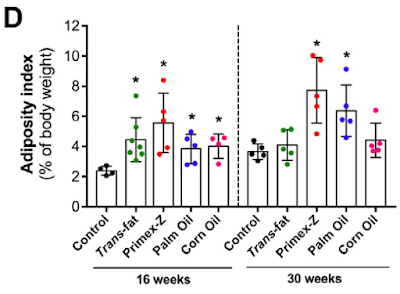 Sadly again no assessment of insulin function was made but with comparable adiposity to the control mice I wouldn't expect them to be insulin resistant. The corn oil group will have been pushing uncoupling levels of LA. By 30 weeks everything looks pretty much as I would expect it to.
So I might claim not to be trans-phobic. Except I support JK Rowling.

Why do Risérus*, Willet and Hu disagree?
[* That's Risérus as in The Muffin Study and Willet and Hu are the Usual Suspects]
Dietary fats and prevention of type 2 diabetes

Which is, of course, absolute, total bollocks.
There is a reason they make this mistake but this post is too long and rambling already.
Peter
Posted by Peter at Sunday, November 28, 2021

I missed something. Why are trans fats "active lipolytic agents"? Did you have a post about that?

Pass, is there any hope for mankind? Or should that be humankind? Hu-people-kind??

Struggling to find something to be offended about in that one!

I like it. Questions, questions, questions. I know this sounds silly, but I actually do go to bed thinking about trying to understand such stuff but, I also am comforted that far, far cleverer folk than me will forever seek to find something of the answer(s) to such, and so I thank you all for that. Slainte!


looks like % LA correlates negatively with % TFAs in animals. is this nature knowingly NOT pressing on the break and accelerator simultaneously?