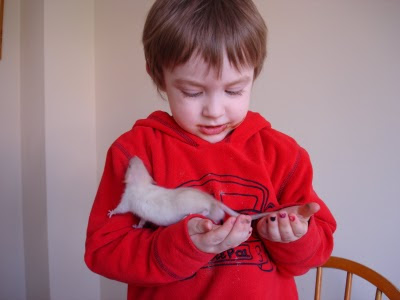 Ok, Ratty, myself and family really are doomed. Again.

How many times does this have to happen before I really start peeing glucose down the loo?

OK, finished that? Clever stuff. Are you scared of a ketogenic diet? Want to pay for the full text to see how I'm going to get diabetes? Don't bother, Emily that nice psychiatrist at Evolutionary Psychiatry has already sent me the pdf. This is what it will take you 30 seconds to locate: 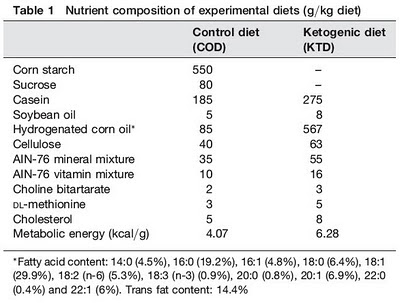 And this is the discussion on the relevant lipotoxin, with my translations in italics:


The present study used hydrogenated corn oil for dietary fat sources since it has less harmful effect on diabetes than lard, even though it contained trans fat.27

Translation: This study did not use hydrogenated corn oil. It used PARTIALLY hydrogenated corn oil, full hydrogenation would eliminate all trans fats. Bollocks statement number two is that trans fats have a less harmful effect on diabetes than lard. Ref 27 is an opinion piece/review by Walter Willett and friends. They suggest "Consumption of partially hydrogenated fats should be minimized". Correct. Willett's weird ideas on saturated fats are as well known as they are incorrect. There is no suggestion in the abstract of the cited review that trans fats are less diabetogenic than lard. Anyone can slog through the free full text to see if there is any justification for the beneficial effects of trans fats vs lard. I can't be @rsed.


The role of trans fat in the development of type 2 diabetes has not been as widely investigated.

Translation: Kathleen Axen beat us to this in 2003 but we're not going to mention someone who is that far ahead of us.

EDIT: Perhaps these jokers only read the abstract of the study in which Kathleen Axen was so limited on word count that any mention of trans fats was omitted from the said abstract. Perhaps Park et al only read the abstract and missed the fact that they had been pre empted by eight years on the glucose dysregulation effects of trans fats. Sigh, the penalty of tight word counts.... Back to translating the discussion. END EDIT

The Nurses’ Health Study,28 the largest and most detailed epidemiological study, showed a positive association between trans fat intake and risk of diabetes, with a clear dose–response relation.

Translation: The NHS is observational and suggests the hypothesis that diabetes is caused by trans fats in a dose related manner. Probably true but needs testing.

However, small epidemiological studies or those that did not include repeated measures of diet did not indicate a positive association.29


Tardy et al.30 showed that it [trans fat] does not seem to impair insulin sensitivity, at least in the muscle of rats.

Translation: The site of trans fat toxicity is not muscle. And so???? What about the liver, central to diabetes?

KTD [as used in the current study] did not reverse, but rather exacerbated, the effects of pancreatectomy-induced diabetes. Thus, hydrogenated corn oil was used as a dietary fat instead of lard.


And from the summary, the last sentence of the paper:

Therefore, KTD, but not ketone, exacerbates impaired energy and glucose metabolism in type 2 diabetic rats, suggesting that it may not be an appropriate dietary intervention for non-obese type 2 diabetic patients.

Translation: A ketogenic diet based on 14.4% of dietary fat in the form of trans fats will make you ill. Very ill. WE'RE IDIOTS.

Hold on a sec.
So, you're telling me I should stop mainlining trans fat?
Now that's crazy talk, sir.

I was a subject in the Nurses Health Study, and I do remember the food recall questionnaires. They asked about specific foods eaten at predetermined frequencies defined by the researchers. But I don't (and I don't think many others) eat most foods at regular, predictable intervals. In other words, I may eat liver three times one week (because it was on sale, and I had to cook it all) and then not again for several weeks. I eat fruit and vegetables in season. Etc. So that liver example becomes less than once per week, and I don't know how responses like that are interpreted.

Serving sizes were also based on recall. Ha! to that. Who has any notion of serving sizes when dining at restaurants?

And ingredients in restaurant foods? Again - no notion about what is in dishes, quantities, nutrients, etc.

If recall is to be used, I would advocate for having subjects use something like PhotoCalorie or at least databases akin to Nutrition Data. Again, n=1, my experience was that despite my best efforts to recall every morsel that passed my lips when I was trying to establish nutrient intake, I would inevitably forget to document something. In my case, I came to realize that I was grazing and not paying attention to eating. So I don't tend to think that most people lie about their food/beverage intake as much as them not being aware of it.

Having reformed my diet (Paleo work in progress) and no longer suffering from unending hunger and appetite, I can much more easily recall what I've eaten because I've intentionally prepared and eaten it as fewer & substantive distinct meals instead of continually fueling the furnace.

On the other hand, there's this: Cafeteria Diet Is a Robust Model of Human Metabolic Syndrome With Liver and Adipose Inflammation: Comparison to High-Fat Diet which seems far more interesting!

Thanks Peter for the usual greasy analysis of a hyperstupid study.

Might also be worth steering clear of too many oral glucose tolerance tests if you're on a low carb ketogenic diet too.

Peter! This is exactly why we love you. Thank you!

I agree with Tessan. Thank you for another stellar exposé.

It seems to have similar effects on surrogate markers for CVD (at high doses) as do industrial trans fats...

Peter, are you concerned about mainlining CLA? If not, why?

How on Earth do these papers get published?
And why can't these types of 'researchers' do a basic analysis of the stuff they are giving their subjects?
If there was ever any sort of food shortage during our past, surely it would be those people who had the sharpness of wit and swiftness of foot (despite surviving on ketones) that would survive to continue the race.
And in the end, one has to take into account one's own experience when deciding what to believe ... OH and I have always felt sharper and fitter on a ketogenic diet, get heart palpitations, dizziness, heartburn, digestive upsets and lethargy on carbs.

Vaccenic and rumenic acid (cla) are unsaturated at a different position from the artificial trans fats found in partially hydrogenated oils. They are actually beneficial, not harmful.

Well I do worry about CLA. This molecule is one of the darlings of the nutritionists, with so may benefits to mankind that it gets massive funding for research groups. That worries me. The general rule seems to be that funding generators are bad for you. But, what the hell, if the cows can survive these products of their symbiants' metabolosm and make a point of giving them to their offspring it might not be all bad...

And to worry about surrogate markers for IHD implies a belief in the lipid hypothesis. You know where that has gotten us....

I'd be interested to hear an update on Ratty from time to time. Is he still doing well on his high-fat diet? I'm curious to see how his body composition/health changes as he ages. Thanks!

Quit yanking our chain. Are these guys idiots or what?

Fully agree that surrogate markers for CVD may be totally worthless. But, I worry that they are actually be only partly worthless.

Besides, if you don't believe that surrogate markers matter, there is somewhat less of a compelling case against industrial trans fats too.

@kurt, CLA and vaccenic acid demonstrably worsen markers of CVD in humans at doses achievable on a high-fat diet, like the one many of us consume. My instinct is similar to Peter's that the generally accepted "wisdom" that CLA is good is itself concerning.

I too am somewhat skeptical of CLAs benefits, as they are unproven in humans, but I don't believe the CLA you get in a ruminant fat based diet is likely to be harmful even at levels that are "easily achievable". My man point is the population of TF species is different between natural and artificial trans fats.

Markers (like LDL levels etc) are not heart attacks.

So which "markers"? Reference?

Hey Peter,
Sorry to go off topic here, but thought you might like this. I just had coffee with a vet student (at the top ranked vet school in the US), and they get a grand total of 3 hours of nutrition training. Oh and copious funding from Hills pet foods.

Peter,
If this issue keeps coming up in studies (use of vegetable fats) you'd think someone with a biology degree would understand that vegetable fats are higher in oxidative Omega 6s. Wouldn't this make a great research topic to study the effects of a ketogenic diet compiled of pastured meats only? Pastured Dairy only? And Pastured eggs only? Then do a study of equal parts of the 3 and see how they effect the creature?

I mean, I am just a designer and I know the difference between pastured butter and Crisco...

Hi perishedcore, I too am a number in a health study, UK Biobank. The level of dietary specificity is rubbish over here too...

Daniel, the problem is that the study would be likely run by Dr Park or a clone there-of. I'm guessing this project was probably the bulk of his/her PhD thesis. Such a person is hardly likely to trash the work they got their doctorate through..........

Hi Alex, one scoop for one chicken, two scoops for two chickens, three scopps for.... I remember nutrition lectures

I've looked at the diet questionnaire of the nurses study - It is silly to think of it as science.

This is why we know so little about most diet influences - yet we do know with certainty the effect of fructose on triglycerides.