There is a huge body of work on the requirement for DHA, its lipid peroxides, its use in the body but almost nothing about its bulk disposal. As in what happens to the excess DHA when you drink 60% of your total daily calories as fish oil, for weeks. As a rat.

I've been chasing tenuous leads as to whether DHA is catabolised in peroxisomes, in mitochondria or in both. I'd like a nice clear cut answer, but you can't always have what you want. It's clear that DHA can only be synthesised in peroxisomes because it requires elongation from ALA to eventually form a 24 carbon PUFA which is then shortened by beta oxidation to the C22 DHA. Only peroxisomes appear to deal with the beta oxidation of C24 fatty acids. For C22 and especially C20 it's not quite so clear cut.

On that basis I'm willing to go with peroxisomes as the main site of DHA catabolism, grudgingly and without hard data. Peroxisomal degradation is particularly difficult to justify from the simple FADH2:NADH ratio because DHA has so many double bonds that it's not going to drive reverse electron transfer through complex I. But it might be too fattening of course...

While searching I came across this study:

which provides a number of points which need discussion, but for today I'm looking at following the reference trail back through DHA and peroxisomes.

The trail is good at level one backwards, with a nice paper on reagent grade DHA gavaged in to rats, but beyond that it drifts off into partially hydrogenated fish oil (goodness only knows what that contains but it undoubtedly induces peroxisome proliferation) and beyond that in to very long chain mono unsaturated fatty acids which do the same thing but neither helps me with DHA/EPA catabolism.

So I'll just start with the DHA gavage paper today

The biggest problem with it is that for a lot of the work they were using group sizes of three rats. You don't do stats with n=3 group sizes, so I see it more of a proof of concept paper.

Rats were ad-lib fed semisynthetic diets (experiment I) +/- added cholesterol (experiment II). They were also gavaged with 500mg/kg, 1000mg/kg or 1500mg/kg of pure DHA daily for 10 days. Controls got nothing or palmitate 1500mg/kg/d. I'll come back to experiment III later.

Control rats grew at normal rat growth rate. DHA at 500mg/kg increased weight gain over the 10 days, 1500mg/kg did not, giving a comparable growth rate to controls. Using 1000mg/kg/d varied in effect but that's probably due to n=3 group sizes. Palmitate at 1500mg/kg/d is not obesogenic (well, whodathunkit?).

These are the numbers, relevant weight gains outlined in red: 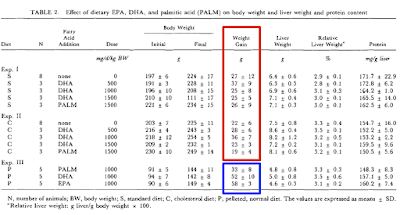 Experiment III is even more interesting. Here they fed the rats ad-lib on a then-current 1993 style fairly high quality crapinabag, possibly something a bit like 5001. They gavaged EPA as well as DHA and had palmitate as control, all at 1000mg/kg/d, there was no untreated control group. This time we have n=5 rats. From the blue square palmitate gave 33g weight gain, DHA 52g and EPA 58g over 10 days. I particularly like this as DHA might be peroxisomaly directed but EPA, being shorter, less so. I get the impression this is not "all or nothing". DHA looks as if it might simply go through mitochondria if there is just a little of it around. If there is a lot it around it induces peroxisome proliferation and peroxisomal beta oxidation. Putting double bonds through mitochondria should produce fat gain, through peroxisomes less so. If you have my biases. Of course we have no idea re fat gain vs muscle gain in these rats.

The thing which struck me is how neatly you can control weight gain by choice of dose of DHA and by choice of background diet. I like it. Rats are so like people.


It's also interesting to look at Table 5 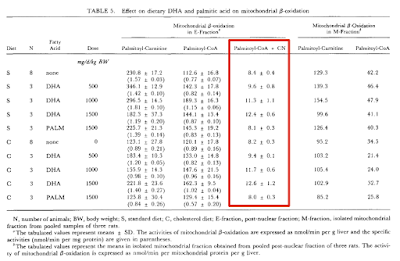 The column of interest here is outlined in red again. This is the ability to oxidise palmitoyl-CoA in the presence of potassium cyanide. Because KCN completely blocks the respiratory chain at complex IV any oxidation of palmitate in its presence is exclusively within peroxisomes. Increasing doses of DHA increase peroxisomal palmitate oxidation. Given high enough DHA ingestion peroxisomal activation appears able to over ride the weight gain effect of low dose DHA.

Adding DHA or EPA to a particularly healthy low fat/high complex carbohydrate diet might make the weight gain worse. In a rat.

Does this mean anything for humans?

Perhaps if you are going to take fish oil, take lots. Or, better still, none at all.

Oh, and, as far as I can see, no one has ever taken radio-labelled DHA and fed it to isolated peroxisomes or isolated mitochondria and looked at labelled metabolite or CO2 production. The test fatty acid has always been palmitate. Which is odd.
Posted by Peter at Tuesday, September 15, 2020

Off topic but I just learned now that Jordan Peterson's wife was diagnosed with kidney cancer. They're on an all meat diet. Have you tweaked yours?

Hi alt, I'd heard she had a cancer, didn't know it was renal. There are lots of questions but you have to consider Sauer's rats...