This study gives an idea of what happens when you drink 4-HNE:

Here are the diets. The rats on heated soybean oil (HO) ate relatively little so all of the other groups were partially starved to the caloric intake of the HO group. 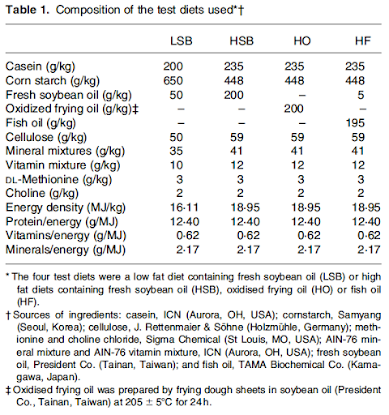 and here are the weight gains (green circles).

Note especially how thin the 4-HNE fed rats (blue rectangle) were and how the fish oil fed rats (red rectangle), even under caloric restriction were still the fattest, fatter even than the fresh soybean oil fed rats. On the same calories.

This diet had no sucrose, it was starch based. Like the rodent chow in the last 4-HNE post which gave the greatest weight gain on DHA or EPA. Starch diets seem worse than sucrose diets when mixed with fish oil...

Back to 4-HNE. These rats were mildly glucose intolerant too. Glucose was ns different from controls throughout an OGTT but the area under the curve was greater under 4-HNE.

In this case we have, I would speculate, 4-HNE causing insulin resistance within adipocytes, limiting fat storage (ie reducing loss into adipocytes), so limiting hunger by actually reducing fat gain.

And doing god only knows what other damage along the way to these un-arguably thin rats. As the authors suggest, the HO diet could even be destroying the beta cells of the pancreas...

Addendum HT to raphi for this link in the comments. Well, that's cool

"And doing god only knows what other damage along the way to these un-arguably thin rats. As the authors suggest, the HO diet could even be destroying the beta cells of the pancreas...

OxLDL is of course largely HNE, at least in human oxLDL.

And a whole slew of tweets on HNE and adipose tissue

(V. interesting to see where this is heading now. You're racing on ahead, can't keep up. )

I'm curious about the lsb branch in these diets where the victims had the lowest weight gain on high starch but low fresh soy oil - lipid to approx 10.5% of calories vs the other branches where it was approx 35%

However, reading through the paper they certainly worked hard to produced their oxidised oil: iron wok heated to 205'C frying up sheets of dough until the oil volume was reduced to half! It's not going to be simply 4hne and other lipoperoxides in there from the acyl groups but also significant acrolein from the glycerol moieties. Acrolein is a nasty aldehyde which is a direct biocide, recommended daily exposure less than 7.5ug per Kg. And lots of varnish --- soy oil is classed as a drying oil, used to make yer actual paint.

Some researchers are digging away at low linoleic soy oils although there is some confusion as to whether it is low linoleic or linolenic. Seemingly neither in the Huang et co work above! However there seems to be something weird about soy oil even before it is brutally toasted:


Abstract: Soybean oil consumption has increased greatly in the past half-century and is linked to obesity and diabetes. To test the hypothesis that soybean oil diet alters hypothalamic gene expression in conjunction with metabolic phenotype, we performed RNA-seq analysis using male mice fed isocaloric, high-fat diets based on conventional soybean oil (high in linoleic acid, LA), a genetically modified, low-LA soybean oil (Plenish) and coconut oil (high in saturated fat, containing no LA). The two soybean oil diets had similar, albeit non-identical, effects on the hypothalamic transcriptome, whereas the coconut oil diet had a negligible effect compared to a low-fat control diet. Dysregulated genes were associated with inflammation, neuroendocrine, neurochemical, and insulin signaling. Oxt was the only gene with metabolic, inflammation and neurological relevance upregulated by both soybean oil diets compared to both control diets. Oxytocin immunoreactivity in the supraoptic and paraventricular nuclei of the hypothalamus was reduced while plasma oxytocin and hypothalamic Oxt were increased. These central and peripheral effects of soybean oil diets were correlated with glucose intolerance but not body weight.

Is it the linoleic, the linolenic, Or something else???

Pass, I looked at that study a while ago and found it somewhat incomprehensible, as the authors seem to have done. All that gene profiling without knowing what it remotely means. I certainly don't!

..."they certainly worked hard to produced their oxidised oil: iron wok heated to 205'C frying up sheets of dough until the oil volume was reduced to half! It's not going to be simply 4hne and other lipoperoxides in there from the acyl groups but also significant acrolein from the glycerol moieties..."

Reading the Wikipedia entry on acreolein is hair-raising enough. I don't know if the "glycerol moieties" come from the dough (evil wheat!), but doesn't this procedure defeat the purpose of controlled-variable reductionist research that requires things like lab chow with specific ingredients?

Yes cave, when I first read the study (a while ago) and found the lack of weight gain in the rats inexplicable as I hadn't the thought processes I have today. The glycerol comes from the glycerol backbone of the triglycerides. So we could just say the animals were too ill to eat. I think Tucker has raised this. Or we could go the insulin resistance taken beyond physiological route... All options.

Peter, yes it certainly has a whacky body of text. I'm trying to work out if there is any usefully clear signal outside of their stated aims and conclusions.

Cavenewt - I think whenever you start getting any fats up near their smoke point temperatures or just heating them in reactive metals like iron, there are going to be serious undesirable consequences. Better off to boil than to fry. Unless you want to make varnish - if Huang and co. had just thrown in a little pine resin to 15% they would have ended up with a beautiful dark red oil varnish. Btw I saw a video about people deep frying potatoes in plain molten pine resin. Uggh.