Okay, its time to look at this paper:

We have four diets, two based around low fat (10% fish oil or 10% lard), each with a little soybean oil thrown in. The other two were 60% of calories from fat, either from fish oil or lard, both with generous soybean oil added. Fatty acid composition was measured by gas chromatography. I've replaced the percentage of lipid as linoleic acid with percent of total calories as LA written in red. 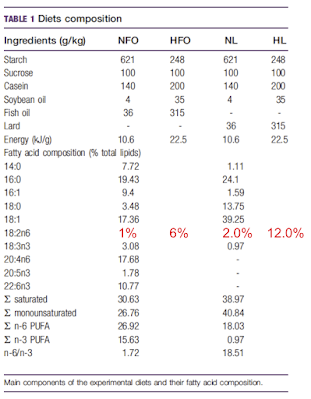 Notice the study altered protein levels in addition to switching starch for fat. Talk about failing to control your variables.

Then we just have to feed ad-lib for eight weeks and look at the weights. In fact we can actually look at the fat mass in addition to weight, which is much nicer. We can also look at the energy efficiency, weight gain per unit calories absorbed. Note the columns have changed order, I've again added the linoleate percentages of calories in red, highlighted the energy efficiency in blue and circled the results of interest in green: 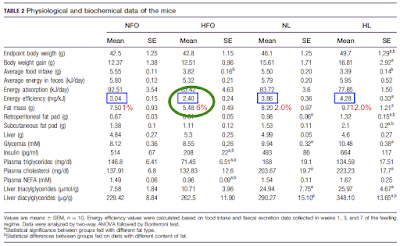 I did a rough back-of-the-envelope calculation for the number of mg/kg/d of DHA consumed by the mice fed the 10% fish oil diet. It works out as around 1250mg/kg/d on a semi-purified diet background, so probably in the peroxisome activating level.
Obviously the amount of fat stored roughly follows the LA content of the diet outside the green circle anomaly.
Notice that the "average energy absorbed" is lowest in the fattest group of mice. These animals are not making fat out of nothing. To understand this you have to go back to this image from a long time ago: 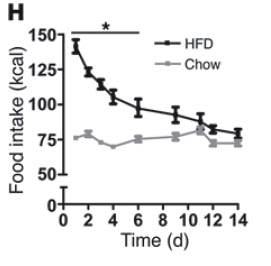 The top line is HFD (D12492, fed to Long Evans rats). All of the "hyperphagia" needed due to rapid weight gain occurs during the first 10 days and is only statistically elevated during the first 6 days. If the averaged food intake of the mice in the current study is lower than the brief "hyperphagic" phase this would explain the low overall calorie intake. The effect might be exacerbated in part due to the strain of mouse used, in this case the Swiss mouse, which is not prone to obesity in the way that many rodent strains are.
I started to look at these mice in terms of energy budgets. The mice are fed ad lib so are all going to eat exactly as much food as they need. No more, no less.
The high lard, high LA fed mice need 77.85kJ/d to meet basal metabolic rate, thermogenesis, cage exploration and this will also include a modest loss of calories in to their already distended adipose stores. They can do all of this on 77.85kJ/d. This is what they need.
The high fish oil fed mice should need very slightly less than 77.85kJ/d because they are lighter, so have less tissue to support metabolically, ie have minutely lower BMR and, again being lighter, it takes less calories to move themselves around their cage. They are also barely losing any fat in to their adipocytes. Despite all of these small combined contributions to decreased caloric needs they still have to absorb more calories (83.42kJ/d) than the fat mice to support a significantly lower weight and fat mass.
Clearly they are losing some of those extra calories but in this case the calories end up in peroxisomes rather than in adipocytes. I would predict that these mice will have a normal body temperature (this is tightly controlled in awake mice) but they will be physiologically adapted to dissipate excess waste heat. At 20degC this is easy for a mouse, it normally spends more calories on thermogenesis than it does on BMR at this temperature.
So the thin mice are unable to meet their basic caloric needs without having to "over-consume" food to make up the deficit induced by heat generation. In peroxisomes. They are not overeating and then using heat generation as a technique to stay slim. They are eating enough food to meet their needs but the lipid sources in their food are intrinsically and wastefully heat generating.
Just as the fat mice are fat because they lose calories in to adipocytes due to linoleic acid, so the skinny mice are skinny because they lose heat calories through their skin due to DHA in peroxisomes.
Ad-lib fed mice never over or under consume calories. They eat to meet their needs. Exactly.
Peter
Note that the mice fed 10% of calories fish oil "over-consume" to total 92.51kJ/d. They need more daily calories than the 60% fish oil fed mice because they are losing some calories in to adipocytes. That poses some more questions. As does the low oxygen consumption in the fish oil fed mice. An interesting paper. More to think about.
Posted by Peter at Thursday, September 17, 2020

So will quantities of fish oil improve my abysmal cold tolerance in the winter? ;)

cave, probably yes, at 60% of calories that is. But... There may well be a price to pay from all that DHA in terms of longevity, and peroxisomal proliferation may not be invariably a Good Thing. However diversion of lipids from mitochondria to peroxisomes might be the benefit of the CPT1A gene mutation in coastal Inuit in the arctic regions... There are lots potential of threads to this. And 10% looks like it might be different to 60% and.......

Does protein increase thermogenesis in mice? If so, can we conclude anything about the changes in fish oil amounts here?

I think this is a bit earlier than the cpt1a work but interestingly relevant.

Maybe looking at erucic acid ( c22, mufa ) could help with the peroxisome / mitochrondria problem ? There are a good amount of studies about it ( for example https://www.google.com/url?sa=t&rct=j&q=&esrc=s&source=web&cd=&cad=rja&uact=8&ved=2ahUKEwigqaz2qPXrAhUO3qQKHe5NDOIQFjABegQIBhAB&url=https%3A%2F%2Fwww.jbc.org%2Fcontent%2Fearly%2F2020%2F06%2F03%2Fjbc.RA120.013583.full.pdf&usg=AOvVaw3LDeklnbTS7pa6PxBXwpSE Peroxisomal oxidation of erucic acid suppresses mitochondrial fatty acid oxidation by stimulating malonyl-CoA formation in the rat liver ).

Peter, excellent find. I love the "remarkably increased the cytosolic NADH:NAD+ ratio" which is also Bad News. I would expect fish oil to do exactly the same. And the malonyl-CoA is interesting. The next post mentions about malate as possibly being used to carry NADH equivalents out of the peroxisomes. Most of the refs I've read seem to think carnitine might be the carrier to shuttle acetyl moieties and MCTs out of the peroxisomes but hard facts are thin on the ground and those -CoA derivatives look like possibilities...