I like this study, it's the one I always call "The Spanish Study" in my head:

Distinctive postprandial modulation of β cell function and insulin sensitivity by dietary fats: monounsaturated compared with saturated fatty acids
It was specifically designed to show that fat raised insulin and that saturated fat was particularly bad in this role.
It produced this graph: 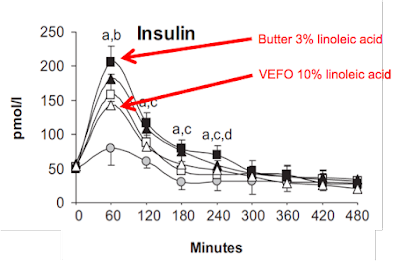 Let's imagine the group leader has sketched out in advance the above graph or something like it which he wants the PhD student to aim for as their results.
Group Leader: How are you going to generate these graphs?
PhD student: Well, seems like a pot of yogurt, a slice of bread, some plain pasta and a dose of each type of fat might work...
Sadly life is not quite that simple. The insulinogenic components would need to be chosen to produce a small but measurable insulin response. Not so small as to be undetectable but not so large as to tax the pancreas or overwhelm the effect sought. Then there had to be enough fat to augment insulin secretion and generate the appropriate resistance to that signal, within the normal physiological range of pancreatic function. So the amount of fat would have to be very carefully adjusted to give an ideal amplification of the carbohydrate/protein insulin signal. In the end it turned out to be necessary to adjust the quantities of food directly to the body surface area of the participants, not a fixed meal and not even calories merely adjusted to bodyweight. The use of body surface area is normal for calculating doses for various highly toxic treatments such as chemotherapy because dosing has to be as precise as possible in this instance. Turns out this dose/surface area was needed to correctly dose the fat (50g/m2) and pasta (30g/m2) to illustrate the double bond/ROS effect. The yogurt and plain bread got a free pass.
But they did all of this successfully, got the "down" on saturated fat and polished the halo of olive oil.
I'm both impressed and grateful.
Now let's go back in time to the 1980s and look at this study:

The agenda in this study is to show that fat blunts insulin response to carbohydrate ingestion but causes delayed insulin resistance during the following meal. They threw in a butter group and a peanut butter group. Here are their results, I've chopped off the right hand end about the follow on meal as it's not relevant here: 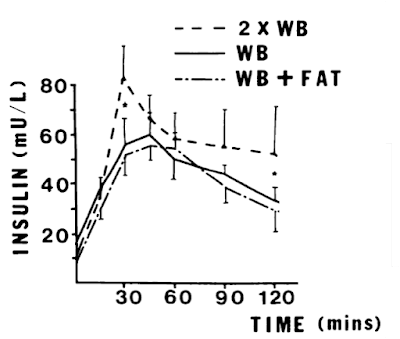 We can also ignore the 2 X WB line which was just 480kcal of bread with a smear of cottage cheese. The lower two lines are bread alone  vs the same dose of bread with some fat. Both fat sources produced results which were indistinguishable so were combined. The insulin response is exactly the same with or without fat, saturated or unsaturated..
How do you reconcile the two studies?
This second one used a fixed calorie meal with 50g of carbohydrate and 25g of protein. Fat provided around 25g for each meal.
The dose of insulinogenic substrate was well over half of the calories in the meal, the fat well under half. The total gross insulin response was to the bread, not the fat. The amount of fat was insufficient to make any detectable difference to that insulin response.
Just compare the insulin values achieved in each study, the Spanish study use a fat-free insulinogenic stimulus raising insulin from 50pmol/l up to about 70pmol/l. The bread meal raised insulin from around 70pmol/l (10mU/l) to around 400pmol/l (60mU/l), even without any added fat! There is no scope for picking up any effect of the fat, let alone from the nature of the fat. The bread effect was approaching maximal, even though it didn't quite max out the pancreas as much as the double bread meal did.
Ultimately you design your study around the result you want to generate. Sometimes it's easier than others.
The Spanish study was remarkably cleverly done but looks like they had to work hard to get the results they wanted. I still like it, even though I markedly disagree with their interpretation of the findings.
Peter
Posted by Peter at Monday, April 05, 2021

You missed your calling Peter, you should've been a forensic analyst - excellent analysis!

Haha, as Yoda never said about me, but could have done: "The confirmation bias is strong in this one"...

It's all the mitochlorians, giving you hundreds of volts of extra bias.

Glycaemic index-wise white bread has as high or higher GI value than glucose itself. It raises blood sugar fast. Typical shop bread has added sugar being more a plain sweet dough pumped up with CO2 gas rather than fermented. Yeast never gets near it to convert any of the sugar, and the added sugar gives it a nice crust effect. Wheat starch+sugar+gas can never end well. I'm always amused that the usual source of CO2 in the tankers at the bread factories here is of subterranean origin, volcanic. It's demon bread from the inferno.

However all I was going to note is that in the second graph it looks like the total area ie insulin integral under the curve for bread alone is greater than for bread plus fat. As you'd expect --- the fat slows down the digestion of the mixed meal.

Hard to know what to think of the gymnastic contortions in the Spanish paper apart from the unintended e.t.c. implications.

That is the strangest way of calculating how much you have to give someone to eat. Amount per body surface area? What?

So, their theory is that saturated fat is more insulinogenic than PUFA.

Dare I say this is two sides of the same coin? I mean, you are both possibly correct; it just depends on how you look at things.

Yes, and we look at things from diametrically opposite directions!

Any diet that works - HAS to create insulin resistance. Insulin resistance is what lets fat leave adipose tissue(fat cells). ( You can also get into ketosis by any calorie restriction - normal people are in ketosis when they wake up - and this state NORMALY includes some insulin resistance - that would let us burn some of our fat stores.)

There is nothing wrong with being insulin resistant late every night as you sleep.

Obese people report being quite hungry in-spite of plenty of fuel to run the body. The problem is obviously a disease of over-storage - which leaves people tired and --> HUNGRY. They also tend to have sky-high insulin levels - so the system is seriously broken - one way out is to eat low carb to bypass insulin BG control. But long term I think a sane/competent medical community would be addressing PUFA consumption.

So what alternative narrative explains an over-storage disease? We know that PUFAs create inappropriate insulin sensitivity - which is what drives the over-storage.

LPL moves fat in to fat cells. HSL moves fat out of fat cells.
insulin is known to activate LPL in adipocytes
HSL is inhibited by insulin.

The error in thinking comes from seeing the control loop as only insulin. (I have a hunch that different cell types might do the insulin vs insulin sensitivity math somewhat differently? - possible genetic bits etc.. )

What 'everyone' knows about insulin is misleading. The narrative states that:
"Insulin regulates energy consumption and blood sugar levels in the body. "

While not exactly untrue, what it leaves out is so huge that it is misleading. While insulin has an effect on BG levels; the relative sensitivity to insulin is just as an important part of the control loop - Relative sensitivity - relative to the current insulin level.
But then...

Insulin also has MANY other effects::

The bad news is the PUFA's seem to have a very long half life -- and if people have a flaccid body - lack muscle mass - I think the body responds by ramping up insulin -- making a rather perfect storm.

(I read a number of 600days as the half life of LA - I saw where Tucker had a somewhat shorter time - couldn't find his source? )

Body surface area is a proxy for weight (assuming constant density and shape). It's used in kidney function too. I must look up how it's calculated - my guess is a table of BSA as a function of weight.

Shouldn't it be other way around--weight as proxy for body surface area. Since weight is easier to obtain than surface area, why weight should require any proxy?

There are simple conversion tables for clinical use, certainly in dogs. Gotta get that vincrystine dose in the correct ball park...

It compared olive oil to butter, measured all kinds of interesting things. As in 1999, the data is more interesting than dogma repetion. They measured even the incretin hormones! They tried to separate chylomicron from their remnants!

To me, this sat fat thing is real. It increases insulin response at pancreas level. Maybe the half life of insulin in plasma is also somewhat increased due to induced insulin resistance?

They were worried of the trigs and ffa increase postprandial by the butter. Maybe they showed why people loose appetite after proper food; there is more energy in plasma; same glucose but more fats of every kind.

Remember Gabor showing the incretin effect (GIP)on bread, butter and butter on bread. Fat on carbs is much more than the sum of incredients individually.

Trying to get my head around this.

However, it seems ok to have a bit carbs to stop the lipolysis, and then measure the effect of meals or fats in meals in this case. Without aberration, said the danish study referred above.

In real life, you don't need lipolysis stopping carbs. The fat-protein combo was not tested.

Incretin effect means by itself, that no one is actively guarding the upper level of blood sugar. With IV glucose, there has to be ffas around. The more saturated, the stronger the guard. Pufas fly under radar; they are not recognised as real energy by pancreas. The whole system is based on sat stearic and palmitic acids, and oleic oil, and glucose? All of which body can produce. Maybe insulin is energy guardian, of which glucose is a tip of iceberg?

Confused, feel free to help me out.
JR