Here are the diets by weight of ingredients 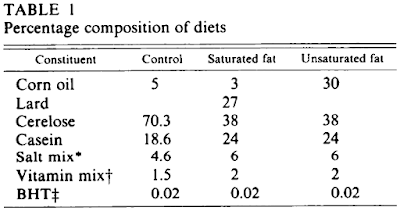 I think it's unarguable that the weight gains are only trivially different between the three groups. It becomes clearer when you look at lard in terms of linoleic acid level as opposed to accepting that it is "saturated fat". Modern lard is around 12% linoleic acid. It might have been a little higher or lower in the 1980s depending on how much adulteration with cheap seed oils the manufacture could get away with in those days or what the pigs were fed on 40 years ago. Lets go with 12% to include the splash of corn oil thrown in.
The control diet is reported as 16.8% total calories as fat and both high fat diets as 52% of calories from fat.
That makes the control diet around 9% linoleic acid, the lard diet 12% linoleic acid and the corn oil diet around 28%.
At 9% LA the control diet is already obesogenic. The lard diet is a bit worse but not in a different ball park, much as I would expect. The fascinating one is the lack of excess weight in the corn oil group, the group with the diet used by the Cairo study as their obesogenic one.
The easy part is to assume that all of the diets in the Jacobs paper are obesogeic, as is the corn oil diet used in the Cairo study. All of these rats gained about 150-180g. The control diet in Cairo was unspecified chow. If it contained 4% or less of linoleic acid we have a plausible explanation for the low weight gain in that control group. We just have to explain why the rats in Jacobs' paper on 12% LA weighed about the same as those on 28% LA.
This is very important to me. There are a series of papers using very high LA diets, especially Safflower oil based, which show minimal obesogenic effects and even the ability to partially reverse lard derived obesity. Something I have been thinking about for years.
Peter
Posted by Peter at Thursday, April 08, 2021

The evidence seems to indicate that some amount of SFA/MUFA is required to really pack on the pounds, after the LA has primed the system in that way. This seems to also correlate with the human epidemiological data, where low-fat societies like India get ill from excess LA, but not obese in the same way they do in America on a higher-fat diet.

"Weighing in on the hidden Asian American obesity epidemic"

Or compare Japan to China, where the genetic background is similar but the obesity rate is not. DHA is protective in rodents, seems to also be protective in humans. Just doesn't protect against everything.

Lots of interesting interplays between fatty acids which are evident, but not yet well understood.

Tucker, thanks for linking that 2018 post, fantastic and great commenters too. I have been lurching through your blog posts recently, lots of things to "digest". This one where you summarised a few references for an interview

With that graph of in vitro peroxidation of pufa vs glucose concentration, and eg


Suggest that hyperglycaemia really drives damage from pufa, well, drives it as hard as cooking/pre-peroxidising it does.

Well, we have to remember that n-6 pufa also drives hyperglycemia...

"The lack of stimulation of gluconeogenesis in the Clinoleic vs. the Intralipid group suggests that different classes of fatty acids exert different effects on glucose kinetics in preterm infants."

Mice don't get hyperglycemia in quite the same way humans do, so they have to use STZ to stimulate it.

It's a nasty little nested set of feedback loops.

Slightly sideways from that, do you have any thoughts about how consuming copious quantities of h-h-pufa actually might lower LDL 'cholesterol' ie the mechanisms. I have a hunch at the moment that either SFA or mufa or pufa or anything will have the same effect due to short term lipoprotein dynamics, namely the Feldman hack. You just would need to keep doing it for longer to sustain the effect ......

I think it would be natty to be promoting the idea that consuming copious quantities of saturated fat lowers ldlc.

To be clear I don't believe that lowering ldl is an important thing to do but I do like the idea of this bit of reverse propaganda.

I spent some time in the Philippines in 1986 - and 1996 - I saw almost no obesity - like traveling back in time to 1960s USA - but now, T2D is hitting and even children beginning to be obese to the eye. (My wife consumes a steady supply of pictures from the Philippines - the change is obvious to my causal observance. )

When I was first there, people were selling buckets of lard to cook in - others would sell coconut oil. The lard was from pigs that ate much less corn than here in the US. Today, there is cheap vegetable oils for sale on every corner.

Of course this is just a correlative observation - but I think if you measured T2D over time and compared the time lag from when imported concentrated seed oils hit the market - there would be a phased correlation - which is more than a simple correlation.

I think that the inappropriate insulin sensitivity explains the over-storage seen in obesity - might be worth some effort to identify alternative theories that might cause over-storage - the obese seem to be extremely hungry and tired - what other markers would support that over-storage is robbing them of needed energy?

I also wonder if a diet high in LA might cause permanent damage?

,.,
The other bit I keep thinking about is zombie-cells - if the above hyperglycemia also pumps up insulin - blocking apoptosis - what is the result? Early aging?

One can fast to push apoptosis, but there are 'Senolytics' that might provide clues - I've seen claims that some of the polyphenols act as senolytics.

So I wonder - what if I take a mega dose of quercitine, fast, take a dose of interferon - induce a fever .. (probably should try it on my cat first.. he is getting old and tired)