The mice with access to corn oil ate more calories than those without: 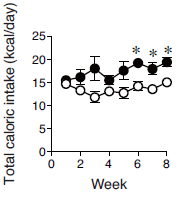 but most calories weren't from chow, top line is grams of chow only, bottom line the weight of chow eaten when there is access to ad lib corn oil: 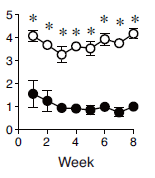 We can look at the total amount of corn oil consumed: 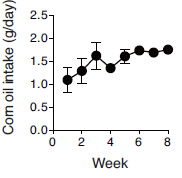 Assuming 9kcal/g we can now reverse engineer that to 16kcal of corn oil a day as part of a total daily intake of 19kcal. So that's 84% of calories from corn oil. As 55% of this 84% is linoleic acid that gives 46% of calories as LA. Well in to the weight loss range of intake noted for high LA safflower oil, in fact that's verging on a self selected ketogenic diet, which complicates matters a little.  With 16% of calories from chow this will also be rather low in protein, though far from zero carb. Just look at the RER if they have access to corn oil, the black circles. Yes, these mice really are oxidising lipid and very little else, but also bear in mind that exactly the same effect could be obtained with safflower oil under far from ketogenic/low protein conditions. Here are the RERs:

Anyhoo. What was the end result? These are the body weights at the end of the eight week trial:

More calories, more oxygen consumption, same body weight.
This looks like a generic property of linoleic acid in exactly the same way as weight gain is at lower levels. The Jacobs study rats were around 24%, on the border between obesogenic and weight limiting effects, on the obesity side.
To get weight loss you need to go higher with the LA.
Just before I finish and post some speculation about mechanisms it's clear from the rest of this study that uncoupling is the answer to the paradox. In modern mice this is mediated through UCP-1 within the interscapular brown adipose tissue, as the paper went to considerable lengths to demonstrate.
This is the current level of development in the modern evolutionary terms of rodents. It's a sophisticaled high level system which will overlay the insulin system which will overlay the ROS system. It is perfectly possible to make a case for why this high level system is advantageous by thinking about the underlying ROS system.
I'll have a discuss about that in the next post.
This series is looking at body weight. Using an approach to normalise body weight which involves the incorporation of markedly unsaturated lipids in to the inner mitochondrial membrane does not strike me as a sensible thing to do. Might be a technique for looking good in your coffin.
Peter
Posted by Peter at Friday, April 09, 2021