Pyrococcus furiosus is an interesting organism. It has a penchant for living in environments at around 100degC. It looks like it has occupied this niche for a very, very long time. It has a proton permeable, Na+ impermeable cell membrane. At 100degC constructing a proton tight membrane appears to be bloody difficult.

At some point Pyrococcus hopped from an alkaline hydrothermal vent to a volcanic black smoker type hydrothermal vent. It went, as I've argued, with a proton leaky membrane using Na+ energetics to generate ATP. Given the tools available, how did this work and what do the metabolic fossils look like?

An alkaline vent driven proto-Ech is core. It uses the proton gradient to reduce ferredoxin using molecular hydrogen. Proton (and hydroxyl) permeability is essential to neutralise the entering protons and allow the process to be continuous. At the time I wrote the Life series I felt this was unlikely to be a reversible process. I was wrong, it is. 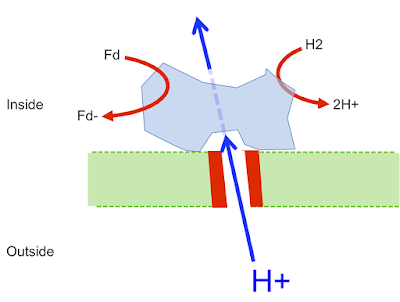 And here it is slightly tweaked, running in reverse, pumping protons pointlessly out through a proton permeable membrane and generating hydrogen as waste: 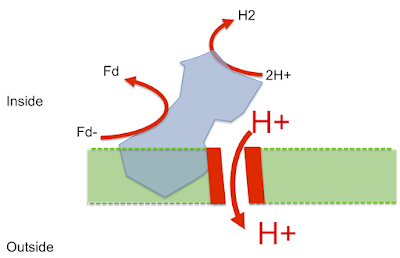 Whatever the initial advantage of extruding Na+ from the cell might have been the major subsequent development was the formation (twice) of the Na+ ATP synthase. This Na+ ATP synthase is, ultimately, powered by the ocean to vent proton flow and permeability to protons (and hydroxyl ions) is still essential to maintain the influx of protons.

At this time life has available a proton pump, a proton leaky membrane, a proton/Na+ antiporter and a Na+ ATP synthase.

There is no point in pumping protons across a proton permeable membrane, especially if you leave the vent and every ferredoxin molecule becomes precious and life must become frugal.

What if you physically joined the proton pump and the antiporter together? So that the pumped proton stayed within the pump-antiporter complex and was never actually freed in to the environment, but was simply delivered to the proton entrance of the antiporter? So as to return to the cell, exchanging a Na+ ion outwards? Like this: 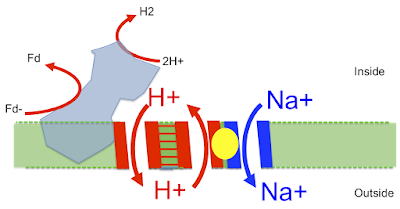 The cell membrane is still proton leaky, Na+ opaque and an Na+ ATP synthase is driven by the Na+ gradient. Like Pyrococcus furiosus today.

Does Pyrococcus have this reverse proto-Ech physically coupled to an antiporter?

Here is the image taken from this superb paper Structure of an Ancient Respiratory System: 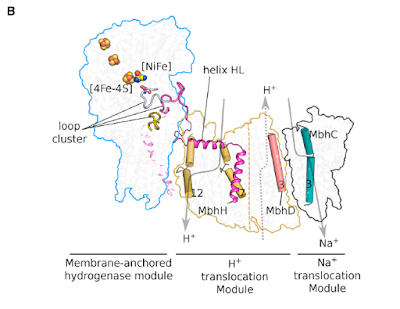 That's how it is. I think what Pyrococcus does is a derivation of exactly what LUCA would have done to leave alkaline hydrothermal vents. It's preserved due to the chance environment which makes proton tightening of the cell membrane impracticable...

Genuine Ech and Complex I are different, they use similar subunits but the redox component is on the opposite end of the intramembrane/antiporter section and this looks to be a later derivative to me, secondary to a proton tight membrane and the change to using proton pumping with blocked Na+ ingression, a far more complex process (accidental pun). And there are other Na+ pumps too. But this one in Pyrococcus, it's the one which should be there. And it is.

Yes, it's elegant and it's real! There's a ton of other interesting stuff in the paper too, from the MBH subunit M structure through to the structure and derivation of MBH subunit H. Which ties in to where the actual MBH pump might have come from. Doesn't look to be quite as simple as "reverse proto-Ech". And as for the complex I stuff...

finally got round to reading your proto-Ech posts !I'm still working my way through the others

It's also getting clearer where each channel comes from, how they are arranged and maybe how they work. Haven't worked through the paper on that last aspect but it looks informative. Obviously the folks working on complex I, MBH and even Mrp don't have the framework laid out in the life series to set some sort of context. That must be hard!